MANILA, Philippines — Actress Angel Locsin called on singer Jimmy Bondoc to “not wish ill of others” after he said he is excited for the fall of the “biggest” television network, referring to ABS-CBN.

“Magtulungan tayo at wag magsiraan. Let’s not wish ill of others rather let’s look for proper solutions,” Locsin said Thursday in a tweet.

This was after Bondoc expressed excitement for the shutdown of the network and called it out for its “manipulated” contests, news “for sale,” among others.

But Bondoc clarified he is not happy to see people losing their jobs, saying “When a network (any network) closes, it can mean a change of management or ownership. Ibig po sabihin, deserving employees would probably be retained.” 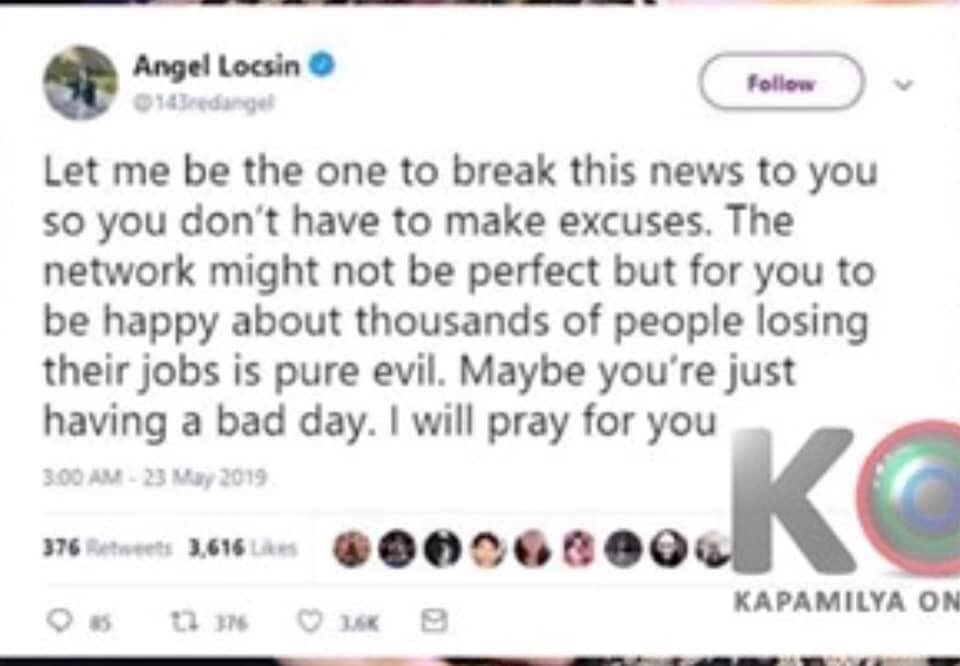 “As you said ‘when a network closes it CAN mean a change of ownership,’ keyword is can. I’m speaking for the thousands of employees that will have no job security if this happens. The assumption I gave is coming from your statement that you are excited for the network to CLOSE,” Locsin told Bondoc.

“I am not a lawyer nor am I a politician. I have no knowledge of how it was acquired. I’m just a human being hoping for a peaceful resolution to this problem so that thousands of jobs can be saved,” she added.

The actress also responded to Bondoc’s allegations regarding sexual favors and supposed rigged contests inside the network.

“If ever any of these has happened to you or anyone you know pls report it to the proper authorities. Don’t just rant on Facebook. Your rant discredits the artists that truly worked hard to get where they are,” said Locsin, who is being managed by ABS-CBN.

President Rodrigo Duterte previously threatened to block ABS-CBN’s franchise renewal which will expire in 2020. This was after the network allegedly did not air his campaign advertisement that was already paid during the 2016 presidential election.  (Editor: Mike U. Frialde)