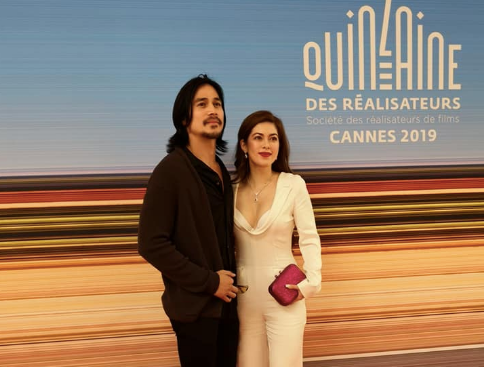 Piolo Pascual and Shaina Magdayao were spotted together at the Cannes Film Festival in France.

Photos of the two at the Palais de Festivals were shared on social media by Film Development Council of the Philippines chair Liza Diño on May 23.

Magdayao donned a white jumpsuit with a plunging neckline and carried a hot pink clutch for the occasion. Pascual, meanwhile, looked carefree and understated in black trousers, polo and a brown cardigan.

Magdayao has since taken to her own social media account to excitedly share about the prestigious film festival. She posted photos of her during the opening ceremony of the festival where she wore a floral dress by Marikit Araviso.

“We made it to #CANNES2019,” Magdayao said via Instagram on May 22. “Humbly representing the [Philippines] for Lav Diaz’s film, Ang Hupa/The Halt.”

The auteur filmmaker was unable to attend the film festival. Diaz said in a recent interview his teaching commitment at Escuela de Internacional de Cine y Television in Cuba was the reason behind his non-attendance at Cannes this year.

“I feel bad, but I’m cool with it,” the Filipino filmmaker and director said. “But my [‘The Halt’] actors and producers are going to Cannes. So, we’re well-represented.”

“Ang Hupa (The Halt)” is Diaz’s latest film and is entered in the Directors’ Fortnight, an independent section held parallel to the Cannes Film Festival.  /ra

‘Surreal, surprising’: Piolo and Shaina on the Berlinale red carpet