Robin Padilla on supporting pro-admin candidates: ‘I did it for country, fellowmen’ | Inquirer Entertainment

Robin Padilla on supporting pro-admin candidates: ‘I did it for country, fellowmen’

Robin Padilla stood up against critics calling him out for supporting pro-administration candidates, allegedly for money and personal interest, as per his Instagram post last night, May 22. 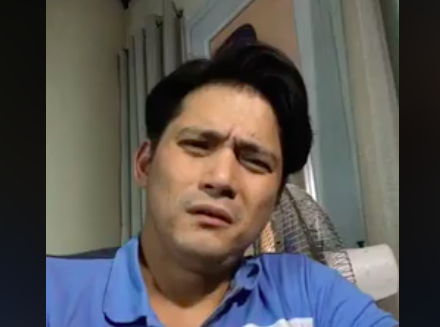 The action star shared quote cards expressing his love for the country and how the handling of money can impact one’s life.

(If [you are doing it] for your country, you should not be paid.)

(To those who have not yet recovered from the results [of the elections], I want you all to remember that we are not enemies because we are all Filipinos and revolutionaries.)

“Ito lang ang iiwan ko sa mga taong naglaan ng panahon para ako’y gibain at sirain kasama ang aking pamilya. I did it all for the glory of God, country and fellowmen, never of money or power,” he stressed.

(This is my statement to those who have dedicated their time to ruin and destroy [me] and my family. I did it all for the glory of God, country and fellowmen, never [for] money or power.)

(I had misunderstandings with other people because of beliefs and principle.)

While most of Padilla’s friends and followers praised him, some followers remained firm on their criticism of Padilla’s pro-administration stance. One @ahhhrlyn told the actor, “Oh really? For your country and fellowmen, talaga lang ha (really).”

At that point, Betchay Vidanes, film producer and talent manager, responded to the netizen to defend Padilla.

“Manager ako ni [Robin Padilla]. Meron ka bang alam na binayaran siya (I am the manager of [Robin Padilla], do you know anything about him being paid [for his personal stance])?” Vidanes asked. 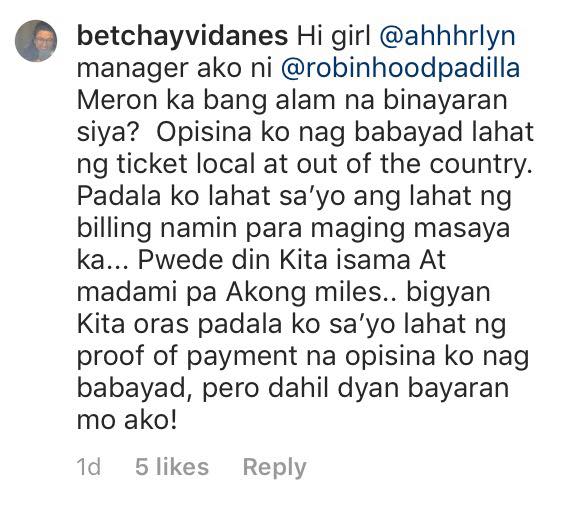 Padilla responded to the manager, advising her to ignore the commenter. 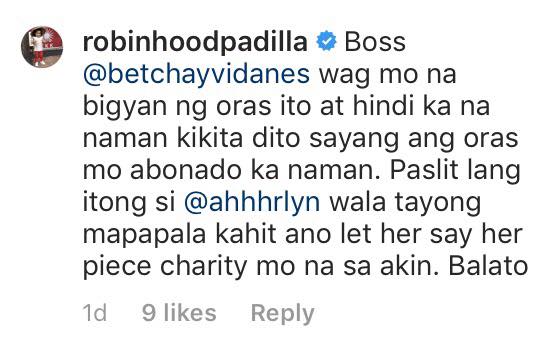 Robin Padilla has been a known supporter of President Rodrigo Duterte since the 2016 elections. In the recently concluded 2019 elections, he was active in campaigning for senators-elect Christopher “Bong” Go and Ronald “Bato” Dela Rosa.