Where will we see Emilia Clarke, Peter Dinklage and Maisie Williams after ‘Game of Thrones’? 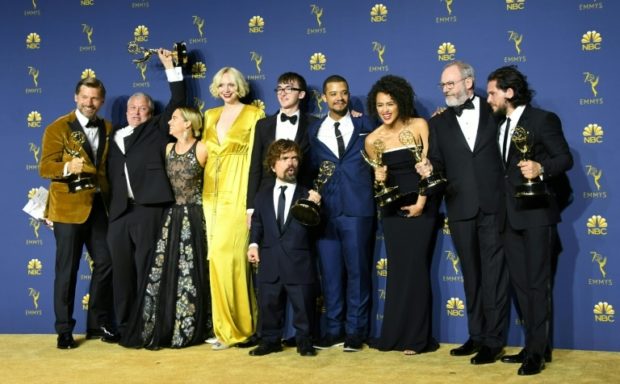 The ‘Game of Thrones’ cast, pictured in 2018, have contributed to a record-breaking haul of 47 Emmys. Image: AFP/Valerie Macon

While some, like Kit Harington, will take a much-deserved break after the end of “Game of Thrones,” whose final episode was broadcast in the United States on May 19, other members of the cast are already working on other projects for the small and silver screens. What is in store for the actors behind the inimitable Tyrion, the fear-inspiring Daenerys and the indomitable Arya?

The season finale of Game of Thrones’ final season has seen the end of eight years of endless wars for the control of the Iron Throne. And while the conclusion has left some of its hordes of fans wanting, the actors were able to say their goodbyes to the characters they brought to life over the show’s eight seasons. The door to “Game of Thrones” might be closed, but other projects are already on the horizon for some of the series’ stars.

Mere weeks after the end of the series, the actress who played Sansa will be back on screens as Jean Grey in the movie “X-Men: Dark Phoenix”, in U.S. theaters June 7, opposite Michael Fassbender and James McAvoy. She is also slated to appear in Matthew Coppola’s forthcoming thriller “Broken Soldier.”

The other Stark sister will be playing Rahne Sinclair, aka Wolfsbane, in the Josh Boone horror flick “The New Mutants,” out April 3, 2020 in the U.S. She is also cast in thriller “The Owners,” directed by Julius Berg.

After meeting her fateful end as fear-mongering queen Cersei, the actress will do a 360 and join the cast of “The Flood” in the role of Wendy, a British immigration agent fighting for a refugee’s rights. The drama will see her reunite with one of her former co-stars, Iain Glen, who played Jorah Mormont. The film is set to be released by the end of 2019.

The Danish actor also finds himself reunited with a former partner, Carice van Houten (who played GoT’s Melisandre), in the thriller “Domino” in which he will be playing a Copenhagen policeman. The film, slated for release sometime in 2019, is being directed by Brian De Palma.

The actor will be lending his voice to the character of Mighty Eagle in “The Angry Birds Movie 2,” coming to U.S. theaters August 14, and to another animated character, Phil Betterman, in “The Croods 2” (alongside Ryan Reynolds and Emma Stone). He will be seen again on the big screen as the star of Brad Anderson’s drama “The Dwarf.”

GoT’s Khaleesi will be trading in her dragons for Santa Claus’ elves in Paul Feig’s upcoming comedy “Last Christmas.” She will be sharing the romcom’s bill with Emma Thompson and Michelle Yeoh. The film is due out in the US. on Nov. 8, 2019.

The Mother of Dragons’ best friend will be leaving HBO for Hulu to star in the TV remake of “Four Weddings and a Funeral,” co-created by Mindy Kaling. Her fans will be able to stream her once more from July 31. RGA

Read Next
How Maris Racal worked with her idol Rico Blanco
EDITORS' PICK
Mallorca City: Home of Cavite’s finest industrial hub
Gamboa to regional chiefs: Stop jueteng in 1 week or face relief
The fight of the decade: The Gypsy King vs The Bronze Bomber
Gamboa: Let provincial chief deal with Espenido’s ‘gag order breach’
Tokyo 2020 postpones volunteer training over virus fears
Gov’t sends home 30 Filipino repatriates as quarantine period ends
MOST READ
Honda to shut down Laguna plant
LOOK: Heart Evangelista wears ‘Quiapo headband’ at Paris Fashion Week
Mark Bautista on love: ‘She has to be understanding of my situation, that I’m bisexual’
It was DILG that blamed Estrada for Manila’s failure to pass standards – Isko Moreno
Don't miss out on the latest news and information.