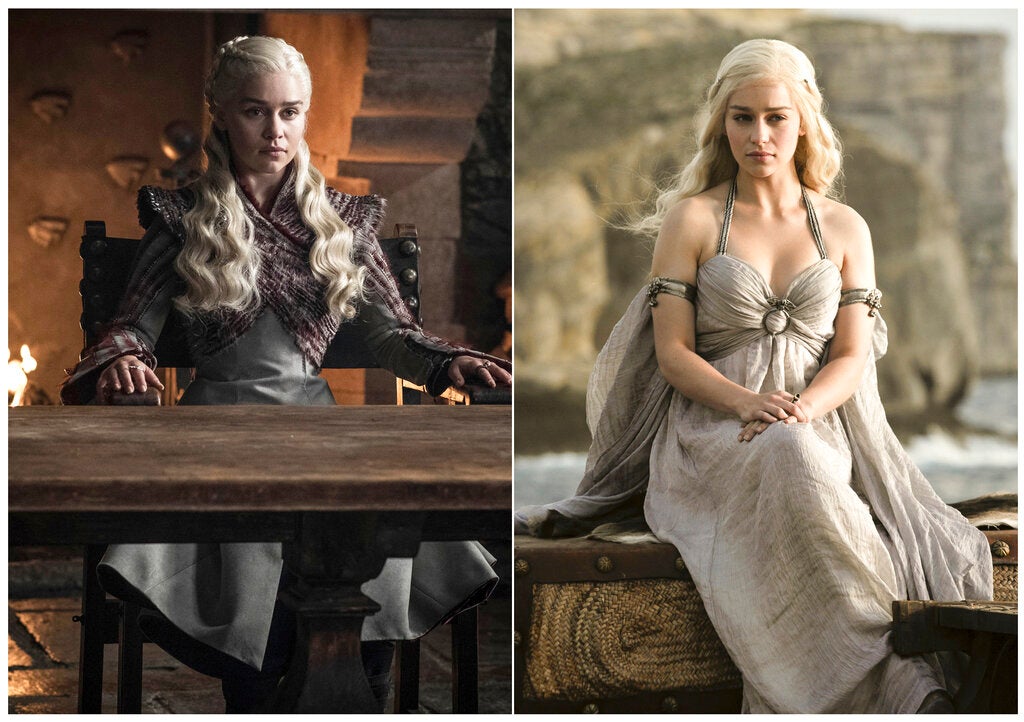 This combination photo of images released by HBO shows Emilia Clarke portraying Daenerys Targaryen in “Game of Thrones.”The final episode of the popular series airs on Sunday. (HBO via AP)

LOS ANGELES — When season eight of “Game of Thrones” began, The Associated Press examined the arcs of the major characters who had survived the bloody series until its final season. With Sunday’s finale of the HBO show looming, here’s an update on where those characters stand after an action-packed season of zombie-mobbing, dragon-torching and secret-revealing. Will Daenerys end up ruling the Seven Kingdoms? Jon? Sansa? No one? And how many really want to anymore? Warning: MAJOR SPOILERS throughout.

Is there anything more powerful than the Mother of Dragons aboard her favorite son firebombing the city of King’s Landing into oblivion? Maybe the fan backlash. Daenerys went from flawed heroine to heel in the season’s penultimate episode. That spawned Twitter outrage, a petition demanding a do-over, and perhaps regret among the hundreds of American parents who, according to the Social Security Administration, named their daughters Daenerys or Khaleesi back when she was breaking chains instead of burning innocents. Many viewers, however, thought it a logical, even inevitable, turn of events. The daughter of the Mad King had just seen her best friend beheaded, her longest-serving retainer killed in battle, and her cherished birthright cast in doubt by the man she loves. Now, having conquered the capital, with a ruthless army still intact and her dragon seemingly unstoppable, she has everything she once wanted, except Westeros’ love. Having horrified her closest allies, will she hang on to it all? Fall to the sword of an angry Stark? Can her conscience return as quickly as it left?

Is it possible that after eight seasons, Jon Snow still knows nothing? Even after he rose to become lord commander of the Night’s Watch, united enemies to fight the army of the dead, came back from death himself, and learned he’s not a bastard but a Targaryen who should be heir to what’s left of the Iron Throne, Jon appears to be as confused and aimless as when he began. He refused to force his birthright, yielding power to his queen, aunt and apparent ex-girlfriend Daenerys, and then watched helplessly as she burned King’s Landing and most of its inhabitants. Will he find a way to rise once more and fight back against this destroyer version of Dany? Will he use his newfound dragon-riding skills to somehow hijack Drogon into triumph? Such a heroic end would require more of him, but the narrative of the show has never given up on Jon.

Arya could have wandered into the woods and disappeared halfway through the season and she would have retired a legend. She used her years of assassin training to kill the Night King when all seemed lost at the Battle of Winterfell, snatching the savior-of-humanity role from her big brother Jon Snow. She’s killed most of those responsible for her mother and brother’s slaughter at the Red Wedding. She even lost her virginity on her terms in a moment of mature empowerment rarely afforded to women in this world. (The thousands of parents who named their daughter Arya are feeling just fine.) But her role has become uncertain since. She turned away from her attempt to assassinate Queen Cersei in the last episode, and seemed to have sworn off a life of revenge. But then she became a firsthand witness to Daenerys’ atrocities. Is there one last name on her kill list?

Sansa sat out the last episode, and she chose the right one to miss, staying safely in the flame-free North at her family home. As the show’s ultimate survivor — and the character who has grown and learned the most since she started as a prissy princess in waiting — it is easy to imagine her as ruler of an independent Winterfell should the finale play out that way. But the major figures of Dany and Jon still stand above her — and in her way.

In the show’s first episode, Bran was forced to behold a beheading. Since then, seeing things has become his specialty. He’s become desensitized to looking on such horrors, assuming a mystical role as the Three-Eyed Raven, timeless seer of all. He’s played a crucial role at various points in the story this season, revealing to his Jon his true identity, luring the Night King for his sister Arya to kill, and dispensing some essential bits of wisdom. But it’s hard to imagine him doing anything other than meditating into snowy eternity as the series ends.

Tyrion has become an expert at survival and reinvention, but as Hand of the Queen he has failed miserably this season in trying to rein in Daenerys and steer her toward diplomacy over destruction. He was technically still in Daenerys’ service when the last episode ended, and in one of very few images revealed of the finale, he is shown walking through the ruins of the city. He could take one last stab at counseling the seemingly now-mad queen, or maybe use his proximity to her to attempt a literal last stab and sacrifice himself to save the realm.

Cersei stayed at the center of the action for the first seven seasons but had nearly nothing to do in the eighth, watching from a window and drinking wine as her fate played out. Part of this was by her own design — she and her army sat out the Battle of Winterfell with hopes her rivals would be so weakened by the army of the dead that she could hang on to her kingdom. Never a leader who inspired loyalty, she tried to use human shields to hang on to her throne. But Daenerys turned out to be just as ruthless, and that meant Cersei’s end.

Jaime found his redemption this season, then decided he didn’t want it. He defied his twin sister Cersei and fought gallantly with his former enemies the Starks against the army of the dead. He used his own knighthood to bestow knight status on Brienne of Tarth in one of the most tear-jerking moments in the entire series. Then he and Brienne, who always brought out the best in him, became unlikely lovers. But only briefly. In the end, he wanted what he had declared to be his only need all along, the incestuous love of Cersei. The two of them were crushed under the wreckage of the Red Keep as they embraced, leaving the world touching each other, just as they had entered it.