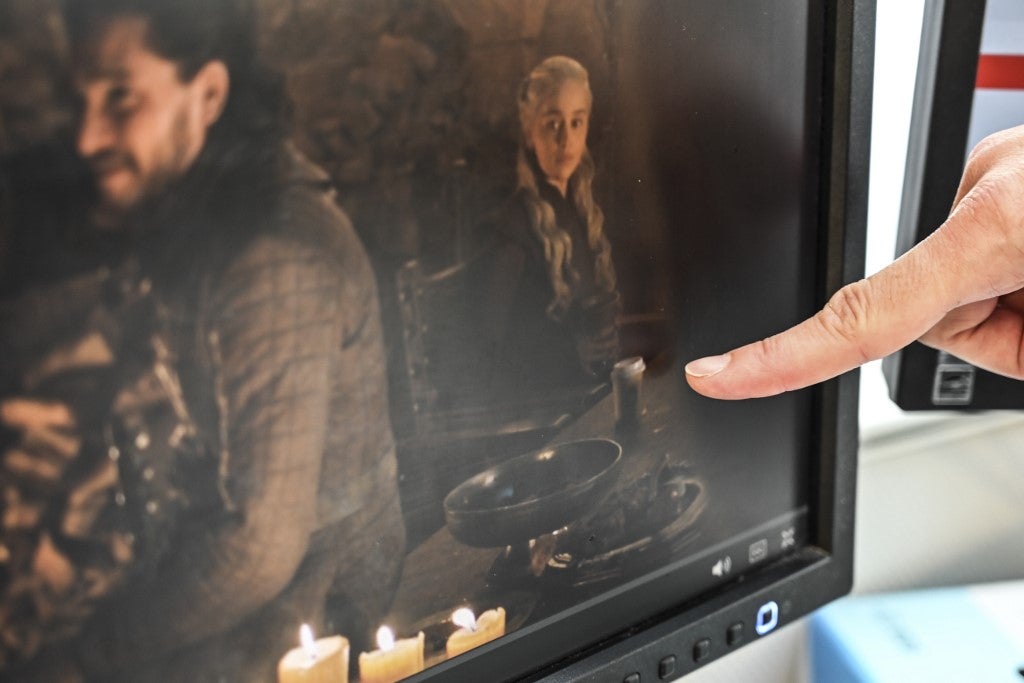 An illustration dated May 6, 2019, shows an editor in a Washington, DC, newsroom pointing at a cup sitting on a table on the set of a scene with Daenerys Targaryen (right) and John Snow during the last episode of Game of Thrones which aired the previous night. AFP

LOS ANGELES, United States – After eight epic years of chivalry, sex, death and dragons, “Game of Thrones” fans worldwide have just 79 pulsating minutes remaining Sunday to get their final fix in one of the most hotly anticipated events in TV history.

The blood-spattered tale of noble families vying for the Iron Throne has just one episode to go and buzz is at fever pitch for a ratings juggernaut that has demolished audience records like a Dothraki barbarian finishing off a skillet of horse meat.

“We want people to love it. It matters a lot to us. We’ve spent 11 years doing this,” Dan Weiss, who directed the 73rd and final episode with fellow showrunner David Benioff, told Entertainment Weekly.

While many will watch at home, perhaps with a goblet of Dornish red wine and a punnet of Braavosi cockles, thousands will celebrate and mourn the show’s denouement at viewing parties in bars, banqueting halls and backyards from Alaska to Armenia.

One of the darkest and most controversial primetime series ever made, “GoT” has been the target of criticism over the years for senseless violence and its repeated use of rape as a dramatic device.

The adult themes have not deterred fans, however, nor the industry itself, which has seen fit to make it the most decorated series in history, with 47 Emmy Awards.

Airing in 170 countries under its portentous tagline, “Winter is Coming,” the show is also the most expensive ever, with a budget of $15 million per episode in its final run.

The season seven finale set an all-time US record for premium cable TV with 16.5 million people watching live or streaming on the day of transmission and 15 million more tuning in later.

Critics said it marked a return to form, with the narrative allowing female characters to demonstrate complexity and moral agency lacking in some of the earlier seasons.

Most controversial has been the rapid descent into mass-murdering madness by Emilia Clarke’s fan favorite Daenerys Targaryen, arguably the lead character in an enormous ensemble that has called on the talents of such luminaries as Charles Dance, Sean Bean, Jim Broadbent and Diana Rigg.

“In the 11th hour, ‘Game of Thrones’ turned Dany not just into a Mad Queen, but into a crazy ex-girlfriend — the laziest of sexist tropes,” remarked Daily Beast writer Melissa Leon.

A Change.org petition called “Remake Game of Thrones Season 8 with competent writers” had comfortably passed one million signatures by the time of Sunday’s finale.

For Alyssa Rosenberg of The Washington Post, the show resonated profoundly at an “inflection point” in American culture and politics, serving up plotlines as metaphors for real life events.

“During the series’ run, Hillary Clinton suffered a shocking loss to Donald Trump in the 2016 presidential election; white nationalism surged back into public life,” she said.

The show’s terrifying supernatural White Walkers, meanwhile, were an allegorical embodiment of the “new and apocalyptic” urgency of climate change and its sexual violence serviced the debate around the #MeToo national reckoning.

To throw hackers and pirates off the scent, Benioff and Weiss shot several versions of the final episode, a tactic already used for “The Sopranos” and “Breaking Bad.”

However it ends, the divisiveness of the show has always been part of the fun, according to James Poniewozik of The New York Times.

“What made ‘Game of Thrones’ emblematic of its time is how it divided its audience from start to finish, right down to the matter of what a happy ending would even constitute,” he wrote.

“It gave its intense fandom multiple angles to debate as well as to enjoy.” /cbb

Read Next
Barbie on JM: We’re still not ok with each other
EDITORS' PICK
Water remains our saving grace right now
Enrollment drops more than 25%
Palace: Gov’t can force quarantine for mild cases
Win the Samsung Galaxy S20+ BTS Edition at the Smart K-Quiz Night on July 18
How Filipinos are embracing digital technology amid the coronavirus pandemic
DOH expands list of workers for priority testing
MOST READ
Metro Manila stays under GCQ until July 31
ABS-CBN to start retrenchment by end of August, as franchise remains elusive
Defensor dares Tañada to public debate on ABS-CBN franchise issue
BuCor officer found dead with gunshot wound to head inside NBP
Don't miss out on the latest news and information.