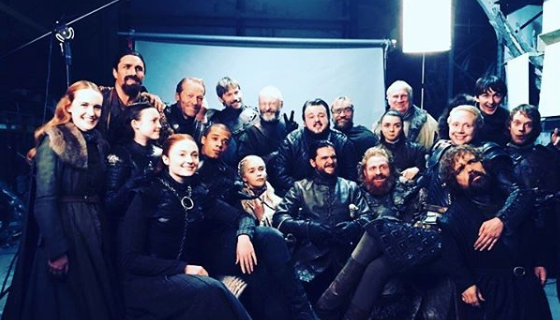 The fight for the Iron Throne has reached its epic conclusion as “Game of Thrones” arrived at its final episode today.

Widely considered as a cultural phenomenon, the medieval fantasy series enjoyed critical and worldwide success throughout its eight-year run. It has also become a stepping stone for the cast’s success in Hollywood.

Many of its stars expressed their gratitude to their characters, fans, fellow cast members and crew via social media, some even before the show aired its final episode.

Emilia Clarke, who starred as Daenerys Targaryen, posted photos of herself with her castmates, and honored memories in playing the Mother of Dragons.

Sophie Turner, who plays Sansa Stark, recalled her turn as the Lady of Winterfell, thanking the show, fans, castmates and her character.

“To the show and the incredible people who make it, thank you for giving me the best life and drama lessons I could have ever asked for,” she added.

Isaac Hempstead Wright, who played Bran Stark, posted a photo of himself in Radio City Music Hall as he said goodbye to the show.

“What a spectacular way to send off this crazy thing we’ve all been a part of for so long. Game of Thrones, over and out,” he saluted the show.

Raleigh Ritchie, who played Grey Worm, expressed his gratitude to the show, crew and his character in a series of posts via Twitter.

3/3 Grey Worm. You went from a robot to a real boy. I’m proud of you. I’ll miss you bud. Thank you to everybody that cared about him and rooted for him. He was really scared at first, but you made him feel loved. He appreciates it. I asked him.

Here’s me on my 1st and last day. pic.twitter.com/ivNUNVd1vC

“Grey Worm. You went from a robot to a real boy. I’m proud of you. I’ll miss you bud. Thank you to everybody that cared about him and rooted for him,” Ritchie said.

John Bradley, who starred as Samwell Tarly, took a trip down memory lane as he posted a throwback photo of himself holding the show’s rehearsal and prep sheet.

“Back then, we couldn’t have known the journey we’d go together. I wouldn’t swap that experience, or those people, for the world,” Bradley said. “Enjoy the episode and thanks for everything.”

Other GoT cast members shared their character photos via Instagram, saying goodbye to the show and its fans.

“Being a part of this show has given me experiences I’ll never, ever forget,” he said. “But it’s the people I’ll miss the most.”

Read Next
And the winner of the ‘Game of Thrones’ is…
EDITORS' PICK
Lawmakers eyeing more changes in Maharlika plan
Shop smarter with vivo’s big 12.12 holiday deals
How not to retire as an ex-president
The vivo Y02 is now available in the Philippines for only PHP 5,299
House energy committee chair Arroyo bats for cheap electricity
Hidilyn Diaz wins only gold missing from her collection
MOST READ
Jovit Baldivino, ‘Pilipinas Got Talent’ winner, dies at 29
LPA enters PAR, to likely strengthen into tropical depression in coming days – Pagasa
Andi Eigenmann, family in Manila for a quick visit; Ellie dines with grandma Jaclyn Jose
Lawmakers eyeing more changes in Maharlika plan
Don't miss out on the latest news and information.