TEL AVIV, Israel — The Netherlands won the 2019 Eurovision song contest early Sunday at a show in the seaside Israeli city of Tel Aviv that featured a performance from Madonna, plenty of glitz and some controversy. 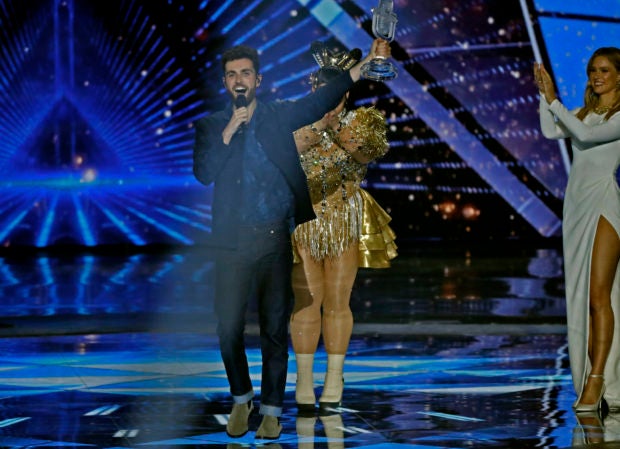 Netherlands’ Duncan Laurence celebrates after winning the 64th edition of the Eurovision Song Contest 2019 at Expo Tel Aviv on May 19, 2019, in the Israeli coastal city. Image: AFP/Jack Guez

The glamorous and famously kitschy finale gave Israel a chance to showcase its credentials as a culturally progressive nation, but politics lurked in the background as pro-Palestinian activists called for a boycott.

The extravaganza passed off largely politics-free, though two incidents temporarily drew attention away from the songs and toward Israel’s conflict with the Palestinians.

Local media showed images of two of Madonna’s dancers side-by-side with Israeli and Palestinian flags on their backs during her performance in an apparent call for unity.

The European Broadcasting Union, which organizes the event, condemned both displays.

Referring to Madonna’s dancers, it said “this element of the performance was not part of the rehearsals.”

“The Eurovision Song Contest is a non-political event and Madonna had been made aware of this.”

It was not clear whether the singer was aware of the flags during her routine.

Israel won the right to host the extravaganza thanks to last year’s victory by Israeli singer Netta Barzilai, who opened the show on Saturday night at a Tel Aviv concert hall.

At a beach across town, crowds gathered to party at a Eurovision Village set up for the event.

After performances by all 26 finalists, Duncan Laurence of the Netherlands took the prize with the stirring power ballad “Arcade”.

Laurence, 25, came out as bisexual in 2016 and has used his new high profile to call for tolerance.

Italy finished second and Russia third in the results that combined votes from juries from participating countries as well as viewers at home.

With “Arcade”, Laurence, whose real name is Duncan de Moor, sings of a romantic break-up with the refrain “loving you is a losing game.”

“I think the most important thing of course is to stick to how you are … stick to what you love, even if you have a different sexuality,” he told journalists after the show.

Dutch Prime Minister Mark Rutte said on Twitter that he had spoken to Laurence and congratulated him, calling his performance “sublime and powerful.”

Earlier in the night, Madonna stole much of the limelight with her two-song performance, including her 1989 hit “Like A Prayer”.

Quavo, part of United States hip-hop group Migos, then joined her for the reggae-inflected “Future”, off her upcoming album Madame X.

Some on social media criticized her out-of-tune singing during parts of her performance.

“Let’s never underestimate the power of music to bring people together,” Madonna said in brief, televised comments before she took the stage.

She had earlier said she was determined to perform at the finals, but her participation brought protests from the Boycott, Divestment and Sanctions (BDS) movement.

BDS has for years been pushing for investors and artists to shun Israel over its decades-long occupation of Palestinian territories, and led calls for a boycott of this year’s Eurovision.

In a statement carried by U.S. media ahead of the finals, Madonna said: “I’ll never stop playing music to suit someone’s political agenda nor will I stop speaking out against violations of human rights wherever in the world they may be.”

The largely European competition, which gifted the Swedish supergroup ABBA to the world, dates back to the 1950s.

Widening over the years to include channels subscribing to the European Broadcasting Union, and now spreading as far as Australia, the show lures in millions every year.

Laurence ended a 44-year drought for the Netherlands in the long-running spectacle.

He has said his love of music provided a refuge during a difficult upbringing as a “mini-Harry Potter lookalike.”

Israel’s hosting duties were embraced by the country and received intensive coverage and attention in recent days.

Barzilai’s victory in Portugal last year led to ecstatic scenes in Tel Aviv, with crowds breaking out in song in the city’s Rabin Square and many jumping in the fountain there.

Parties were to take place in the West Bank city of Ramallah, Haifa in northern Israel — home to a significant Arab population — and London and Dublin.

Iceland’s entry Hatari had been expected to spark controversy.