NEW YORK, United States — If anyone is kicking themselves that they missed seeing the musical “Kinky Boots”, relax — it is coming to a movie screen nearby this summer. 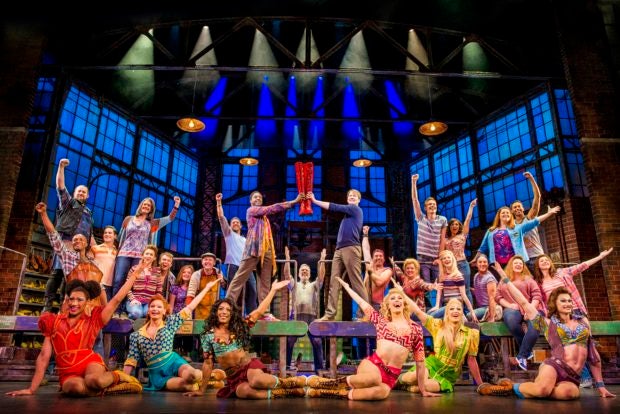 This image released by Fathom Events shows the cast during a performance of the musical “Kinky Boots”. Image: AP/Matt Crockett

Fathom Events plans to show a performance from the London cast in nearly 500 movie theaters across America on June 25 and again on June 29.

The musical is about a staid British shoe factory on the brink of ruin that retrofits itself into a maker of footwear for drag queens.

It has songs by Cyndi Lauper and a story by Harvey Fierstein.

The musical, which made its bow on Broadway in 2013, won the Tony Award that year and later a Grammy Award for best musical theater album. A London production won the Olivier Award.

Both the West End and Broadway runs are over, with the Broadway doors closing last month after more than six years and 2,500 performances.

The filmed version was recorded at the Adelphi Theatre in London. It will star Matt Henry as Lola and Killian Donnelly as Charlie.

Viewers will also enjoy “an exclusive behind-the-scenes look at the story” and “never-before-seen footage from the record-breaking Broadway run.”

Its appearance in movie theaters will mark a full-circle moment for the title.

The show is based on the film written by Geoff Deane and Tim Firth. RGA/JB

‘Kinky Boots’ encourages Chinese drag queens to ‘be themselves’

Nyoy Volante is astounding in the thrilling ‘Kinky Boots’