Cardi B tops BET noms, Nipsey Hussle up for 1 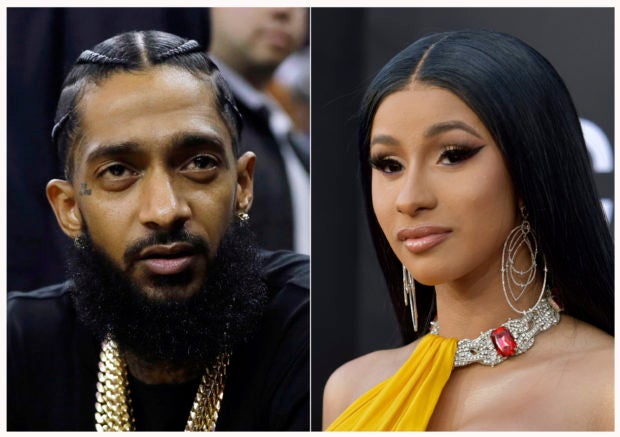 This combination of photos shows rapper Nipsey Hussle at an NBA basketball game between the Golden State Warriors and the Milwaukee Bucks in Oakland, Calif. on March 29, 2018, left, and rapper Cardi B at the Billboard Music Awards in Las Vegas on May 1, 2019. Hussle scored a posthumous nomination for the 2019 BET Awards and Cardi B is the most nominated act with seven. The BET Awards will take place June 23, 2019, in Los Angeles. Image: AP

Hip-hop star Cardi B is walking into the 2019 BET Awards as the most nominated act with seven, while late rapper Nipsey Hussle scored a posthumous nomination.

BET told the Associated Press late Thursday that Cardi B’s nominations include two for the top prize — video of the year — with her hits “Money” and “Please Me”, with Bruno Mars. She is also competing for best female hip-hop artist, the viewer’s choice award and album of the year with her Grammy-winning major-label debut, “Invasion of Privacy”.

Hussle, who was shot to death on March 31 in what police said was a personal dispute outside his South Los Angeles clothing store, picked up a best male hip-hop artist nomination. His competition includes J. Cole, Travis Scott, Meek Mill, 21 Savage and Drake, who is behind Cardi B with five nominations.

Drake’s No. 1 hit, “Nice for What”, is up for video of the year along with Childish Gambino’s “This Is America”, the Carters’ “Apes(asterisk)(asterisk)t,” 21 Savage and J. Cole’s “A Lot”, and the two Cardi B clips.

The BET Awards will take place June 23 from the Microsoft Theater in Los Angeles.

Cardi B was named best female hip-hop artist at last year’s BET Awards, and she’ll defend her title against Nicki Minaj, Remy Ma, Megan Thee Stallion, Kash Doll and Lizzo. Cardi B is a double nominee in best collaboration thanks to the hits “I Like It”, with Bad Bunny and J Balvin, and “Please Me”, with Mars.

Her competition in album of the year includes the Carters’ “Everything Is Love”, Scott’s “Astroworld”, Mill’s “Championships” and Mai’s “Ella Mai”.

The 2019 BET Awards will air live across seven Viacom networks in the United States, including BET, MTV, VH1, Logo, MTV 2, MTV Classic and BET HER. CC