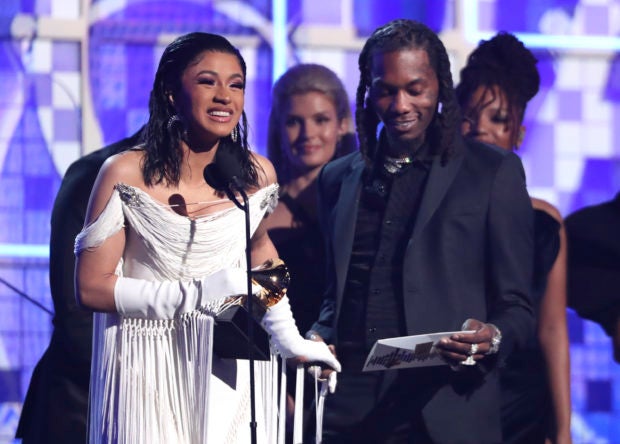 Cardi B, left, accepts the award for best rap album for “Invasion of Privacy” as Offset looks on at the 61st annual Grammy Awards on Sunday, Feb. 10, 2019, in Los Angeles. Image: Invision/Matt Sayles via AP

“Oh my goodness,” she said, struggling to gather herself. “Whoa, child.”

Cardi B is just the fifth woman ever nominated in the category, which was created in 1995.

Lauryn Hill was part of the Fugees when the group won in 1997 for “The Score.”

Cardi B took the stage at the Staples Center holding the hand of husband, Offset, with whom she has reunited after marital issues last year.

Holding the trophy in her white-gloved hands, Cardi B thanked “you husband” and the couple’s daughter, who was born seven months to the date.

“I’m sorry, I just, oh the nerves are so bad,” she said. “Maybe I need to start smoking weed.”

Cardi B told the crowd she found out she was pregnant before her album was completed. She was under pressure to finish it and do video shoots before she began showing.

Cardi B had one of the show’s memorable performances, twerking on a piano and strutting with peacock-like plumage attached to her hips while singing “Money.” Her necklace fell off mid-song but she kept on going.

She lost out on her other four nominations, including in the record and album of the year categories. CC

Winners in key categories at the 2019 Grammy Awards