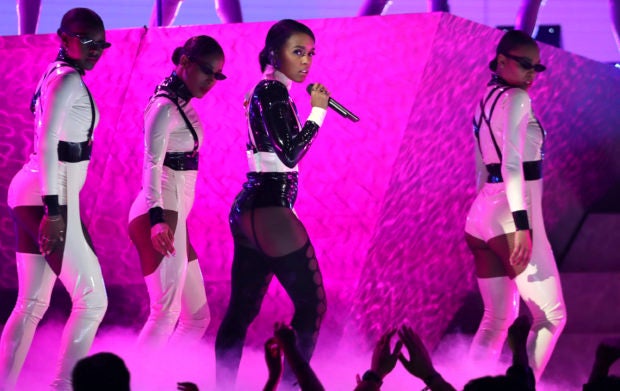 Rap artists and women have both felt shunned by the Grammy Awards in recent years. But this year, they took center stage.

Childish Gambino’s disturbing look at race relations, “This is America,” won record and song of the year on Sunday’s telecast. It was the first time a rap-based song won both of those awards, considered — with album of the year — the recording industry’s most prestigious.

Lady Gaga and Brandi Carlile won three Grammys apiece, and former First Lady Michelle Obama was a surprise guest at the top of the show on CBS.

Childish Gambino, the stage name of actor Donald Glover, and another prominent rap nominee, Kendrick Lamar, both declined invitations to perform or attend Sunday’s show. Some rap artists feel the Grammys have been slow to recognize how the genre now dominates popular music.

Ludwig Goransson, a songwriter and producer on “This is America,” said backstage that he was surprised the victories were so historic. Just listening to the radio, watching the culture and seeing how many rap songs are downloaded is evidence of rap’s impact.

“It’s about time something like this happened with the Grammys as well,” Goransson said.

Cardi B became the first solo female to win best rap album, although Lauryn Hill was the lead singer of the Fugees, which won the same award at the 1997 Grammys. Cardi B was so nervous accepting the award that she joked, “Maybe I need to start smoking weed.”

She looked anything but rattled earlier, when her rendition of “Money” was among the night’s performance highlights. Janelle Monae delivered a smoking version of her hit “Make Me Feel”; St. Vincent and Dua Lipa’s duet on “Masseduction” was steamy; H.E.R. turned heads with “Hard Place”; and Carlile sang an inspired version of her hit “The Joke.”

Being part of a big night for women was huge to her, Carlile said backstage after the show.

“I’m a kid from the ’90s and Lilith Fair, you know, and those women were just dominating those platforms,” she said. “They were dominating those arena and amphitheater stages. They were getting record deals. They were becoming record executives themselves. They completely controlled the airwaves. They were on the radio. And to watch that backslide for the last 20 years has been heartbreaking. Tonight, it gives me hope as a mother of two young daughters.”

When she accepted her best new artist award, Dua Lipa pointedly said, “I guess this year we really stepped up.”

That was a reference to outgoing Recording Academy CEO Neil Portnow, who said women needed to “step up” when he was asked about the lack of women in top categories in 2018. He later acknowledged it was a poor choice of words and delivered another mea culpa on Sunday’s show.

Yet Dua Lipa was rewarded by having her acceptance speech cut off mid-sentence. She wasn’t alone, however, as a handful of other artists were also hustled off the stage, and the show seemed disjointed at the end, rushing through its final awards. Under the circumstances, having a lengthy tribute to Portnow before he gave his own speech seemed tone-deaf.

Lipa said later she would have thanked her fans, her inspirations and team if she had more time.

When she was onstage, Lipa was one of a handful of winners who paid special tribute to fellow artists. Another was Drake, whose appearance to accept the Grammy when “God’s Plan” won best rap song was a surprise because he’s not big on award shows.

He reminded fans and fellow artists that awards are based on the subjective views of others, and aren’t contests in which there are clear winners and losers.

“You’ve already won if you have people who are singing your songs word for word, if you’re a hero in your hometown. Look, if there are people who have regular jobs who are coming out in the rain and the snow, spending their hard-earned money to buy tickets to come to your shows, you don’t need this right here. I promise you. You already won,” he said at the Staples Center in Los Angeles.

Musgrave picked up album of the year for “Golden Hour,” which is labeled country but had wider appeal.

“I never dreamed that this record would be met with such love, such warmth, such positivity,” said Musgraves, who performed a stately version of her song “Rainbow.”

Dolly Parton starred in the best of the night’s two tributes to veteran artists, performing a medley of her songs with Miley Cyrus, Katy Perry and Maren Morris. The highlight of Diana Ross’ night was the cute introduction by a grandson with a mountain of hair.

The Grammys took some online blowback by having Jennifer Lopez deliver a tribute to Motown , once the nation’s preeminent label for black artists. Despite her hustle, Lopez was outshone by show host Alicia Keys and Smokey Robinson delivering one verse of “Tracks of My Tears” a capella.

Obama appeared on the show’s opening with Keys, Gaga, Lopez and Jada Pinkett Smith to describe the role music had played in their lives — seemingly a pointed reference to last year’s controversy over women artists.

“Music has always helped me tell my story,” Obama said. “Whether we like country or rap or rock, music helps us share ourselves. It allows us to hear one another.”

Another ex-White House resident was awarded a Grammy on Sunday. Former President Jimmy Carter, who is 94, won an award for best spoken word recording.

Egypt tunes into nostalgia for golden age of Arab song

Winners in key categories at the 2019 Grammy Awards

Read Next
Winners in key categories at the 2019 Grammy Awards
EDITORS' PICK
Notice of 2020 regular meeting of stockholders June 18, 2020
SM prepares for ‘safe malling’
Leveling up your ‘lutong bahay’ with the kitchen companion you never knew you needed
NBI, Immigration to join hunt for ‘underground’ medical clinics
2 Chinese nationals arrested in raid on another unlicensed COVID-19 hospital in Pampanga
P2.2 trillion in losses: Cost of COVID-19 impact on PH economy
MOST READ
Revillame tells Roque: ABS-CBN is in my heart despite being in rival network
NCR is ready for GCQ — Palace
LOOK: Robredo, Vico Sotto, check Community Mart ops in Pasig
Año: Quarantine passes not needed in GCQ, movement restricted to essential travel
Don't miss out on the latest news and information.