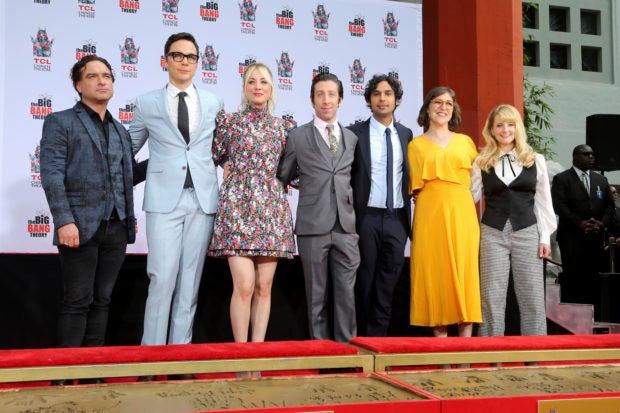 LOS ANGELES — In 2006, television critics swooned over “30 Rock”, part of a new breed of comedy that dared to fly without a laugh track and whose ranks included “Arrested Development”, ”The Office” and “Everybody Hates Chris”.

Then a misfit nerd crashed the party. “The Big Bang Theory” was crafted in the style of 1950s groundbreaker “I Love Lucy”, with the requisite studio-audience tapings and recorded guffaws intact. Even some of those making the CBS comedy that debuted in 2007 questioned its chances, said Jim Parsons, who stars as Sheldon Cooper, one of the show’s brilliant and socially inept scientists.

“‘[We are] making the last great buggy wagon in the age of the Model T, but the Model T is here. So how long does this go?'” was how one writer framed the contrast between old-school and 21st-century TV comedies, Parsons recalled in a recent interview.

As the enduringly popular series prepares to bow out Thursday, May 16, with an hour-long finale, the question is raised anew: Will viewers, awash in such creatively bold and sophisticated players as “Atlanta” and “Veep”, accept another traditional sitcom? Discounting the resurrection of “Will & Grace” and “Roseanne”-turned “The Connors”, can the old-school formula score the new hits it needs to survive?

Who better to ask than Chuck Lorre, who created “The Big Bang Theory” with Bill Prady and whose mastery of the genre has produced winners including “Two and a Half Men” and “Mom”, but also makes Netflix’s contemporary-style “The Kominsky Method”.

The Hollywood veteran hedges his reply — “[I have] been around long enough to know that a prognosis is a really wonderful way to carve into stone how stupid you are. Or arrogant,” — then admits to faith in the format known as a “multi-cam,” for the multiple cameras used in tapings.

“I still believe that shooting a show in front of an audience is a wonderful way to tell a story,” Lorre said. “I [do not] think the audience watches [‘The Big Bang Theory’] and counts cameras. They watch the show because they love the characters and it delivers on the comedy.”

There is support for Lorre’s optimism, said Robert Thompson, a Syracuse University professor of TV and popular culture.

“Many people talk about the studio audience sitcom being something right out of Colonial Williamsburg, as way past its prime,” Thompson said. “Whenever anybody would make that argument, the first thing I would say is ‘The Big Bang Theory’ has been sitting at top or near the top of the ratings,” even against the strengthening headwinds of streaming platforms including YouTube and Netflix.

The series’ third-to-last episode on May 5 was the most-watched program on broadcast or cable TV with 12.5 million viewers, pushing aside HBO’s behemoth “Game of Thrones”, which wraps its eight-season run May 19.

There is also the sheer weight of history on the multi-cam’s side. It has descended from radio comedies and their roster of stars, including the Nelson family in “The Adventures of Ozzie and Harriet” and Ethel Waters in “Beulah”, who were among the first to add pictures to their punchlines — although it took Desi Arnaz, the “I Love Lucy” producer who starred opposite wife Lucille Ball, to popularize filming sitcoms with three (now four) cameras, in part for efficiency.

Look further back to see the art form the sitcom represents, said Prady.

“[It is] going to a play,” he said. And while viewers embrace a show like Donald Glover’s “Atlanta”, he said they may also choose TV’s version of a stage production.

Competition from streaming platforms, along with established basic and premium cable players such as FX, HBO and Showtime, will continue eroding the broadcast networks’ audience, outside of live draws like sports, and thus sitcoms’ share of the pie.

When “Cheers” left the TV stage in 1993 after an 11-year run, it drew more than 80 million viewers, a number “Big Bang Theory” cannot hope to touch and which now belongs only to the Super Bowl. 10 years before that, an astounding 100 million-plus viewers tuned it to the two-hour “M-A-S-H” finale.

Sitcoms airing on the major broadcast network — ABC, CBS, NBC and Fox — also are increasingly elbowed out of the industry’s highest-profile awards, the Emmys. While single-camera “Modern Family” had a lock on the best comedy series trophy for five years, from 2010 to 2014, the last multi-cam series to claim the award was “Everybody Loves Raymond” in 2005.

True enough, said Syracuse’s Thompson. But he recalls dire predictions of the genre’s death in the 1980s, until “The Cosby Show” single-handedly provided the coattails needed to revive the format. And the popularity of multi-cams remains strong enough to create a financial bonanza from reruns, with shows as unalike as “The Golden Girls” and “Seinfeld” still popular well after their 20th-century heydays.

“[There is] a lot of people out there who would like to do be the person who creates the next ‘Big Bang Theory’ and, someone’s going to do it,” he said.

It might even be Lorre himself, who produced a four-camera pilot for CBS, one of more than a dozen multi-cams vying this week for a broadcast home in 2019 to 2020, against a roughly equal number of one-camera competitors.

“If you have something worthwhile, I [do not] think it matters whether [it is] single-camera, four-camera, 18 cameras or if [it is] a flip book,” Lorre said. “If [it is] really good, [it is] going to find an audience. Maybe [that is] naive or overly optimistic. But I have to proceed on that basis.” CE/JB