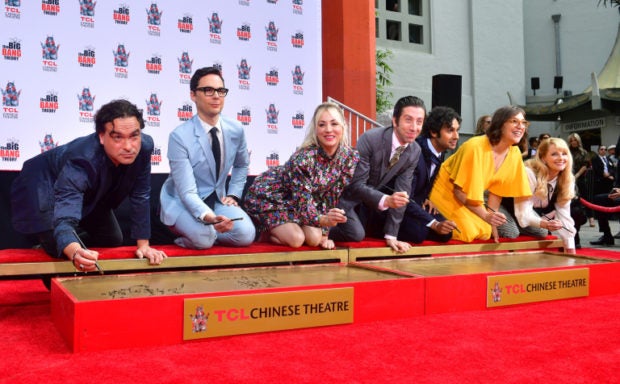 As their beloved comedy nears its end, the cast of the “The Big Bang Theory” has left its mark on Hollywood history. Image: AFP/Frederic J. Brown

As their beloved comedy nears its end, the cast of the “The Big Bang Theory” has left its mark on Hollywood history — literally, as the seven actors immortalized their handprints in cement at the famous TCL Chinese Theatre in Los Angeles Wednesday, May 1.

Following the daily lives a group of geeky-but-loveable California scientists and their girlfriends, “The Big Bang Theory”, which premiered in 2007, has for years been the most-watched comedy on United States television.

Kunal Nayyar (Raj Koothrappali, who is cripplingly shy talking to women), Mayim Bialik (Amy Farrah Fowler, a neurobiologist whose relationship with Sheldon is dictated by a contractual agreement) and Melissa Rauch (the small-but-mighty Bernadette) also took part in the ceremony.

Galecki said taking part in the quintessential Hollywood event was an “epic honor.”

“It’s been an incredible ride,” he said. “Thank you all. Thank you to the fans. There is a little part of all of you in these handprints.”

The Emmy-winning CBS show’s twelfth season is set to finish with its 279th episode, a one-hour finale, on May 16.

Parsons said the episode was filmed on Tuesday, April 30, the night before their handprint ceremony.

“We did tape our last episode last night,” he said, “and yet I can live under the delusion that we’re still working together, so this is a real blessing.”

“And I want to thank the other six cast members who are with me here today, this experience would not have happened at all with any other combination,” he said.

Parsons’s Sheldon is the emotional heart of the show, despite his often-clueless social interactions and his tendency to focus on his physics research over his friends (and his “Bazinga” catchphrase, which drives the gang crazy). The character was so popular that CBS launched the spinoff show “Young Sheldon” in 2017.

Winner of 10 Emmy Awards, “The Big Bang Theory” attracted more than 20 million viewers per episode for parts of its ninth season.

“It reaches so many different people, because it is simply hilarious and these characters are just so lovable,” said Cuoco. “It’s completely worldwide.” CE/JB