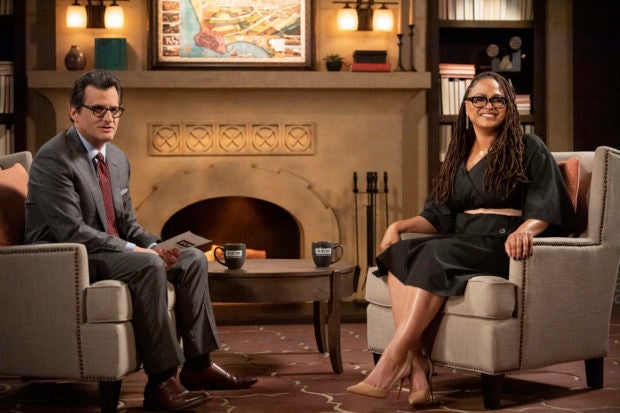 To say filmmaker Ava DuVernay is a busy woman is an understatement, but when Turner Classic Movies called and asked her to curate the channel’s “The Essentials” series, she knew she had to make it work.

Usually “The Essentials” is filmed across two or three days. But the only way it would fit in with DuVernay’s schedule — which included editing her “Central Park Five” Netflix miniseries and prepping the DC film “New Gods”, among other projects — was if she and TCM host Ben Mankiewicz ruminated about 17 films in one marathon day.

The new season, which launches Saturday, May 4, will include widely known films like “West Side Story”, ”Dog Day Afternoon” and “Gandhi” as well as films that may not be as familiar, like “Losing Ground”. The Associated Press got a front-row seat to the conversations between DuVernay and TCM host Ben Mankiewicz at the taping last month in Los Angeles.

It was a film lover’s dream tuning into the in-depth dialogues between the two cinema fiends. Their talking continued even after the cameras stopped rolling, from the pronunciation of actor John Cazale’s name to Queen Latifah’s attempt to make a film about singer Ethel Waters and whether or not it was appropriate to discuss Lena Horne’s personal affairs. The two didn’t shy away from talking about films that may be problematic now but were important at the time either, like Vincente Minnelli’s “Cabin in the Sky”, which was the first musical to feature a cast of all African Americans.

There’s no denying it was a long day, with a wardrobe change and everything, but it was worth it for both.

“It’s like we’re going on a second date,” DuVernay said as she walked onto the iconic living room set — where the fire is fake but the books are real — in her second outfit of the day. “I’ve changed my clothes. You have, too.”

“And I didn’t even wait three days to call you,” Mankiewicz said.

Some of the films Mankiewicz had never seen before DuVernay put them on her list, like Haile Gerima’s “Ashes and Embers”, about a Vietnam veteran returning home, and Kathleen Collins’ semiautobiographical “Losing Ground”, both from 1982. Others he had seen before, but said he appreciates in a different way after his talks with DuVernay, like “Dog Day Afternoon”, ”Harlan County U.S.A.” and “The Battle of Algiers”, which he now counts among his top 10 or 15 favorite films.

Indeed, part of the reason for having a filmmaker like DuVernay collaborate for the series is because of the unique perspective she’d bring as a black woman filmmaker. And she did not disappoint.

DuVernay programmed documentaries, first features and important films by black filmmakers like Julie Dash, who directed and produced the groundbreaking film “Daughters of the Dust”. She also included works from female directors like the late Agnes Varda’s first film “La Point Courte” and Chantal Akerman’s “The Meetings of Anna”; international films that had a profound effect on her, like Satyajit Ray’s debut “Pather Panchali”; and important landmarks in representation, like “Sounder” and “Claudine”.

“People who love movies benefit from thinking globally about film — globally literally and globally figuratively,” Mankiewicz said. “In America, we had a class system that kept more than half the people out of being the leading voice in making this art form, and Ava is proving to be a conduit for helping us unlock that.”

In fact, in making her selections, DuVernay chose a number of films that weren’t in the TCM library at all, including both “Losing Ground” and “Ashes and Embers”.

DuVernay said there wasn’t a deep bench of black filmmakers in the catalog, but that TCM was “really responsive in going out and getting those licenses” in order to air the films for a wide audience.

DuVernay still recalls the first movie that inspired her to her eventual path in filmmaking — “West Side Story.” It was her aunt that introduced it to her, and she can barely contain her infectious giddiness while discussing.

“It was such a seminal moment for me,” DuVernay said.

She’s hoping the films that she chose for “The Essentials” might have that same effect on someone else.

“To think that you could, hopefully, attract new audiences to TCM to watch some of this and to think that it could change people in the way it changed me was really exciting,” she said.

DuVernay is looking forward to audiences discovering 1982’s “Losing Ground” and Kathleen Collins in particular, who she considers on par with any of the white male contemporaries of the time, like, “a Woody Allen, per se.” The film was never released beyond screenings at film festivals and Collins died in 1988 at the young age of 46.

“It was just a slice of life from her perspective and yet because she was a woman and because she was black it went nowhere,” DuVernay said. “And now that film has been forgotten by so many — not even forgotten, it’s never been known.”

She continued, “That’s one that especially as a black woman filmmaker, I feel so connected to wanting to make sure people know her, know that she existed, know what she said and what she put out in the world and to really appreciate that she just was.”

And Mankiewicz was more than happy to sit and listen and learn.

“She was very eager to talk about these movies which were very important to her,” he said. “But the real beneficiaries are TCM fans. We win in this deal.” CC