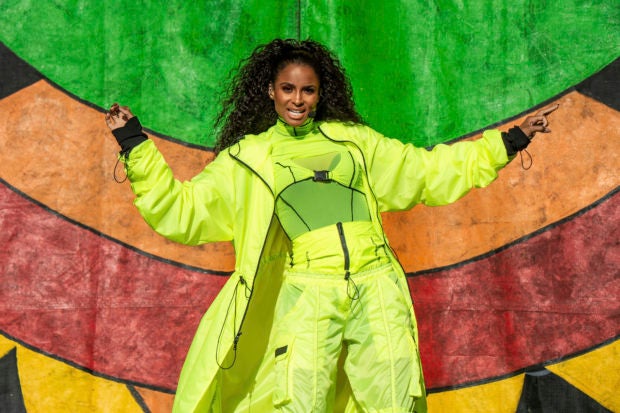 Rain delayed the start of the 50th New Orleans Jazz and Heritage Festival on Thursday but didn’t seem to dampen spirits.

Zack Buda, 25, of Manhattan, was among people dancing in a huge, grassy puddle off to the side of the main stage where Earth, Wind and Fire were closing the first day. He’d come to New Orleans with his parents, Scott and Hillary Buda, and their friends, Amy and Jamie Bernstein of Brooklyn.

“They’re exposing me to the music of their time,” said Buda, who occasionally used binoculars for a better view of the stage where the group was performing “Sing a Message to You”.

Amy Bernstein said she and her husband were exposing their friends, whose daughter is a freshman at Tulane University, to music festivals. “We’ve been to 15 Newport Folk Festivals… They’ve never been to a festival ever.” This was her first Jazz Fest, she said.

Earlier in the day, Lisa Wurtzel of New Orleans two-stepped with her husband, David Wurtzel, to the Cajun beat of Toujours Balfa. Both wore rubber boots; Lisa Wurtzel said they had more rain gear in case of more rain — and there were indeed more downpours.

There were still more than 60 acts and interviews at 13 stages and tents — 10 for music plus an interview stage, a kids’ tent and a cultural exchange pavilion. The pavilion usually focuses on a single country but this year features more than 150 performers from 13 countries over the two weekends of Jazz Fest.

People in slickers, transparent ponchos and trash bags turned to impromptu ponchos continued to stream into the infield and the soggy sand of the racetrack. One pair in black rain jackets added kitchen-sized trash bags as galoshes.

Bob Warren and Neal Adler were at the festival to work at a beer tent but took advantage of the delay to get some lunch before fans were admitted.

“It’s weird to be here with no music playing,” Warren said.

He was eating boudin balls — fried rice and sausage — and Adler had a barbecued brisket sandwich. They also tried one of the year’s new items — oyster Rockefeller bisque. The cream soup with oysters and spinach was “quite exceptionally good,” Warren said.

Food sales continued even during the rain, though dark plastic liners were pulled down to about 18 inches (less than half a meter) from the counters and lines of customers were far shorter than usual.

Music tents were packed with both fans of a genre — blues, jazz, gospel — and people taking shelter.

Melinda Solomon chatted with fellow University of Mississippi Medical Center student Ashli Fitzpatrick during a session in the jazz tent by percussionist Jason Marsalis, his combo and his father, pianist Ellis Marsalis.

“We were eating at one of the booths and ran over here” when a downpour started, Solomon said.

She said they’d come to hear Canadian singer-songwriter Alanis Morissette, scheduled hours later to close out one of the two biggest stages.

Amy Bernstein said she and her friends had sheltered in the Gospel Tent after walking to the Fair Grounds through torrential rain. “We listened to two groups,” she said. “It was wonderful, and so inspiring.”

Rain also filled trash cans. When one three-person cleanup crew tried to dump out water before pulling a garbage bag from its barrel, a minor flood of used plates, napkins, forks and cups washed across the concrete. The debris included what was left of a small pink folding umbrella, which became an emergency broom to sweep the trash together.

Gary Kohlman, an attorney from Washington, said the rain made him unusually stationary, moving between the jazz tent and the nearby blues tent. “Normally, I would go from music to music every 15 minutes,” he said.

He’s been coming annually for 30 years and proposed to his wife, Lesley Zork, at a Jazz Fest 26 years ago.

“The first time she said no,” he said. “Two days later, she said yes.”

By the time the next-to-last groups were performing, the sun was out. Some umbrellas still were up — first for shade, then to boogie with. CC

New York gets most mentions in love songs; Drake name-drops places the most