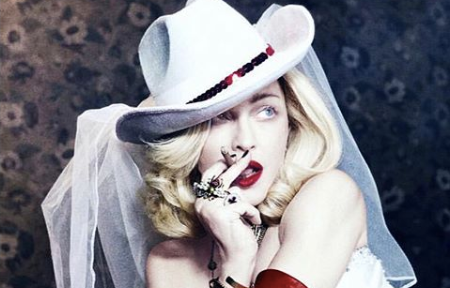 Madonna’s new album “Madame X” will be out on June 14. Image: Instagram/@madonna

The midtempo track, which the official description said “captures the spirit of Maluma’s hometown” of Medellín, Colombia, features the two musicians singing in Spanish and English.

“‘Madame X is a secret agent,” the music icon says in the video. “Traveling around the world. Changing identities. Fighting for freedom. Bringing light to dark places. She is a dancer. A professor. A head of state. A housekeeper. An equestrian. A prisoner. A student. A mother. A child. A teacher. A nun. A singer. A saint. A whore. The spy in the house of love. I’m Madame X.”

This will mark Madonna’s first new album since 2015’s “Rebel Heart”. The 13-song record will feature Madonna singing in Portuguese, Spanish and English. It will also include collaborations with Migos’s Quavo, Rae Sremmurd’s Swae Lee and Anitta, as well as a second track with Maluma titled “B*tch I’m Loca”.

“Madame X” is out June 14, and is available to preorder now, with preorders receiving an instant download of “Medellín”.

See the full tracklist below:

Madonna’s next album coming in 2019