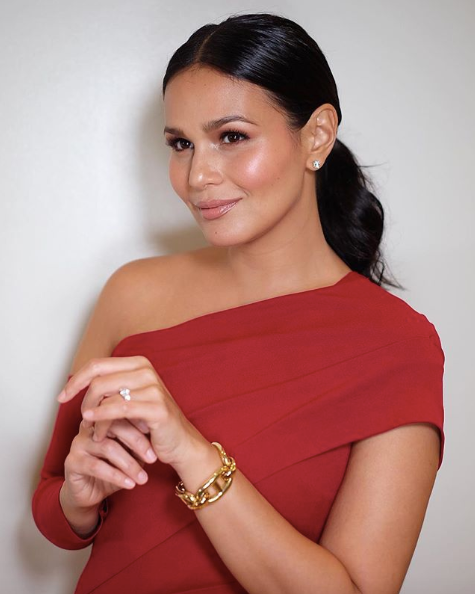 Iza Calzado thinks it is best for Darna to have a costume change.

The actress questioned why the iconic Filipino superheroine should wear a bikini in an interview with ANC’s “Headstart” aired Friday.

Host Karen Davila first expressed how hard it was to find the perfect actress to play the superheroine. Calzado then interjected: “So hard kasi naka-bikini siya (It’s so hard because she wears a bikini).”

“Palitan na kasi yung costume (The costume should change),” Calzado continued. She pointed out that unlike Darna, other superheroines such as Wonder Woman and Captain Marvel wear a one-piece and full suit, respectively.

Calzado also said that if Darna’s costume will have a redo, she thinks that it can “possibly widen, broaden” the choices who can play the superheroine.

“Not everyone will be comfortable,” she said about Darna’s current outfit. “It’s also hard to hit that perfect Darna body that they want, ‘di ba (right)?”

“In my opinion… it’s hard to fight justice in a bikini, because there’s a lot of injustice that could happen,” she jokingly added.

ABS-CBN and its movie arm, Star Cinema, are currently in the process of finding the actress who can portray Darna on the big screen. This comes after Liza Soberano had to withdraw from the project due to medical reasons.

In a “The Bottomline with Boy Abunda” interview in 2014, Calzado revealed that she was tapped to play the role for GMA’s series adaptation in 2005, which was later portrayed by Angel Locsin.

While she did not get the role, Calzado became one of the four Sang’gres in another GMA fantaserye, “Encantadia.”

She is currently the star of the iFlix film “Mystified,” which reunites her with fellow Sang’gres Karylle, Sunshine Dizon and Diana Zubiri.  /ra

Read Next
Wendy Williams files for divorce after 21-year marriage
EDITORS' PICK
DOH: Too early to say COVID-19 cases are declining
Over 3 Million worth of prizes to be won at Smart Padala’s SENDali Manalo Promo!
Gov’t rolls out COVID-19 vaccination in select pharmacies on Jan. 20 to 21
COVID-19 cases in City of Manila are decreasing, says OCTA
The best of bayside and city living at SMDC’s Sail Residences
Acer starts the year off strong with the Aspire Vero National Geographic Edition
MOST READ
Comelec junks petition to scrap Bongbong Marcos COC
Marcos Jr. visits Cebu, stands as ‘ninong’ to mayor’s son
In Batanes, octogenarian dies of COVID-19
Duterte praises military but slams police for poor discipline, corruption
Follow @KHallareINQ on Twitter
Don't miss out on the latest news and information.