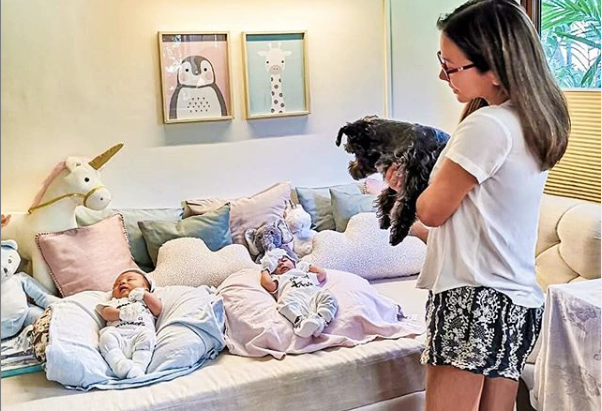 New mom Korina Sanchez still finds time to show love to her dogs despite being a busy mother to newborn twins, Pepe and Pilar.

The TV show host, who had recently flown back home from the United States, took to Instagram Tuesday, April 9 to share a morning update on her new routine with her twins and her beloved dog, Kolette.

In the video, Sanchez explained that she was still jet-lagged from her flight and that she had been sleeping at 9 p.m. The hands-on mom had also been waking up to check on her babies at 2 a.m. and 5:30 a.m — but she is not alone when she does so.

“So I checked on the kids already, but I wanted you to know that there is someone who will always be one of my loves kahit na may anak na ako (even though I already have children), and that is Kolette!” she exclaimed.

Waking up in the morning with…?😆💚

True enough, the “Rated K” host had posted succeeding photos of the schnauzer with Pepe and Pilar, as she continued to share her experiences as a mother.

In a photo with one of the twins yawning, Kolette can also be seen lying on the same bed.

Kolette also celebrated Pilar’s milestone of being able to follow the motion of a cloth with her eyes. In the photo, Korina can be seen holding a cloth over the infant while she carried her pet.

Korina’s other dog, chocolate Labrador Goya, was also present in another one of the twins’ milestones as the excited mother can be seen holding a stuffed unicorn over them.

The twins’ first meeting with Kolette was also captured last week, with the new mom saying, “So I officially introduced Kolette to Pepe and Pilar last night. Had to hold her at a distance muna (first). As we expected, Kolette was curious, then protective and even maternal.”

Kolette and the Kids So I officially introduced Kolette to Pepe and Pilar last night. Had to hold her at a distance muna. As we expected, Kolette was curious, then protective and even maternal. She was this way with the puppies of our lab Goya when she gave birth. Guardian and protector. She still is the main ally of Cocoa, daughter of Goya, pag inaaway ni Chelsea.😆🐶💚🍼

Meanwhile, some netizens were not happy about the proximity of the dogs to the infants, concerned over the fact that the dogs’ fur may trigger asthma. However, some Instagram users have pointed out that schnauzers are hypoallergenic. As of this writing, Sanchez has not yet addressed this concern. NVG

Korina Sanchez, Mar Roxas fly back to PH with their twins

Is Korina Sanchez clapping back at Jay Sonza for questioning her motherhood?

Father and son doctors who treated patients die from COVID-19