For one month only, the original Lehman Brothers have returned to New York City, and they have lots to say about the virtues and vices of American capitalism. 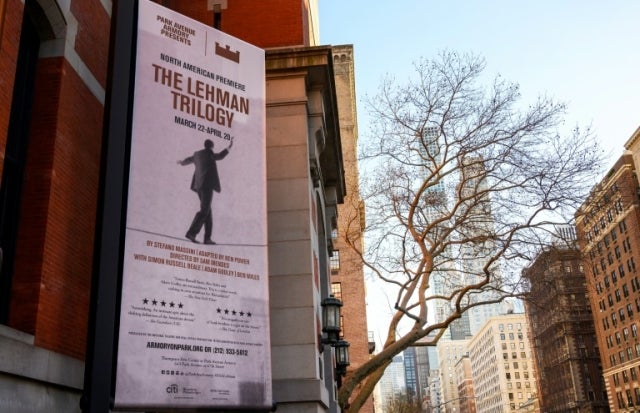 Henry, Emanuel and Mayer Lehman are at the center of “The Lehman Trilogy,” a play that chronicles how a trio of Jewish immigrant brothers from Germany and their sons grew Lehman Brothers from a tiny cotton broker in Alabama into global financial juggernaut.

The firm survived the Civil War, the 1929 stock market crash and other crises before imploding spectacularly in 2008 to spark the global financial crisis.

The play, which debuted in Paris in 2013 and has played in various incarnations throughout Europe, made its U.S. premiere this week at the Park Avenue Armory in a production originally presented at the National Theatre in London.

The venue is only blocks away from where Mayer and Emanuel lived and walkable from the firm’s midtown headquarters when it went under.

The Oscar- and Tony-winning director Sam Mendes, who was living in New York in 2008, made tweaks in light of the audience.

“In London, it felt slightly broader and more comic and here it is still full of mischief and wit,” Mendes said in a panel discussion at the Armory.

“But it feels we’re closer to the bone here, and that means you have to take it a little bit more seriously and you need to be careful how you articulate things.”

In a twist, the English-language adaptation features just three actors who take on the personas of the brothers and also play their sons, clients, rivals and wives in the more than three-hour show.

The brothers did business by the handshake and were driven by an abstract hope to make a better life, rather than “rows and rows of zeroes,” as Emanuel’s son, Philip Lehman, says at one point.

The continual presence of Henry, Emanuel and Mayer “holds 1844 all the time… even as the story moves through to 2008,” said Ben Power, who adapted the script from a 400-page text by Italian playwright and author Stefano Massini.

Versions of the play have run as long as 10 hours with much bigger casts, said Power, who sees a logic in the interest among Europeans in Lehman.

“It’s a story about European immigrants coming to this country and building something,” Power said. “Sometimes it takes an outsider to show you yourself.”

The Lehman saga begins with the arrival in New York in 1844 of the eldest brother Hayum Lehmann, whose name is quickly changed to Henry Lehman before he moves to Montgomery Alabama and opens a general store.

Following the arrival of the younger brothers, they establish “Lehman Brothers” in 1850, which evolves into a cotton broker, a business that grows dramatically after Emanuel relocates to New York and markets the commodity to clothing manufacturers.

The firm moves into other commodities and then goes on to finance the national railroad system and the Panama Canal. Its funds also help propel new industries, including air travel, department stores and entertainment, financing the studio that made “King Kong” and “Gone with the Wind.”

Throughout, the Lehman men demonstrate a knack for sussing out an unfilled or unarticulated need that they quickly meet in ways that both anticipate and create the future.

Their efforts help make the United States a superpower, but as the sons of the founders emerge — American-born men with more distance from the family’s old-world graciousness and religious faith — they push the business in new and riskier directions.

“We are merchants of money,” Philip Lehman tells his father and uncle Mayer as he is seizing control of the company. “We use money to make more money.”

Reckless speculation creates a bubble that ends with the 1929 crash — an event that portends 2008 and which is marked in the play with the chilling accounts of young stockbrokers who jumped off buildings or shot themselves in the head.

In another fateful moment, Philip’s son Bobbie, the last family member to lead the bank, hires Lewis Glucksman in 1965 to establish a trading division that is housed separately from Lehman’s headquarters.

“I do the dirty work down in the gutter,” Glucksman tells Bobbie Lehman. “A trading division will make you millions in a day, but you won’t be able to show it off in your living room.”

Bobbie later visits Glucksman’s operation with Paul Mazur, an elderly Lehman partner who serves as a kind of stand-in for the original brothers and is horrified and terrified by what he sees.

“The play tries to chart the way that human beings lose control of the things they create,” Power said.

“There was a nobility at the beginning. These structures were created in part to make money, but in part to do good,” Power said. “It went disastrously wrong and we’re still living with the consequences.” NVG

A look back at ‘Lehman Weekend,’ biggest bankruptcy in US history