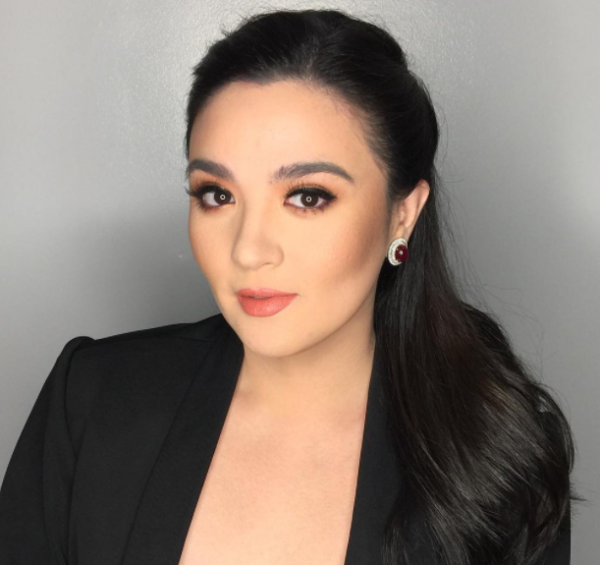 Agullo appeared on “Raffy Tulfo in Action” on March 18 where she shared that Tan had reported her to the police after she failed to return to the family following her day off on March 2. She was supposed to return either on the evening of March 3 or early morning of March 4, but could not as she claimed that she caught the flu. She also failed to answer Tan’s calls because her phone, she said, was in her bag.

When she returned to Dizon and Tan on Tuesday, March 5, she said that Tan did not face her. “Hindi po kami hinarap. Gusto ko lang po ma-settle yung problema (He did not face us. I just wanted to settle the problem).” Tan, she also claimed, did not want to give her things back.

Tan, in his defense, said that he did not withhold Agullo’s things.

(I did not withhold her things. The barangay called me the other day, I told them she will pay her debt and then I will turn everything over to the barangay so they would have proper documentation).

Agullo further said that she and Tan reached an agreement that she would pay her debt of P3,300, but only if she signed a certain document.

“Ang gusto niya pirmahan ko po ito, hindi naman po totoong ibinayad niya ako sa SSS tsaka sa PhilHealth (He wanted me to sign this. It is not true that he paid for my SSS and PhilHealth).”

As per Agullo, Tan did not pay for her Social Security System (SSS) and Philippine Health Insurance Corporation (PhilHealth) contributions. She also said she was the one who fixed her papers and not Tan.

“Tinanong ko siya kung anong gusto niya, parang personal, para mas mataas yang coverage ng hulog (I asked her what she wanted, like a personal one, so she can get higher coverage in the contributions),” explained Tan.

Moreover, Agullo said Tan did not bring her to the hospital when she got urinary tract infection and had to borrow P1,000 from another househelper so she could go to the doctor and buy medicine.

(I got UTI while I was with them, there was blood in my urine. Sir, I asked permission from you, but you did not give me anything, not even a peso).

(Did you say anything? You did not tell me anything. You know I’m not stingy when it comes to money… Sir, I didn’t know, had I known, I would not have thought twice to give her money for medicine…)

Meanwhile Dizon, who could not be reached via phone call by Tulfo, took to social media to explain what happened with Agullo’s SSS contribution. This was after some netizens called her out on her Instagram post to treat their housemaid with respect and pay for their benefits.

Dizon replied to the netizen, saying the matter is already being settled. She also admitted their fault since they thought their conversation with Agullo was clear; their agreement was they would pay her back her SSS contributions quarterly.

So many first’s today all thanks to our Nanang @missizacalzado ❤️ Their very first Art Fair and yummy Indian Cuisine for dinner. Thank you Nanang for letting us hang out with you and Tito @benmwintle ☺️

(Our mistake was we hoped our conversation with her was clear, that we would pay back quarterly the SSS we should have fixed ourselves. We wanted her to file as an individual so she would get bigger benefits). 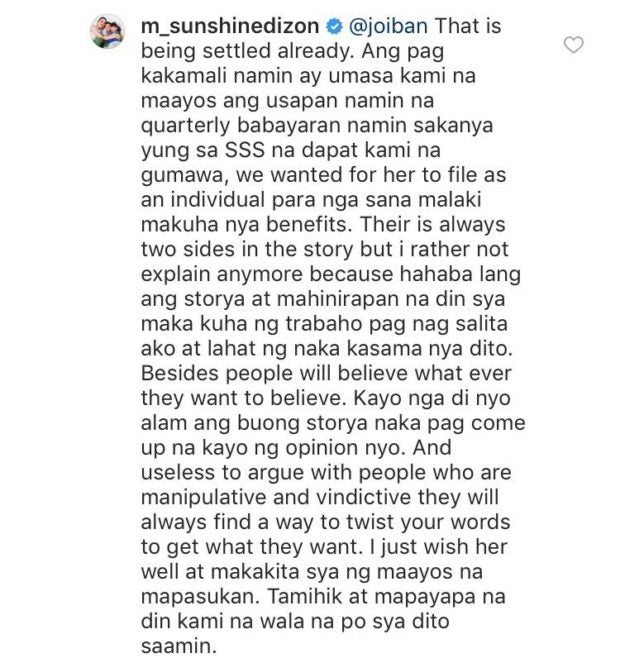 Dizon added there are always two sides to a story, but did not want to explain further since Agullo might have a hard time looking for a job if she spoke.

“Besides, people will believe whatever they want to believe,” she said. “Kayo nga di niyo alam ang buong istorya nakapag come up na kayo ng opinion niyo (You guys don’t even know the whole story yet you have already come up with your own opinions).”  /ra

LOOK: Iza Calzado, ‘bridal army’ jet off to Bali for one last bash