LOOK: Iza Calzado, ‘bridal army’ jet off to Bali for one last bash 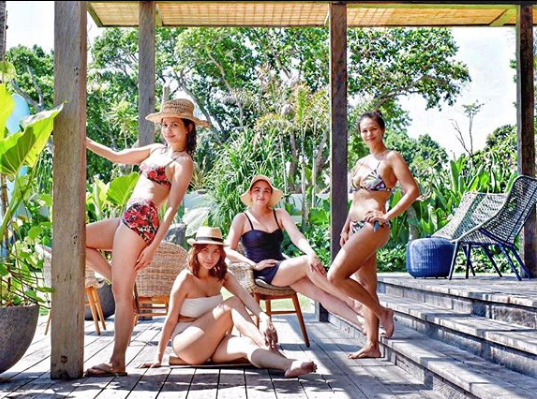 Actress Iza Calzado and her friends recently jetted off to Bali, Indonesia, for one last bash before her wedding to British-Filipino businessman Ben Wintle this December.

Calzado took to Instagram on Oct. 31 to share to her fans a picture of her with fellow “Encantadia” sang’res singer-actress Karylle Padilla and Sunshine Dizon, as well as host-model Divine Lee. The four can be seen striking a pose in their bikinis at Noku Beach House.

“The adventure is off to a good start!” Calzado quipped.

Padilla, on her end, shared a snap of the four of them boarding their flight at the Ninoy Aquino International Airport’s Terminal 3. The four posed while in the jet bridge, wearing comfortable, casual clothes for the flight.

“Our gurl @missizacalzado is soon to be Mrs. Wintle so we’re gonna make sure she has a big bash before the big day!” Padilla told her fans. “She is the girl everybody loves everywhere we go… I love you my izadooooory fish fajiza calza-i-dooooooio!!”

Our gurl @missizacalzado is soon to be Mrs. Wintle so we're gonna make sure she has a big bash before the big day! She is the girl everybody loves everywhere we go…i love you my izadooooory fish fajiza calza-i-dooooooio!! Salamat/Suksma #AirAsiaInBali ✈ #ChasingWonders for our wonderful bride-to-be #izawannadancewithsomebali

Lee, on the other hand, doesn’t know how she ended up in the presence of goddesses as she shared on her Instagram their group bikini shot.

In another photo made on the same day, Lee shared a picture of Calzado’s entire “bridal army.”

“BTS of Iza’s bridal army!” she said. “Can’t wait for the photos to come out.”

The photo showed Calzado’s “army” smiling for the camera as they posed on a wooden staircase against a foliage.

Calzado and Wintle have been mum about the exact date and location of their wedding, only revealing that it would be in December. Calzado, however, shared it would be an intimate beach wedding. As for her wedding gown, it will be created by well-known Filipino fashion designer Rajo Laurel.

Calzado and Wintle were together for six years before getting engaged in October 2017 in Sonya’s Garden, Tagaytay, in the presence of loved ones.  /ra

Iza Calzado in the thick of wedding preparations