WATCH: Iza Calzado gets engaged to boyfriend Ben Wintle in front of loved ones | Inquirer Entertainment

WATCH: Iza Calzado gets engaged to boyfriend Ben Wintle in front of loved ones 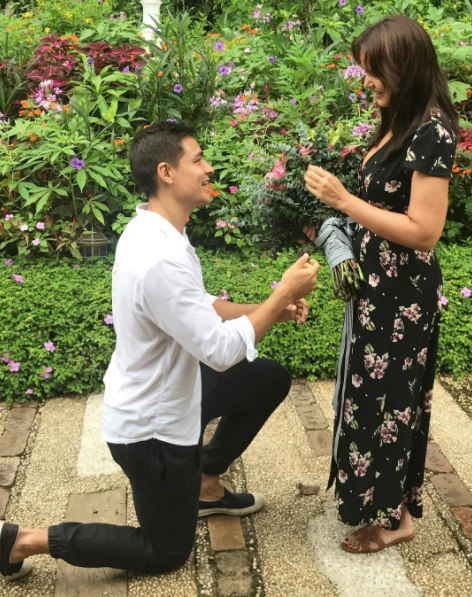 Ben Wintle went down on one knee to Iza Calzado’s surprise, in front of family and close friends.

AND THE GREATEST OF ALL … IS LOVE. #IBIza #IzaBenWintle

A video from designer Rajo Laurel shows Calzado caught off-guard and nervous after realizing the gathering was a proposal, and then wiping away tears as the British entrepreneur told her why he wanted to marry her.

“Gusto kong ikaw lamang ang makasama kong kumain at sumayaw habang buhay (I want to eat and dance with only you forever),” he said.

After she said yes, Calzado quickly put her foot down on one thing: “Wait I have a condition! As long as you shower every night before we go to bed.”

Iza ‘clueless’ about the surprise

In 2014, Calzado told Philippine Daily Inquirer about what she wanted in a proposal and wedding: “I want something creative. Surprise me! I want a small and intimate outdoor wedding.”

By proposing in Sonya’s Garden, a beautiful private outdoor area, it seems her fiancé-to-be ticked off her checklist.

Videos on talent manager Noel Ferrer’s Instagram show what happened before the proposal, with Wintle talking to her friends and family. “She seems to be clueless,” said the Booky restaurant app founder.

He also carefully practiced his Filipino for her:

YOU KNOW THAT YOUR FUTURE HUSBAND LOVES YOU SOOOOO MUCH when he studies and understands and communicates with you in a language and culture where you took root. MAHAL NAMIN KAYO @missizacalzado & @benmwintle !!! ❤️❤️❤️ #IBIza #IzaBenWintle

He shared that he purposely argued with Calzado that morning to throw her off: he left wearing a V-neck white shirt even if she preferred that he wore a white polo, and then changed while in the car.

When asked what he would do if she said no: “All is lost. I’ll strip, I got nothing to lose right?” he joked.

Fortunately for him, he got the answer he wanted.

Later on, Calzado thanked guests and revealed that Sonya’s Garden in Tagaytay was one of her favorite places.

The “A Love to Last” actress, who lost her mom when she was 19 and her father in 2011, was touched that an aunt who has been her mother figure was present. Her own brother, and Wintle’s mother and brother, were also there for the special moment.

The couple started dating in 2011. According to a 2015 ABS-CBN report, their dates then included trips to the hospital where he was able to meet her father, Lito Calzado, before he passed away from cancer.

While they haven’t announced a wedding date yet, close friend Judy Ann Santos hinted in May 2017 that it could be on April 28, 2018. April 28 is said to be an “auspicious date” and is the same day that Santos and Ryan Agoncillo were married. JB