From ‘Get Out,’ ‘Us’ to ‘Twilight Zone’ reboot: Jordan Peele is horror-thriller’s new master auteur | Inquirer Entertainment
Close
menu
search 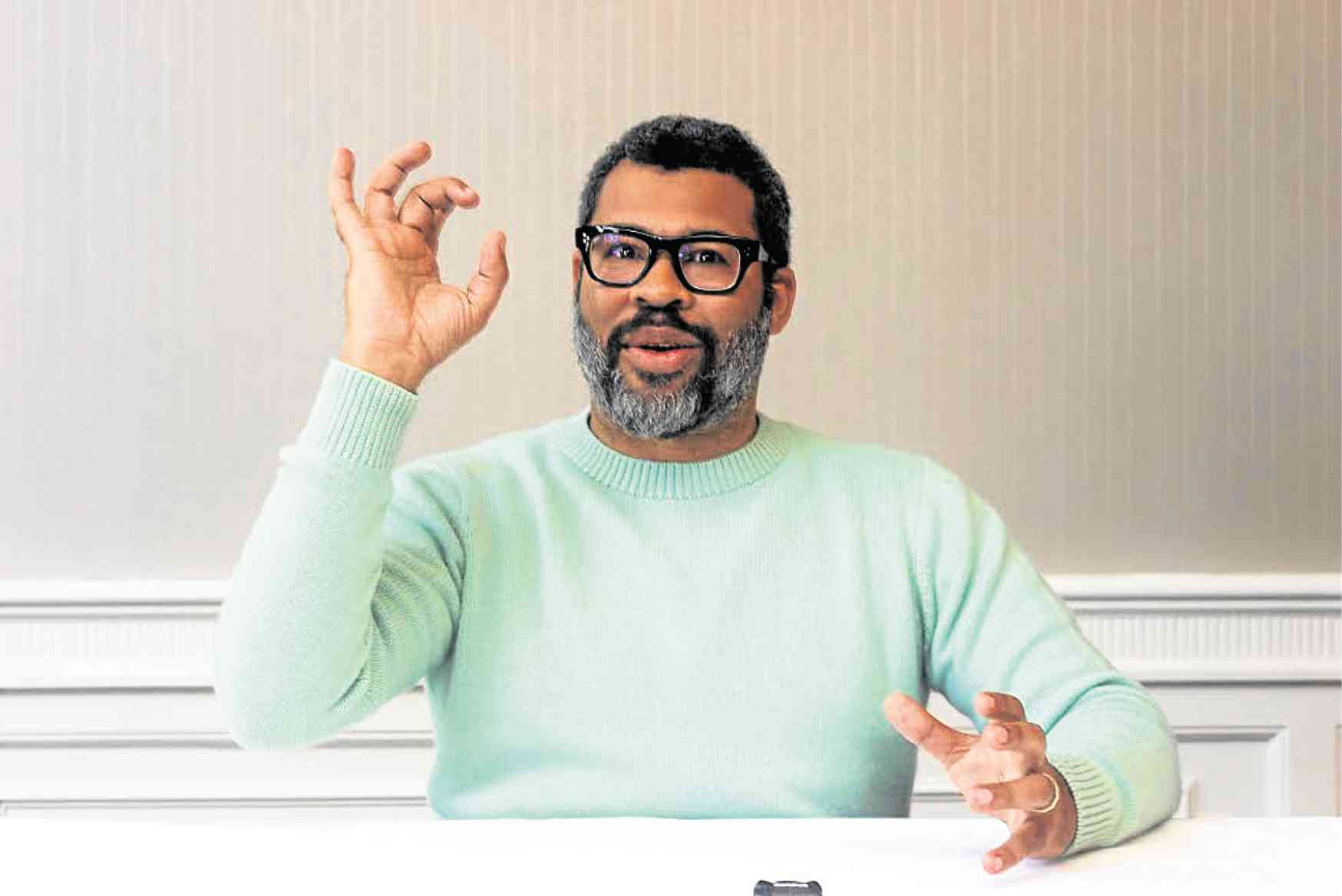 LOS ANGELES—“Us” is only Jordan Peele’s sophomore effort, but based on early critical acclaim, the director is one of the horror genre’s important new voices.

If anything, the new film starring Lupita Nyong’o proves that “Get Out,” which won Jordan a best original screenplay Oscar last year, was no fluke.

Cinema’s newest auteur darling, wearing a green sweater and black jeans, sat calmly in a room of The London Hotel in West Hollywood. He is by no means an overnight success. Before making a big splash with the hit “Get Out,” which also netted best picture and director Academy nods for Jordan, he cocreated and costarred with Keegan-Michael Key in the comedy series, “Key & Peele.”

As an actor, he also appeared as a regular on the “Mad TV” series, among other credits.

“It inspired me,” Jordan said of “Get Out’s” success. “It’s remarkable to go from making a movie where I felt like they’re going to pull the plug any second and that I’ve managed to fool the world into thinking this is a good idea (laughs). To go from that state to, I get to make another one and they’re going to trust me. I can’t tell you how much of a lifelong dream this was.”

Jordan, who also scored an Oscar best picture nomination this year for producing Spike Lee’s “BlacKkKlansman,” added, “I realize I’m in a privileged position where I can affect people—if not by making them think, then by giving them a good time. So, my mission is clear and it starts with me making the movie I wish somebody would make for me.”

“Us,” which Jordan wrote, directed and produced just like he did with “Get Out,” is about a family whose life is upended when a group of doppelgängers begins to terrorize them. Aside from Lupita, the horror-thriller also stars Winston Duke, Elisabeth Moss and Anna Diop.

The voice talent behind Bunny in “Toy Story 4” has a son, Beaumont Gino, with his wife, actress Chelsea Peretti.

He is narrating and producing a reboot of Rod Serling’s classic thriller series, “The Twilight Zone.”

Can you talk about your writing strategy for this one?  With both “Get Out” and this, I created a pretty detailed mythology, and set of rules, and when it is OK to break those rules and when it is not. The big decision with this one is when you create the mythology, how much do you give to the audience at the end versus how much you don’t?

My choice is to give them enough to be able to discuss and discover things. But with this film, I feel like if you throw everything in there, it ruins the scariness of a film.

What was the germ of the idea? The germ of the idea was my fear of doppelgängers (laughs). Since I was young, I had this vision of myself standing across the subway platform, and it just made me shudder to my core.

When I decided to make this movie, I realized that if there was a doppelgänger family, that would open up a whole new doorway of possibilities and be something I had never seen in the pantheon of doppelgänger films.

Have you met your doppelgänger in real life? No, I’ve never met my doppelgänger. Michael B. Jordan just doesn’t come anywhere near me (laughs), as many times as I stand outside of his house.

I’ve been compared to Geoffrey Owens from “The Cosby Show” my entire life. So that’s my doppelgänger.

On a lighter—or higher—note, you’ve been quoted as saying that you took less weed when writing “Us” than when you were writing “Get Out.” I have a son now. So, when I have to say things (laughs), I have to be careful of what he will read.  My process is always a combination of nightmares and visions that come to me and all the things that I’ve been inspired by.

Can you talk about your casting choices for this movie? I had to take the most beautiful people in the world and make them seem like normal human beings. I don’t know if I completely achieved that but, in the case of Lupita, she is a singular performer. 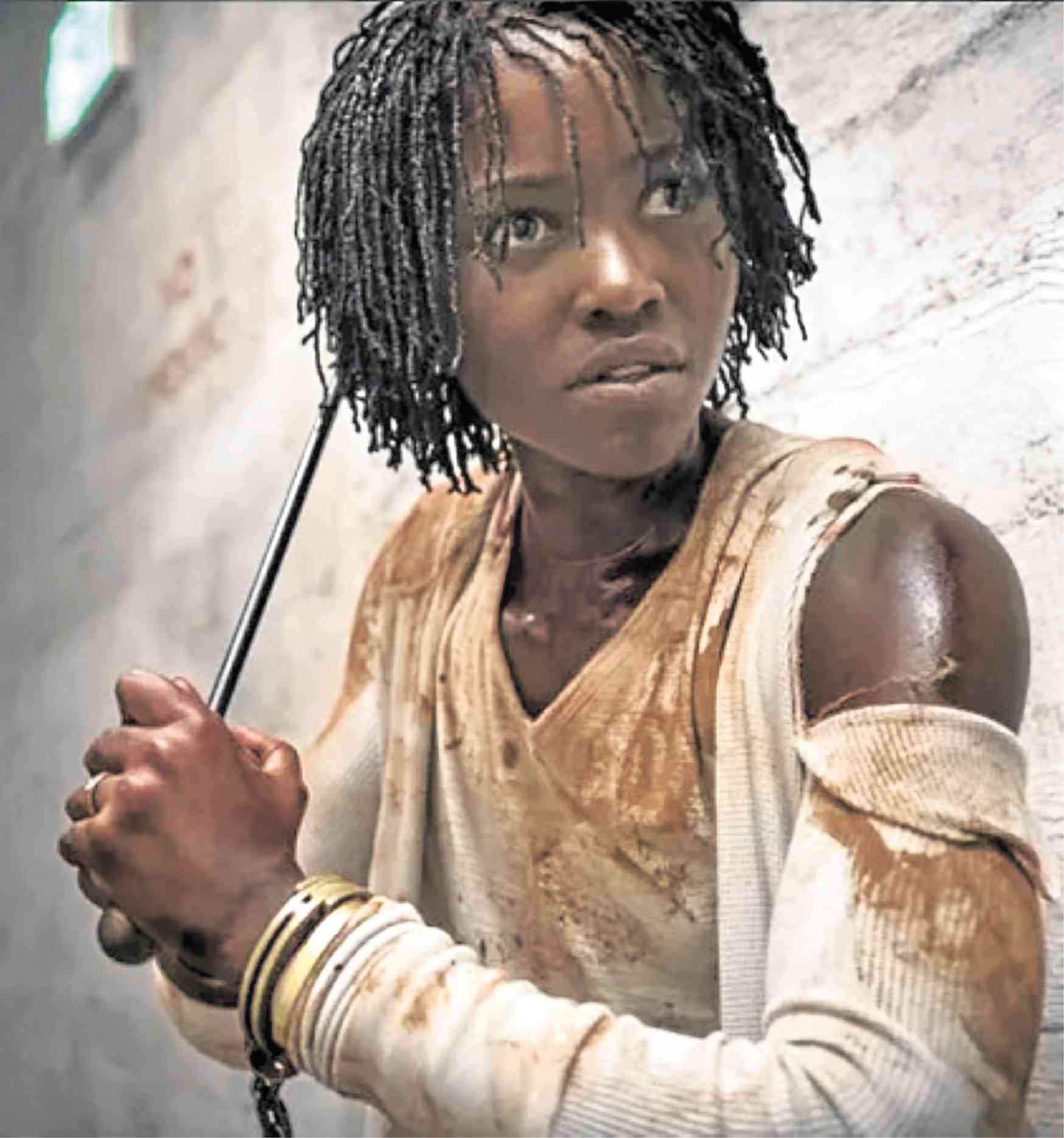 Lupita Nyong’o in “Us”

Winston Duke is also a beautiful man, but I made him a little more like me to take some of the edge off. I’ve been told that character (Gabe Wilson) must be based on me but it wasn’t, consciously.

People don’t believe that because he’s got the beard and the glasses. But now, I realize, looking back, I identify with all of the characters.

But to me, there was something about the Gabe character that is a very recognizable human being, a person who we all feel like we know instantly, yet I had never seen him in a film.

Or in a basic way, with this movie, which is just the idea of, let’s see what it looks like when there’s a black family at the center of a horror movie. Why haven’t we seen that film yet? But this lack of checkpoints in representation has a real effect on the black community and on everyone else, and the perception of what African Americans can be in story and in real life.

Do you think that with the current political situation, America is experiencing fear in the collective sense? This movie was about, like you said, what are our demons collectively? What is the shadow self of the “we,” of the “us?” I embarked on this, in terms of commentary—my starting point was the faction that is the United States.

I used images of the lighter half of the duality of this country, images of hope, of privilege, to, ultimately, tell this message, to subvert the myth that America is the good guy (laughs).

The privileges we enjoy as Americans are built on the backs of atrocities… All of my movies are about humanity and  human demons.

Can you talk about your vision for the doppelgänger family? I wanted to make each doppelgänger character be an individual, with his own things. That being said, I started with this idea—I’m terrified of cockroaches (laughs). I grew up in New York City, with these big, old cockroaches.

So, from an aesthetic and physical point of view, I started with that. And Lupita is the Queen Cockroach, right? She has to embody a regal sensibility, an erudite aura, which she does fantastically.

And cockroaches, right?  Death by cockroach (laughs). That’s a movie right there!

Can you talk about the reboot of Rod Serling’s “The Twilight Zone,” which you will narrate and produce?  There are no remakes of previous episodes. These are all new stories. This is a daunting proposition to step into the shoes of the master storyteller, of maybe any medium—Rod Serling.

In the past couple of years, I’ve heard people say, “It feels like we’re in ‘The Twilight Zone,’” over and over again.

We need more allegories because the only way we listen, quite often enough, is when we’re entertained and when the commentary is Trojan-horsed through great content.

So, “The Twilight Zone” is probably the most important show of all time for me. I just hope we can do a little bit of justice to Serling.