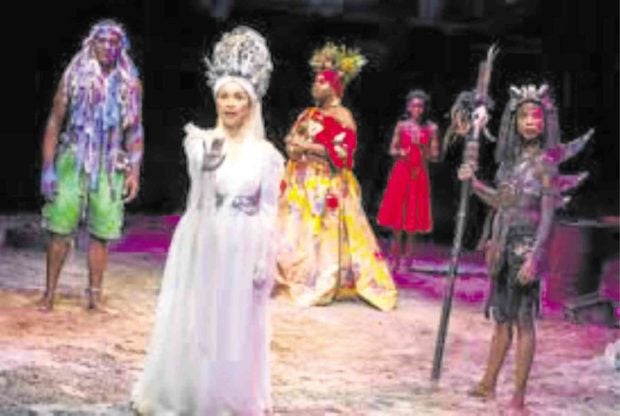 The author (second from left) in “Once on This Island”

There have been many articles written about audience members of live shows who misbehave during performances. It seems that this is a topic that never gets old, no matter how many write-ups have been published in various articles and social media posts.

Whether it’s the annoying fluorescent glow, the phone ringing loudly in the middle of a quiet scene, the full-volume phone conversation taking place in the house, or hearing the crispy, crunchy sound of a piece of candy being unwrapped, these modern times have seen more than its share of destructive distractions.

From curtain up to curtain down, my colleagues and I have experienced this. Sure, we’ll laugh about it now, but at the time those things happened, we were miffed.

Have we turned into such entitled savages that we’ve forgotten that live theater is made possible by the actual flesh-and-blood humans onstage whose job it is to tell stories while acting, singing and/or dancing, hoping to impart entertainment, perspective and emotion? Have we become so self-centered that the rules apply to everyone but ourselves?

Before the show, the ushers remind patrons about the house rules: at the absolute very least, put your phone on silent mode, no photography of the set (if and when applicable … some shows will allow and encourage photos for social media, while others are “I’ll sue you and your entire family if you take that pic” strict), and no photography or recording of the show.

However, allow me to heave a huge sigh here … Violators still abound, and go so far as to show off how sneaky they were on social media, posting their ill-gotten photos and audio files. And then later on, rant about how oppressed they are. (Hey, the ushers don’t make the rules, but they will enforce them.)

I’ve seen this firsthand only a few feet away from me.

One evening during the preshow for “Once on This Island,” just a few seconds after I made my entrance, while advising an audience member, I heard a small commotion a few rows away. One of our ushers was reminding a group regarding the “no photo” rule who then proceeded to get angry at the usher.

According to my friends who sat a couple of rows in front of them, this continued after the show, and their comments ranged from shamefully inappropriate to downright threatening.

So, what should we, as audience members, theater producers, theater owners and managers, do? How can we ensure that the theater-going experience is a fantastic one for all concerned?

First off, let’s start with the most basic rule upon which all the rest will be founded: Respect.

Respect for the personnel onstage, and for the persons seated next to us, in front of us and behind us. The theater is a hallowed space where audiences enter in order to be taken away to another world.

That suspension of disbelief should, as much as possible, remain undisturbed in order for the story to immerse the audience fully. Which means, no tweeting in real time while the show is happening. No selfies using the stage as the background while the actor playing The Phantom of the Opera is baring his soul over Christine, for example. No gossiping over the phone with your amigas while “La Vie Boheme” or “One Day More” is taking place.

Look, we don’t want to take your phones away. But is it so painful to not look at that screen for a few hours? Do theaters need to invest in expensive signal scramblers that are more a reflection of the audiences’ lack of discipline than anything else? Are we really that far gone?

There are many productions being staged in our fair city. “Ang Huling El Bimbo” and “Eto Na! Musikal nAPO!” are running. “Angels in America: Millennium Approaches” is opening on March 22. “Phantom of the Opera” is still running. And I’m sure that, during at least one performance, someone’s phone will go off, a bootleg is being sneakily recorded, or a photo is being snapped.

Please, for all our sakes, don’t be that guy guilty of any of the above.