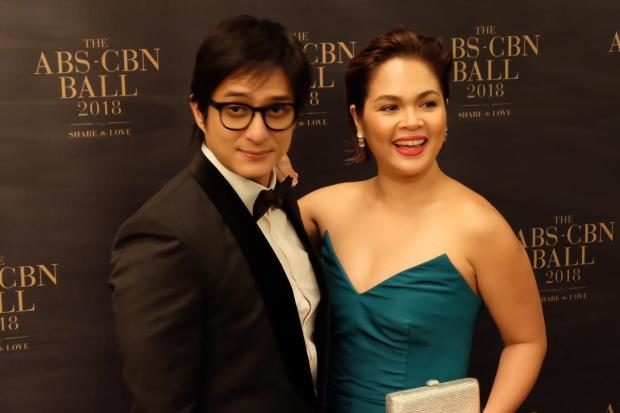 Ryan Agoncillo seemed to be in a reminiscent mood when he took to social media recently to share to his fans a memory from 14 years ago with then girlfriend and now-wife veteran actress Judy Ann Santos.

Agoncillo posted Wednesday, Feb. 27, a photo of Santos cooking in her kitchen, and narrated thus: “Close to 14 years ago, when we were just dating, we got into this really petty argument that just blew up.

“You know those fights that just go around in circles, where you eventually forget how it started and then just end up being quiet in the car on the drive home? We had lots of those.”

The argument happened while the two were in Los Angeles at the time and, as per Agoncillo, something magical came out of their lovers’ quarrel.

“Judy Ann had promised to cook adobo for our Filipino friends in LA. The plan was to make a big batch that they could then just throw in the fridge and reheat at least for the next 2 weeks. So that night, fight or no fight, I was sent out with a list of ingredients.”

Agoncillo said he came back with the ingredients close to midnight and found Santos in the kitchen having a glass of wine.

“Without uttering a word, I dumped the supplies on the counter, and immediately went to bed,” he said. “As I got up the next morning, imagine my surprise as I spot Juday still in the kitchen, apparently never having gone to sleep, still working and cooking up a frenzy.”

He said the kitchen, then, smelled “of passion and witchcraft.”

“Soon as I parked my butt on the kitchen stool, the cook wordlessly places a bowl in front of me and goes straight to bed,” he continued with his narration.

“It was almost noon, but the house was dead quiet and not a soul was in sight. I looked down into the bowl of fluffy white rice, topped with this dark but gleaming adobo still steamy fresh out of the pot. I took a spoonful. #angrydobo #madewithlove.”

Meanwhile, Luna gushed about the story, saying, “True love is when you still serve your partner even when you’re angry.”

Gonzalez, on the other hand, told Agoncillo he’s one of her favorite storytellers.

“You are forever one of my favorite storytellers I swear!!!!” she said. “Gawin nang libro yan!” 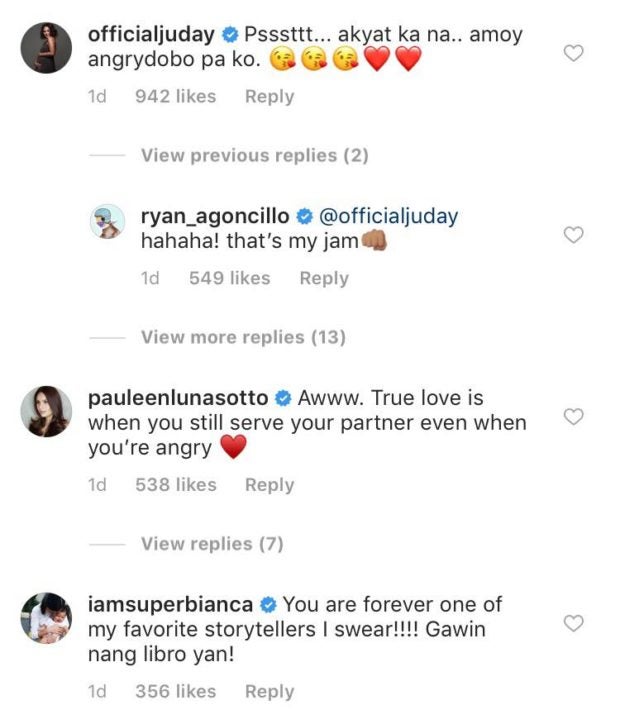 Alonzo also found the story behind the “angrydobo” sweet, while Laxa poked fun at him. 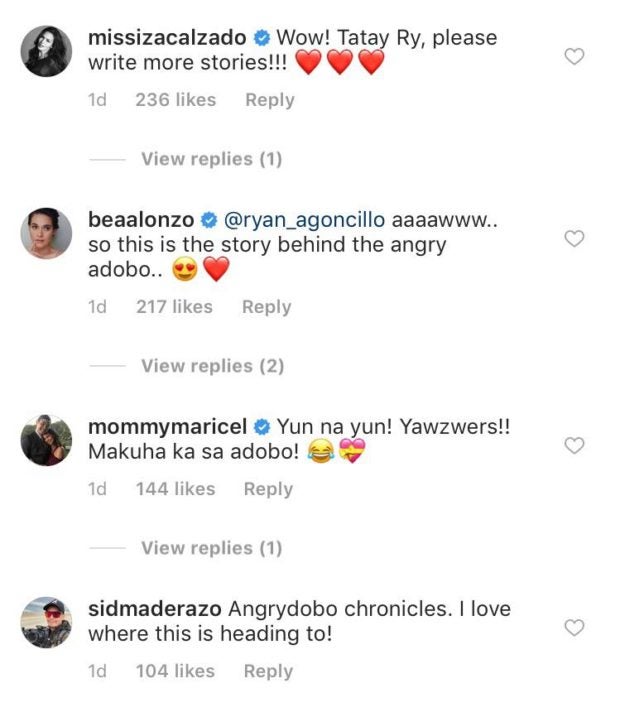 Santos and Agoncillo have been together for almost 15 years and married for nine. The two celebrated their ninth wedding anniversary in April 2018 in Italy. The couple will celebrate their 10 years of marriage this April 28.  /ra