BERLIN — The voice of the female filmmaker was louder than ever at this year’s Berlin Film Festival, with seven out of the 16 films in the competition section helmed by women, and female directors from all corners of the globe featured prominently.

There were originally 17 films in competition but one film from China was withdrawn.

This year’s festival, also known as the Berlinale, wraps up on Sunday. It has been rich with global women telling female-focused stories, including Michela Occhipinti’s feature debut “Flesh Out,” about the practice of gavage, the forced fattening-up of young girls before their weddings in Western Africa.

“We are half, maybe more than half the population,” she said of women. “(We are) feeling something different.”

Other female-centered stories included Macedonian director Teona Strugar Mitevska and her feminist satire “God Exists, Her Name is Petrunya,” ”37 Seconds,” a tender story from Japan about sex and disability from Hikari; and Austrian filmmaker Marie Kreutzer’s “The Ground Beneath My Feet,” which looks at a high-performing career woman struggling with a sister with mental illness.

There was also the black-and-white lesbian love drama “Elisa and Marcela” from Spanish filmmaker Isabel Coixet. 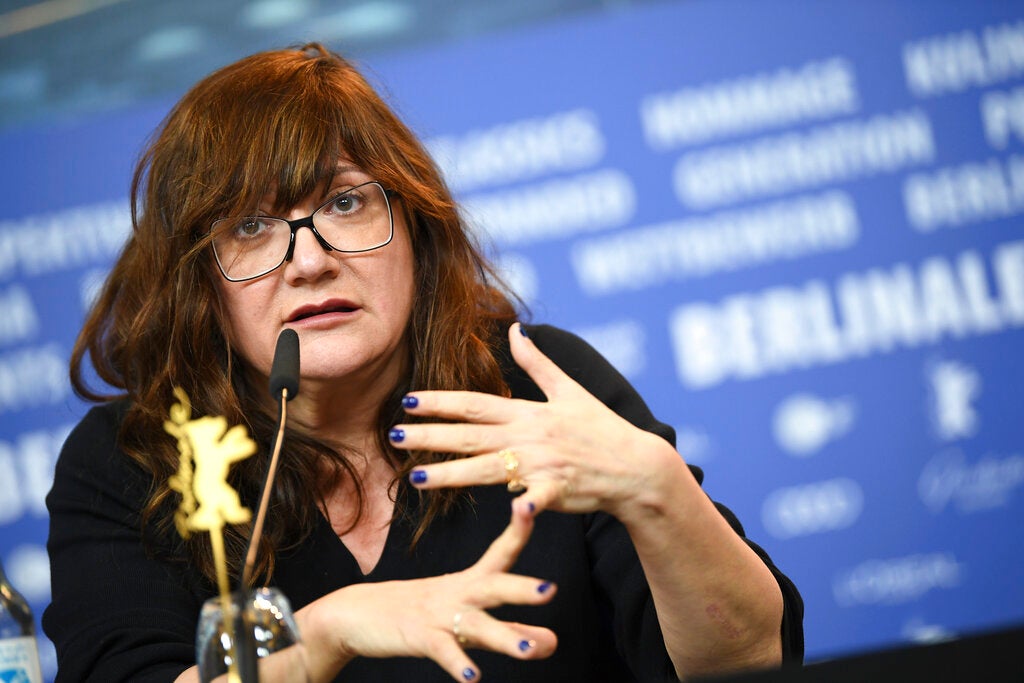 British director Joanna Hogg presented her fourth feature film, “The Souvenir,” which followed a young girl through film school in the 1980s. Part autobiographical, part fiction, “The Souvenir” stars Honor Swinton Byrne as a student filmmaker alongside her mother, Tilda Swinton, who plays her on-screen mom. 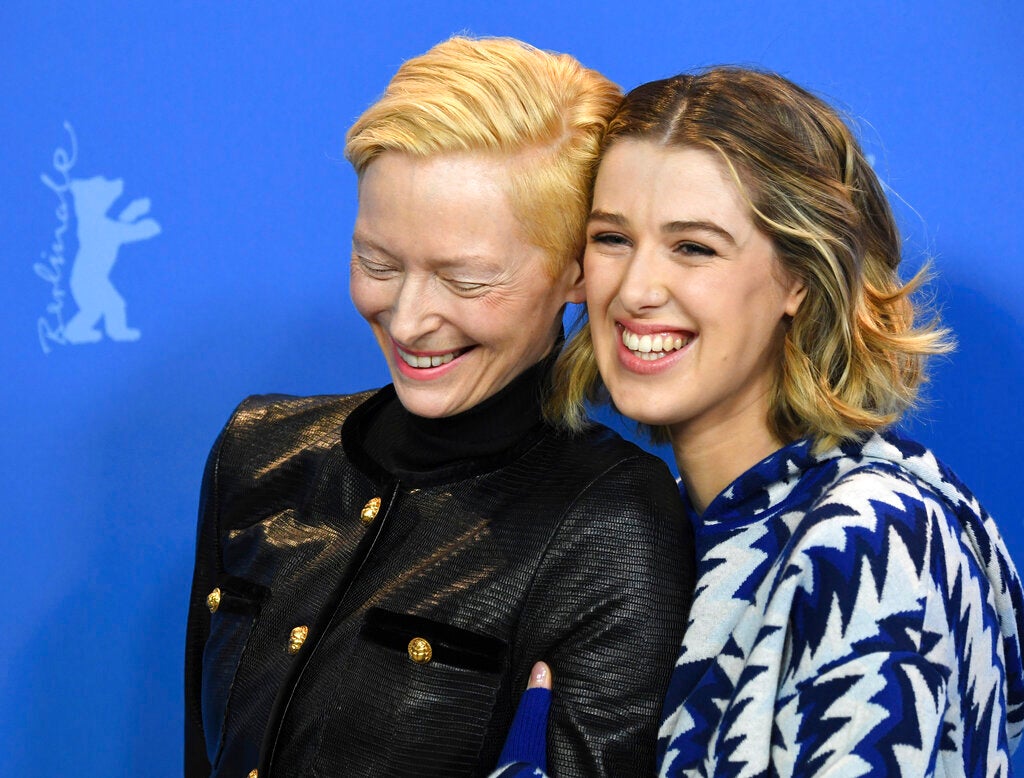 Actress Tilda Swinton, left, and actress Honor Swinton Byrne, right, pose for photographers during the photo-call for the film ‘The Souvenir’ at the 2019 Berlinale Film Festival in Berlin, Tuesday, Feb. 12, 2019. Image: Gregor Fischer/dpa via AP

Hogg says she wants to encourage more women to make films and explains that one of the reasons for making the movie was to show a woman as an artist.

“We all talk about films about directors like the wonderful ‘8 ½’ which I’m very inspired by, but they’re always these male directors, these sort of male egos,” she said. “So I’m kind of very interested in the female ego.”

Swinton, who has directed documentaries, says for her, the role models have always been there.

“I personally as a filmmaker was always aware of the great comradeship of female filmmakers. And you don’t have to look very far to know how many female filmmakers have always been making films. It’s just, they don’t necessarily get the column inches” in the press, she said.

That wasn’t the case for Danish director Lone Scherfig, who opened this year’s festival with “The Kindness of Strangers.” She says she didn’t have much inspiration from women filmmakers or the female characters she watched on screen growing up in Denmark.

“Women were always happy and pretty and I, even as a little girl, would go to the cinema in a starched dress with a bow and dress up in order to go to the cinema to watch those women and wanted to be them,” she recalled.

She says for her it was a big jump to making films “instead of just sitting, being, wishing you were Audrey Hepburn.”

Sitting pretty is far from the minds of many of today’s women filmmakers, and the characters they create on screen are also challenging gender stereotypes.

South African director Jenna Bass fought hard to get her contemporary all-female western “Flatland” made the way she wanted it, and even to be able to describe it as a western.

“I know that it breaks a lot of the rules but really the only thing that’s really fundamentally missing that is usually in a Western is macho guys, and I just don’t think that that’s a prerequisite of the genre,” she said.

Bass, like Scherfig, found the portrayals of women she watched on screen growing up to be unrealistic.

“My ideas about what a romantic relationship between a man and a woman or between anyone should be like was informed by movies,” she said. “And when life didn’t correspond to that … I thought that I’d done something wrong.”

She puts much of this down to the male dominance of the industry.

“All my role models were men, and all the films that I loved were about men. And I didn’t really think too much about that for quite a while until I think I just generally started develop my own kind of like political consciousness about the world around me and start to question why that was,” she said.

Indian filmmaker Zoya Akhtar was in Berlin for her movie “Gully Boy,” which looks at the urban rap music scene in India. She feels today’s women filmmakers are not only writing exciting female characters but “legitimate men.”

Bollywood superstar Alia Bhatt stars in “Gully Boy” as the feisty, charismatic Safeena. She says she is often approached with offers of “strong female characters” or “female-led stories” but jokes that she hopes for a day when that doesn’t need to be highlighted.

“Just get me a film and just be like you’ve got a good part. That’s it you know?” she said.

Polish director Agnieszka Holland’s “Mr. Jones,” the story of Welsh journalist Gareth Jones, also showed at the festival. Holland points out that some “extremely courageous and extremely creative filmmakers” have helped shape her career, including 90-year-old Agnes Varda, who was honored at this year’s festival with the Berlinale Camera award for lifetime achievement. 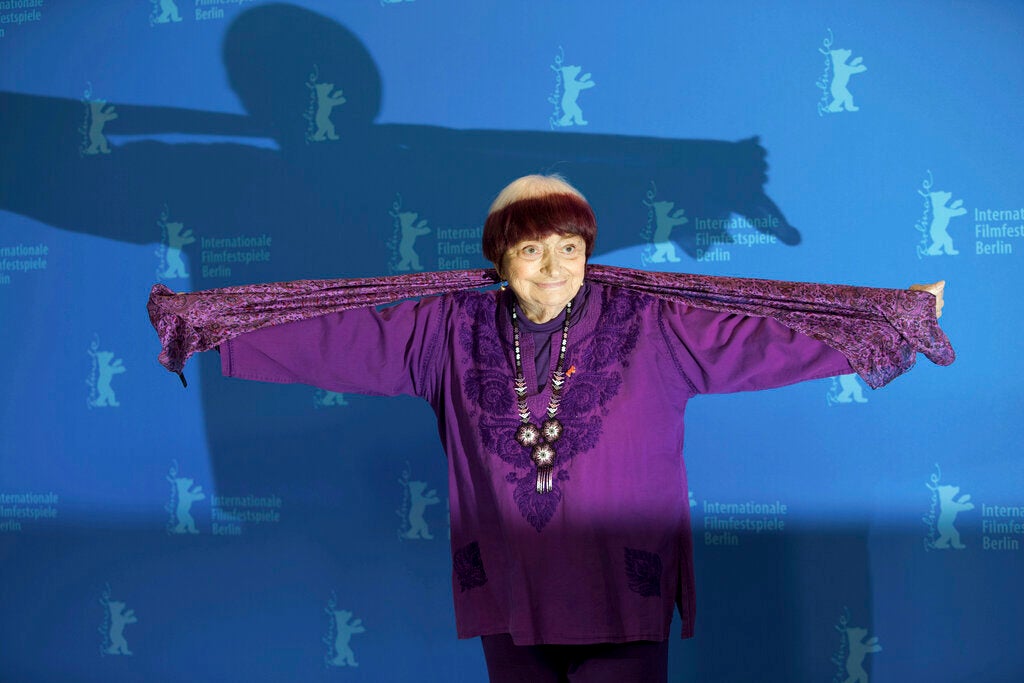 Director Agnes Varda pose for photographers during a photo-call for the film ‘Varda by Agnes’ at the 2019 Berlinale Film Festival in Berlin, Germany, Wednesday, Feb. 13, 2019. Image: Joerg Carstensen/dpa via AP

The 70-year-old concludes that there have been a “lot of wonderful women in history and will be even more in the future I hope. I think that we will take over.” NVG