Everyone was a winner at the 2019 SAG Awards afterparties last Sunday, Jan. 27, and no stars shone brighter than two minority ensemble casts.

The “Black Panther” cast may have taken home the best ensemble in a motion picture award, but the “Crazy Rich Asians” (CRA) cast, nominated for the same award, celebrated the achievement nonetheless. 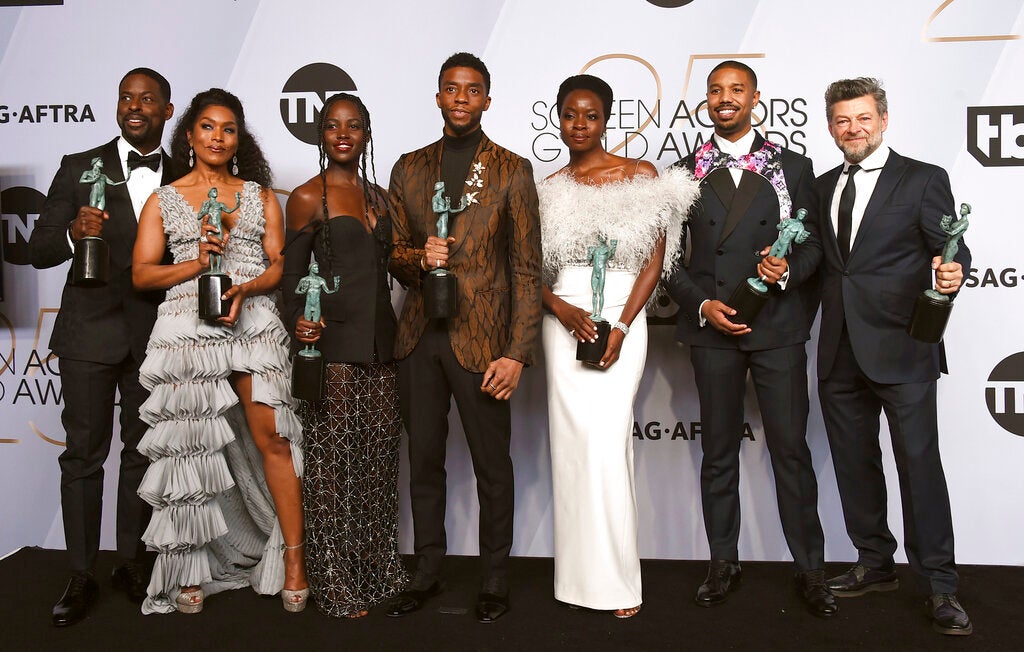 Sterling K. Brown, from left, Angela Bassett, Lupita Nyong’o, Chadwick Boseman, Danai Gurira, Michael B. Jordan, and Andy Serkis pose with the award for outstanding performance by a cast in a motion picture for “Black Panther” in the press room at the 25th annual Screen Actors Guild Awards at the Shrine Auditorium & Expo Hall on Sunday, Jan. 27, 2019, in Los Angeles. Image: Jordan Strauss/Invision/AP

The “CRA” cast even jumped out of their seats when the winner was announced, People reported on Jan. 28 — the race was still a win for minority actors in America, after all.

During People magazine’s afterparty held at the Shrine Auditorium in Los Angeles, the two ensemble casts united for a photo. Included in it were Fil-Am actors Nico Santos of “CRA” and Darren Criss, who won best male actor in a miniseries for “The Assassination of Gianni Versace: American Crime Story”.

Even Mike Myers joined in on the fun — and made for a hilarious photobomb, as “CRA” director Jon M. Chu noted on Instagram.

British-Malaysian actor Henry Golding, who played heartthrob bachelor Nick Young in “CRA”, shared the photo on Instagram with a touching message. “Sadly @crazyrichasians didn’t come away with the result but so glad that both films have become a flag bearer for people of [color] all around the world.”

Santos, who starred in “CRA” as Nick’s cousin Oliver T’sien, shared the photo from another angle.

“This is the future I want to live in…and the future is now,” he stated, with the hashtag #RepresentationMatters. JB