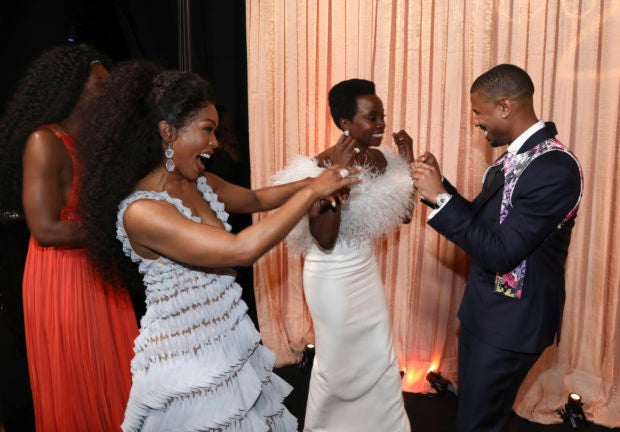 Angela Bassett, from left, Danai Gurira and Michael B. Jordan celebrate “Black Panther” winning the award for outstanding performance by a cast in a motion picture at the 25th annual Screen Actors Guild Awards at the Shrine Auditorium & Expo Hall on Sunday, Jan. 27, 2019, in Los Angeles. Image: Invision/Matt Sayles via AP

While actors are accustomed to being on camera, not every starry moment at the Screen Actors Guild Awards makes the screen. Here’s a look at some of the best moments that took place off-camera:

Moments after winning the night’s top honor, Chadwick Boseman expounded on his definition of the song “To Be Young, Gifted and Black” backstage after “Black Panther” won the show’s top award.

Boseman said the song by Nina Simone is one of his favorites and the title is among his top “sayings in poetry.” The actor said breaking through while being black even with talent is a “difficult task.”

“It speaks to the fact that you have the same dreams as other people. You have equal or more talent at times, but you don’t have the same opportunities,” said Boseman, while several “Black Panther” cast members including Michael B. Jordan, Lupita Nyong’o and Angela Bassett stood behind him backstage.

“You don’t necessarily have the same doors open to you, the same nepotism, the same money or resources nor have family members who have achieved things that you want to do,” he continued. “It’s a difficult task. But our task in history has not been the same because we’ve been relegated to playing the sidekick or the sideshow or backstage or not here altogether.”

Pollak and Marin walked all around the backstage interview room at the Shrine Auditorium, letting journalists hold their heavy SAG Award trophies.

“Like to hold it? Take a number!” barked Pollak as several reporters reached for his award at once. A number of reporters pulled out their cellphones to capture the moment.

Pollak let one reporter hold his award and take a picture with it.

As people started filming him he yelled, “Be sure you tag me on Instagram!”

The two won as part of the nine-actor cast of the Amazon series. When some cast members took the stage for interviews, the show’s star Rachel Brosnahan waved at Pollak and Hinkle to come back toward them.

Getting close to a SAG trophy

Glenn Close was mesmerized by the Screen Actors Guild trophy before she got her own to take home.

Close said backstage Sunday that all night she’d been looking at an image of the trophy and admiring the physique of the actor it depicts.

I was thinking “who modeled for that?” she said as she looked at the SAG Award she had just won for best actress in a film for “The Wife.”

If Emily Blunt could give advice to her younger self just getting a SAG card, she would tell her younger version to not watch too many movies.

“The main thing I’ve learned over the years is you have to be open,” said Blunt while speaking to reporters backstage after winning best female supporting actor for her role in “A Quiet Place.” ”Have experiences, soak up the world. Don’t watch too many movies even.”

Blunt said filming the birth scene was a “daunting” task.

Blunt said she was just as surprised to win her award as her husband John Krasinski, who directed and starred in the film.

“My favorite thing about ‘A Quiet Place’ for sure to was working with John,” she said. “A lot of people said, you’re going to be divorced before it’s over. They were wrong, it brought us closer.”

Many of the stars mingled among each other in the Shrine Auditorium during a commercial break at the SAG Awards.

Actress Glenn Close was backstage having a chat with Angela Bassett and her husband Courtney B. Vance. Closed smiled and placed her hand on Bassett’s shoulder as the three broke into laughter, about 10 minutes before Close won an award for best female actor in a leading role.

While dinner music played, Tracy Morgan walked between tables with his wife, giving handshakes to several attendees. The cast of “Crazy Rich Asians” stayed put at their tables

The SAG Awards is also a union meeting of sorts, and Lily Tomlin had the hard job of trying to make announcements to a crowd that was still taking its seats.

Before Sunday night’s telecast began, Tomlin took the stage to urge the stars in the room to donate their time and money to the charitable SAG-AFTRA Foundation.

Tomlin told the audience that Oprah Winfrey had recently volunteered, and “if Oprah can make time, so can you.”

Most were chatting and scrambling to get to their seats while Tomlin talked.