Non-live Fox ‘Rent’ is ‘No day but yesterday’ — TV review 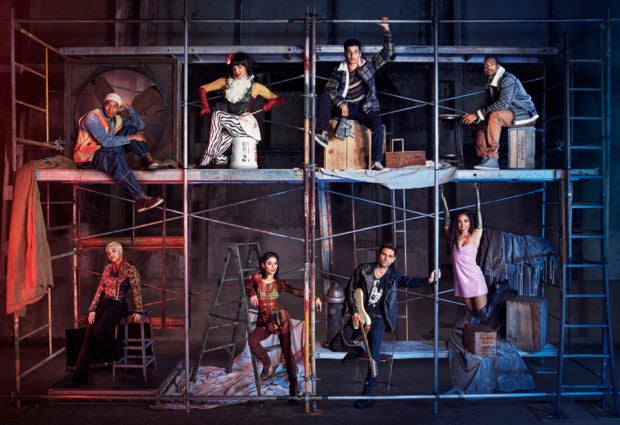 Fox’s live broadcast of the rock musical “Rent” had a chance to show off the flexibility and work ethic of Broadway in the face of a set-back — and completely blew it.

The musical about people living and dying in poverty with AIDS was unable to overcome a simple foot injury to one of its stars, scraping the idea of going live and relying on pre-recorded footage.

Producers promised the show would go on but it really didn’t. The majority of the dress rehearsal from the night before was broadcast instead of really being live. This is the very opposite of the show’s ethic “no day but today.”

The creators were unable to respond after Brennin Hunt’s broken foot, even though examples from Broadway abound, including Andy Karl finishing a preview of “Groundhog Day” with the use of a cane in 2017 after tearing his anterior cruciate ligament. He was onstage when the show officially opened just 72 hours later.

The decision Sunday left the “Rent” cast marooned on Stage 16 on the Fox lot in Los Angeles until the finale, a disastrous idea that rightfully incensed anyone who loves live theater. To be honest, even in rehearsal, the show lacked sustained sparks, despite an overenthusiastic audience.

The rock musical, by Jonathan Larson and inspired by the Giacomo Puccini opera “La Boheme,” celebrates survival among the artists and homeless of New York’s East Village in the early 1990s. Jason Sherwood’s sets were messy, scaffolding-heavy spaces with little beauty, except the lovely Christmas tree made of recycled materials. Realistic snow fell, but the musical’s gritty language was excised.

The show shared DNA with the original 1996 Broadway production, including original director Michael Greif and original costume designer Angela Wendt. Original Broadway cast-members — including Idina Menzel, Anthony Rapp and Taye Diggs — also showed up for a rollicking reprise of “Seasons of Love,” singing beside their successors, a very nice touch.

Tinashe nailed an awesome “Out Tonight” and was a great Mimi Marquez, but Jordan Fisher initially seemed overmatched by playing Mark Cohen, though he rose to the occasion by the end. Hunt successfully lit live candles during rehearsal and showed ability to hit his marks despite his bandaged foot while live but otherwise played his Roger with as much honesty as a hunky villain in a Disney Chanel teen show.

Brandon Victor Dixon sparkled as Tom Collins, proving again to be a supremely natural live performer. (He was an awesome Judas in “Jesus Christ Superstar Live” and really should be cast in every live broadcast show from now on, providing they are truly live.) Valentina from “RuPaul’s Drag Race” was a fine Angel Dumott Schunard but often lacked the nuance her doomed role requires.

Vanessa Hudgens deserves credit for just considering the role of Maureen Johnson — and doing the insane, manic “Over the Moon” — but did really well, particularly in the duet “Take Me or Leave Me.” Menzel, who originated the role, has nothing to fear but kudos for Hudgens. And Keala Settle helped make the iconic “Seasons of Love” a highlight.

The heartbreaking choral “Will I” was done with understated beauty — with audience members holding candles — and the big “La Vie Boheme” was a complex, if overly long, success. “Without You” movingly reminded us of the horror of AIDS.

The production is part of broadcast TV’s ongoing fascination with theater musicals, which kicked off in 2013 with NBC’s “The Sound of Music Live!” and includes such entries like “The Wiz Live!” and Fox’s “Grease Live!”

Their fate seemed to be in danger following the poorly rated 2017 production of “A Christmas Story Live!” but last Easter’s telecast of “Jesus Christ Superstar Live in Concert” was critically acclaimed and seemed to stem the ratings slide. But being live is not just important to this endeavor. It is at its very foundation — and “Rent” failed the test.