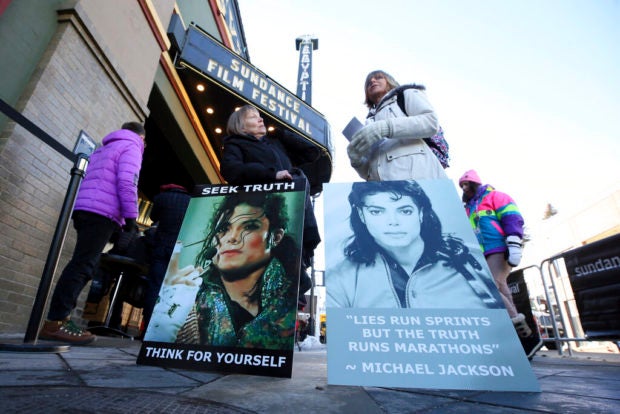 FILE- In this Jan. 25, 2019, file photo Brenda Jenkyns, left, and Catherine Van Tighem who drove from Calgary, Canada stand with signs outside of the premiere of the “Leaving Neverland” Michael Jackson documentary film at the Egyptian Theatre on Main Street during the 2019 Sundance Film Festival in Park City, Utah. Michael Jackson’s family members said Monday, Jan. 28, that they are “furious” that two men who accuse him of sexually abusing them as boys have received renewed attention because of a new documentary about them. The family released a statement denouncing “Leaving Neverland,” a documentary film featuring Jackson accusers Wade Robson and James Safechuck. Image: Danny Moloshok/Invision/AP, File

LOS ANGELES — Michael Jackson’s family members said Monday that they are “furious” that two men who accuse him of sexually abusing them as boys have received renewed attention because of a new documentary about them.

The family released a statement denouncing “Leaving Neverland,” a documentary film featuring Jackson accusers Wade Robson and James Safechuck that premiered last week at the Sundance Film Festival and is set to air in the spring on HBO and the U.K.’s Channel 4.

The family points out that Jackson was subjected to a thorough investigation that included a surprise raid of his home, the Neverland Ranch, but was still acquitted at his criminal trial in 2005, in a case involving another young man.

Robson testified at that trial, saying he had slept in Jackson’s room many times, but that Jackson had never molested him. Safechuck made similar statements to investigators as a boy. Jackson died in 2009.

Both men filed lawsuits in 2013 saying stress and trauma had forced them to face the truth and admit they were sexually abused. The suits have been thrown out on technical grounds but are under appeal.

The Jackson statement calls the men “perjurers” because of this reversal, saying the family is “furious” that media outlets without evidence have chosen “to believe the word of two admitted liars over the word of hundreds of families and friends around the world who spent time with Michael.”

“Leaving Neverland” director Dan Reed said in a statement Monday that the film focuses only on the two men and their families because he felt “no need to include the opinions of people with no direct knowledge of what happened” to them.

“Anyone who sees the film will know it is solely about hearing the stories of two specific individuals and their families in their own words, and that is a focus we are very proud of,” Reed said.

Reed has said previously he has no doubts about the validity of the men’s claims.

The family insists that truth and evidence are on their side.

“We are proud of what Michael Jackson stands for,” the statement said. MKH