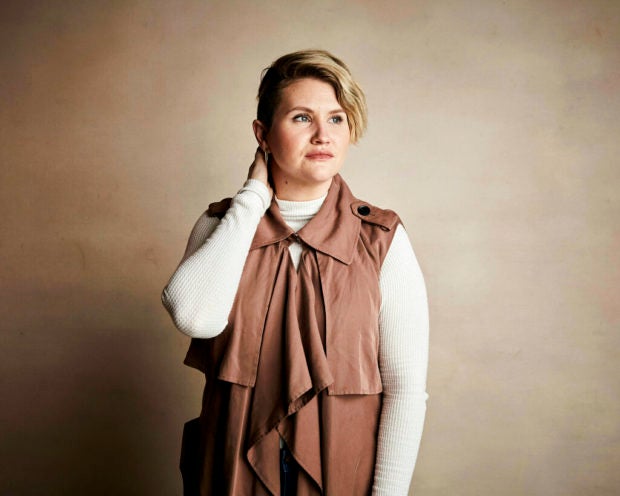 Jillian Bell poses for a portrait to promote the film “Brittany Runs A Marathon” at the Salesforce Music Lodge during the Sundance Film Festival on Sunday, Jan. 27, 2019, in Park City, Utah. Image: Taylor Jewell/Invision/AP

PARK CITY, Utah — When Jillian Bell is offered roles that have to do with body issues, they usually fall into two buckets: They’re either making fun of the character’s weight, or, they’re not presenting it in a way that she finds compelling or authentic.

It’s why when she read the script for “Brittany Runs a Marathon,” which premiered Monday at the 2019 Sundance Film Festival, she kind of couldn’t believe it. The film, from writer-director Paul Downs Colaizzo, was about a woman in her 20s living a fun, but not necessarily healthy, life who turns things around when she decides to start running.

It’s a charming and inspirational film from the first-time director that co-stars Lil Rel Howery and Michaela Watkins.

The filmmakers are currently looking for distribution.

“I have wasted so much time in my life thinking negatively or consuming my day with body image,” Bell said. “I’m lucky I’ve had great movies come my way that had nothing to do with it. But I have had a lot of other offers that do have a lot to do with body image and what people think — and it’s a weird thing to talk about — but what they think a person like me is worth. I joke about this but, like, if you have a body that looks like mine, you’re not worthy of love.”

But she found that she related to Brittany. She felt real to her. Because she kind of was. The character was inspired by one of Colaizzo’s college friends and former roommates.

“She was in her 20s working in theater and living her best life in maybe the wrong sense of the word. And there was a shift around the time when I moved in where she started to realize she wants something else,” Colaizzo said. “She started running and by the time she was out of the apartment, she had lost 80 pounds, had a new job and was working her way out of debt.”

Now the real Brittany is married and works in genocide prevention, which, he laughed is, “Too good. If you put it in a movie you wouldn’t believe it.”

Bell, in one of her first dramatic performances and leading film roles, experienced her own sort of transformation during production. She realized that she did enjoy more dramatic material, as taxing as all the crying was. And she lost 40 pounds — the last 11 pounds during filming.

“I trained beforehand because I did almost zero percent exercise before this film came along,” Bell said. “I actually looked up something on Pinterest that was like how to train from couch to 5K. It was intense, but I wanted to go through the whole experience of what she went through.” MKH

McCarthy and Grant on New York, forgery and friendship