MANILA, Philippines — “Sakaling Maging Tayo” did not only serve as McCoy de Leon and Elisse Joson’s first movie together, but also paved the way for the former couple to patch things up. 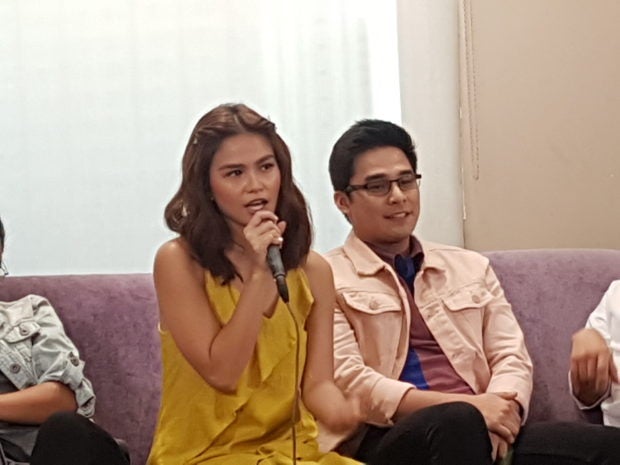 Elisse Joson and McCoy de Leon during the bloggers’ conference of “Sakaling Maging Tayo” at Restaurant 9501 in Quezon City. PHOTO by Krissy Aguilar/INQUIRER.net

De Leon admitted that he and Joson only get to see each other at work and this project paved way for them to be together more often.

He said, “Kasi sabi ko nga po tuwing trabaho lang kami nagkakasama. Eh yung movie isang taon namin ginagawa. Kaya isang taon din kaming nagkakasama (We only see each other at work and we were together in this movie for one year.)

De Leon said he also learned professionalism and to set aside his personal feelings.

(In this movie, we had discussions on how we are going to work professionally. That’s why maybe there are things that changed in me. We put more value on our work rather than on ourselves.)

Meanwhile, Joson said the movie made her forget about the past and focus on the positive things.

“We’ll just forget about what happened and then we’ll think of the positive things nalang sa naging outcome nung movie,” she said.

The former sweethearts recently revealed in an interview with “Tonight With Boy Abunda” that they are not friends and are not on speaking terms outside work. However, they never admitted the reason why their communication stopped.

The film tells the story of Pol (De Leon) and Laya (Joson), two college freshmen who accidentally met during the last day of school in Baguio City.

After Pol witnessed Laya’s breakdown because of a heartbreak, he decided to make the latter’s last night in Baguio memorable through a series of dares.

RELATED STORIES:
Rift between Elisse and McCoy evident to ‘Sakaling Maging Tayo’ costar
McCoy de Leon, Elisse Joson not talking with each other for now