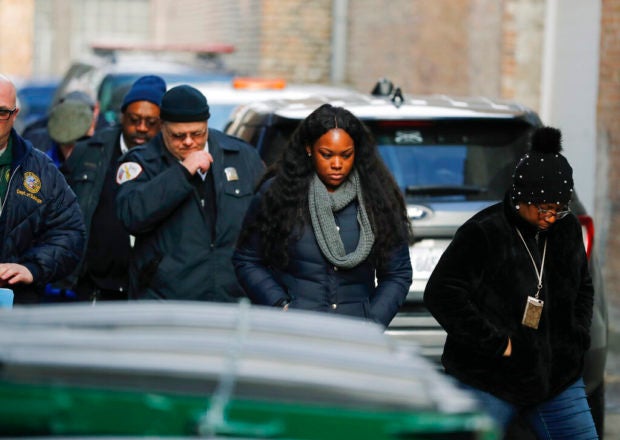 City inspectors from the Department of Buildings arrived at the studio space for musician R. Kelly in Chicago on Wednesday, Jan. 16, 2019. Image: Jose M. Osorio/Chicago Tribune via AP

Building Department spokesman Gregg Cunningham says the agency will list the violations during a court hearing next week. He says the inspectors were looking at plumbing, electrical systems and carpentry.

Kelly’s attorney, Steve Greenburg, says no one was living at the studio and it should not be surprising that it included places for sleeping or taking breaks.

Kelly has been hit in recent weeks with sexual misconduct allegations. The Lifetime documentary series “Surviving R. Kelly” recently drew fresh attention to the allegations and the #MeToo and #MuteRKelly movements have held protests outside the studio demanding promoters stop booking his concerts.

Read Next
McCoy, Elisse say it was difficult working on new film, consider themselves ‘ex-lovers’
EDITORS' PICK
Water remains our saving grace right now
The biggest lottery jackpot in the world is $158 million, and even someone from the Philippines could win it
Smart 5G goes live
COVID-19 cases in PH overshoot 122,000 mark
51% of Filipinos think it’s dangerous to publish anything critical about Duterte admin — SWS
PhilHealth mess: Whose heads will roll? Roque says he can’t wait to name names
MOST READ
Captain astonished that his ship delivered Beirut explosive
‘Vexed’: Guanzon raps Topacio over Alzheimer’s remark
Locsin to China: Don’t overinterpret
COVID-19 cases in PH overshoot 122,000 mark
Don't miss out on the latest news and information.