Georgina Wilson and her cousin Isabelle Daza’s husband Adrien Semblat garnered laughs for their “intimate pose” in a photo taken during a recent family lunch at Wilson’s house.

The Filipino-British beauty proudly said that she cooked for 18 people to mark the engagement of her cousin, Ava Diaz and her boyfriend Luch Zanirato. She shared about the moment to fans via her Instagram account on Sunday, Jan. 13.

Included in the black and white family photo are Wilson, her siblings Jessica and Samuel, as well as her son Archie. Semblat was also present alongside Daza, their son Baltie, Daza’s mother Gloria Diaz, Ava, Zanirato and Daza’s brother Rafael.

Daza used the same platform on Sunday to post an identical but this time, colored family photo.

Fans of the “It Girls” took to the comments section of both posts to point out Wilson and Semblat’s position. In the photo, Semblat was sitting on the carpeted ground with his head on Wilson’s lap who is sitting on the giant couch.

“Am I the only one that noticed Adrien and Georgina’s sort of intimate pose?” laughingly asked one netizen, Dawn Landicho (@dawnoffthewall).

One fan, @celinerazon, commented that Semblat and Wilson looked like they were doing a prenup shoot.

“Na-wrong side [yata] ng sandal si Adrien? (It looks like Adrien sat on the wrong side?)” said another fan, @sheshe261990. In the photo, Daza was sitting at the opposite end of the couch.

Meanwhile, one netizen, @cest.moi.b, noticed another humorous position in the photo, this time involving Diaz and Zanirato: “No one noticed Gloria and her son-in-law. That casual creeping foot.”

While the majority of the “It Girls” fans poked fun at Semblat and Wilson’s position, one netizen, @icxvii_ollie, was not amused by the photo. She commented that it is both weird and awkward whether or not they are cousins-in-law for the two to pose like a couple. 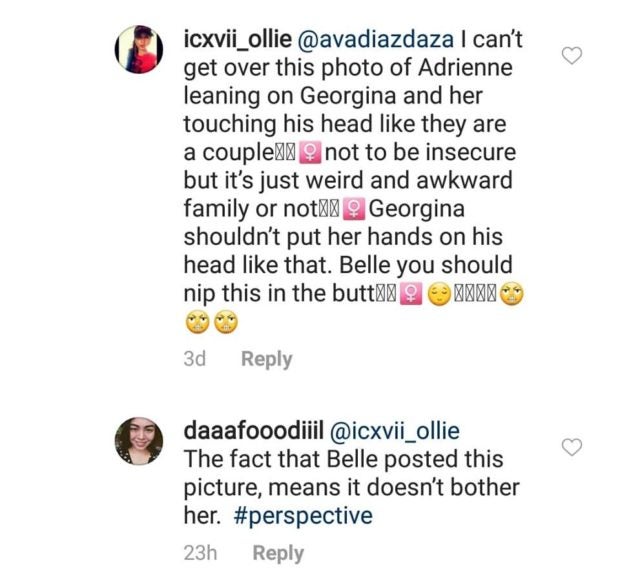 One fan, @daaafooodil, replied to the netizen’s comment in defense of Semblat and Wilson: “The fact that Belle posted this picture means it doesn’t bother her #perspective.” JB