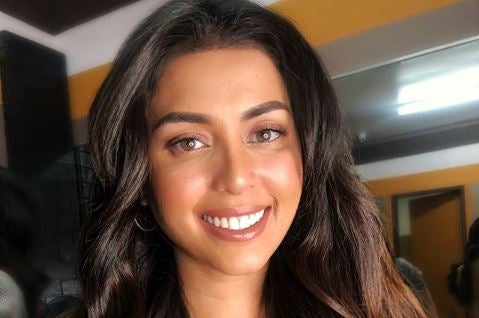 Miss Universe Philippines 2014 MJ Lastimosa refuted a netizen’s accusation that she was “selling” herself during the Miss Universe pageant in Bangkok, Thailand, last December.

The exchange happened in the comments section of Miss Universe 2018 Catriona Gray’s post last Jan. 8 that showed Gray in New York City. The netizen’s (a certain Lou Yanong) initial comment appears to have been deleted, but Lastimosa’s reply is still visible. The beauty queen asked the netizen, who seemed to have accused her of being seen with a man, which guy she was referring to.

Lastimosa clarified to the netizen that she was with the sister of Gaylyne Ayugi, Miss Kenya 2014, and Miss Universe dentist Dr. Raul Gonzalez in Bangkok.

“@lou.yanong guy who? As far as I remember I am with @geegee_ayugi’s sister and @drgsmile our miss universe dentist,” replied Lastimosa. “Be careful with your words.”

Ayugi, meanwhile, was baffled by the netizen’s claims. The netizen, however, did not stop there and insisted that the “gossip” was true all along. 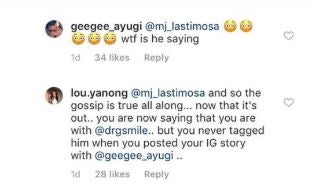 Lastimosa replied to Ayugi that the netizen was insinuating that she was selling herself. “@geegee_ayugi hahahaha she’s basically saying I am selling myself,” she wrote. 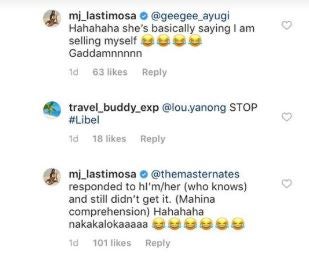 She later on told the netizen to be more discerning and said she was with the pageant directors during the pageant. 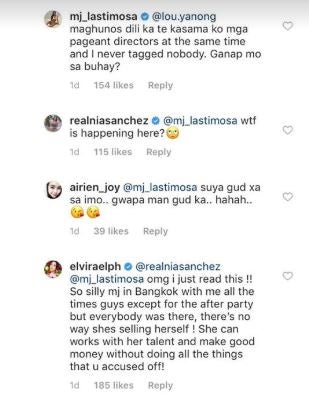 By then, even Miss USA 2014 Nia Sanchez took to the comments section to ask what was going on. Miss Indonesia 2014 Elvira Devinamira, meanwhile, thought the netizen’s claims were “silly” as Lastimosa was with her the entire time in Bangkok, except for the after-party.

“@realniasanchez @mj_lastimosa omg I just read this!! So silly MJ [was] in Bangkok with me all the [time] guys except for the after party but everybody was there,”Devinamira wrote. “There’s no way she’s selling herself!”

She also came to Lastimosa’s defense, saying she can work with her talent and make good money without having to sell herself. Lastimosa, after all, is also an engineer aside from being a beauty queen, actress and host.

“She can [work] with her talent and make good money without doing all the things that you accused [her] [of]!” added Devinamira.

In the end, Lastimosa brushed off the netizen’s baseless accusations.

“@elviraelph they can’t accept that we can travel with our own money I guess…” Lastimosa told Devinamira.  /ra