Kris Aquino admitted that she gave her former project manager funds to boost social media posts so that she could protect her brother, former President Benigno “Noynoy” Aquino III, against internet trolls. 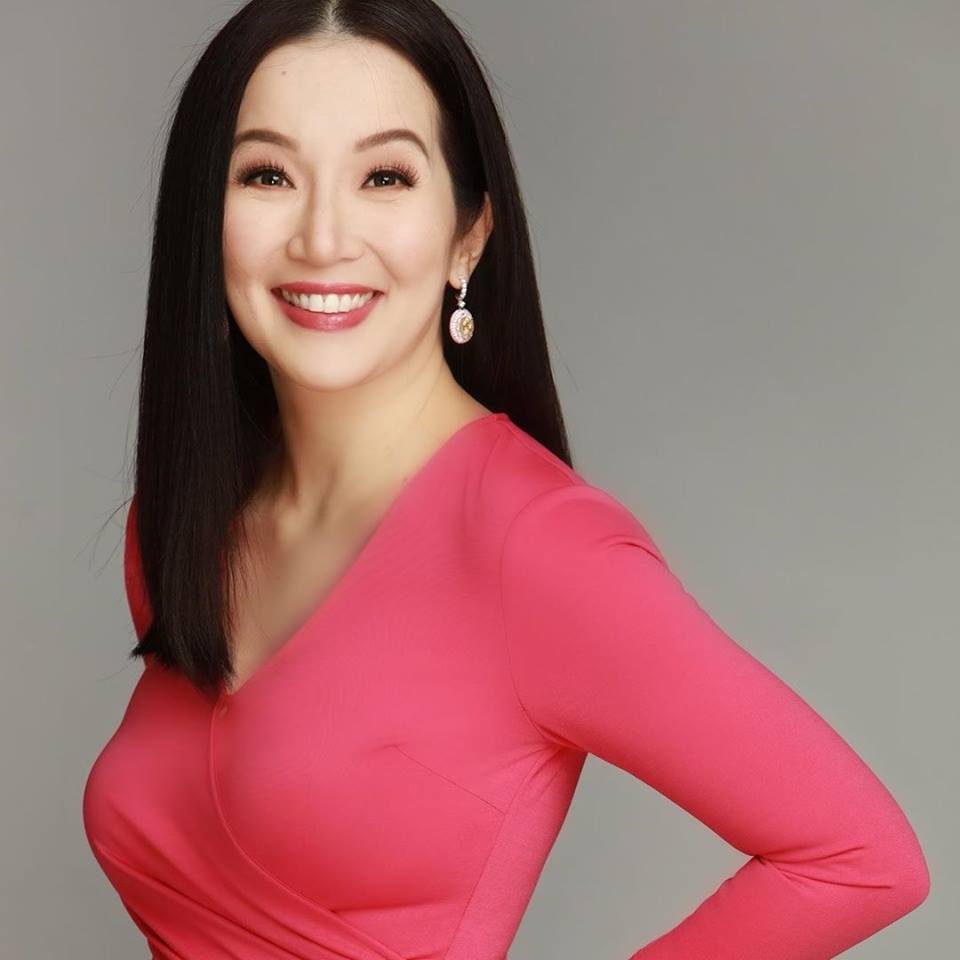 The first screenshot, shared on Jan. 2, showed messages dated back to April 29, 2018. In the message, Laurio asked Nicko to boost an article which criticized pro-Duterte bloggers Mocha Uson, Sass Sasot and RJ Nieto a.k.a. Thinking Pinoy.

NICKO, PUWEDE PABOOST NAMAN NITO, PLEASE?I have always been a constructive critic of President Duterte. Since he…

Jesus said he was sharing the information because Laurio began posting on her blog about Kris’ claims that she was a victim of theft; and that the matter involved his brother, a private citizen.

It was on Jan. 2, 2019 that Laurio published an open letter addressed to Nicko, stating that he approached her on January 2018 “to boost several of my blogs. You asked me to put you as an advertiser in my blog.”

Laurio said she agreed because she could not afford to do it herself. She pointed out that pro-Duterte bloggers were also having their content boosted.

Laurio also shared screenshots of their own exchanges on Facebook messenger, one of which showed Nicko asking her to share a video against charter change.

In another post on the same day, Jesus posted a screenshot of a Viber group called “Resibo Group” created on Jan. 1, 2018. He said it was to prove against Laurio’s claims that Nicko approached her to promote her articles.

A screenshot shared on the same day showed chats between Laurio and Nicko where he boosted posts against Bong Go and James Deakin. The promotion on the James Deakin blog post was set from Jan. 22 to 29, 2018 for P18,000, as per the screenshot.

In the blog post, Laurio attacked Deakin for featuring Bongbong Marcos in one of his videos. After Deakin faced backlash, he defended himself from detractors by stating that he also featured Kris previously — albeit for an advertisement.

Jesus defended his brother, stating that he was an advertiser on the page and not an administrator. He also claimed that it was not in his brother’s interest to smear the likes of Go and Deakin because he was a “business guy.”

Jesus also claimed on the same day that Laurio had removed blog posts involving Kris and Noynoy. Jesus updated the post to state that the blog posts were published again.

Kris held a press conference on Saturday, Jan. 5 with her lawyer Ricky dela Cruz of the Divina Law Firm to air her side against Nicko’s allegations that he received death threats from her.

In the comments section of her Instagram posts yesterday, Jan. 6, she addressed netizens regarding the leaked screenshots whose comments seem to have been deleted.

To one Anne Francisco (@anne_francisco), she asked with regard to destabilization accusations: “You will really believe incomplete screenshots?” 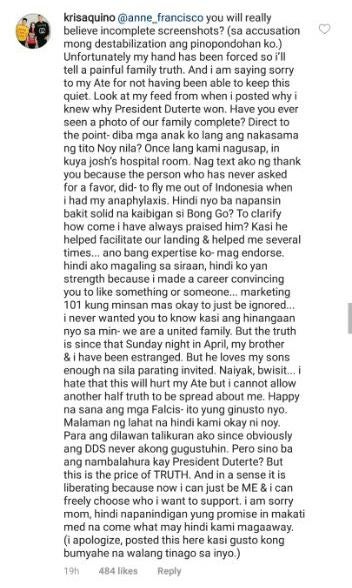 She shared a “painful truth” about her family, which is that she and her brother Noynoy have not been on speaking terms for some time.

“Since Sunday night in April, my brother and I have been estranged. But he loves my sons enough na sila parating (that they are always) invited,” she revealed.

She also bared her “solid” friendship to former Special Assistant to the President Bong Go who had “helped me several times.”

In another comment to Instagram user @stevearaq, she said that she gave funds to Nicko to protect her brother from internet trolls. 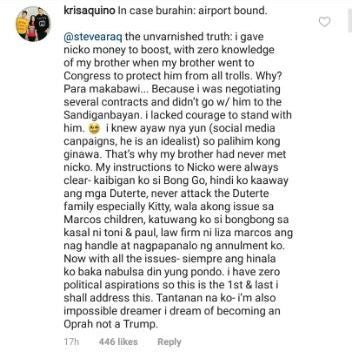 “The unvarnished truth: I gave Nicko money to boost, with zero knowledge of my brother when my brother went to Congress to protect him from all trolls,” she said.

Kris said she wanted to make it up to her brother for failing to accompany him in Sandiganbayan. Last November 2017, Noynoy was charged with graft and usurpation of authority in connection to the 2015 Mamasapano incident.

“I lacked courage to stand with him,” she said.

She said she knew that her brother was opposed to social media campaigns so she launched it behind his back.

She claimed she told Nicko that she is friends with Go, never to attack the Duterte family, and that she has no issues with the Marcos children, including Bongbong Marcos.

She said she also suspects that Nicko pocketed the money meant for boosting posts. However, she did not mention Laurio or whose posts were being promoted.

Finally, Kris reiterated that she has no political aspirations. “I’m also [an] impossible dreamer,” she said. “I dream of becoming an Oprah not a Trump.” JB