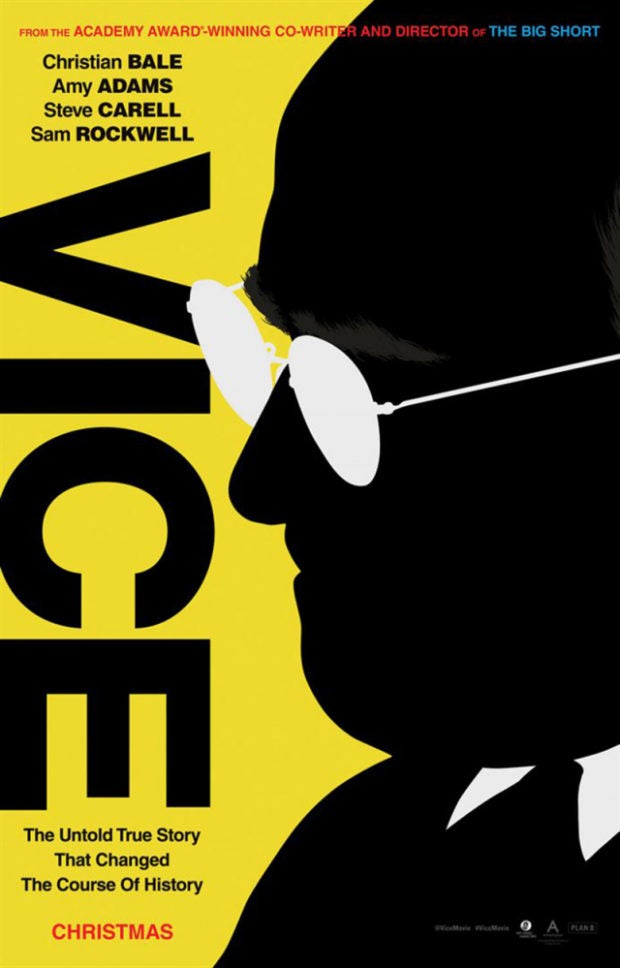 What does it take to be a Vice President? “Vice” examines the singular story of Dick Cheney. Image: Mars Films via AFP Relaxnews

Debuting in US theaters the week of December 25 are two hot awards-season favorites in Vice Presidential biopic “Vice” and Nicole Kidman’s intense thriller “Destroyer”, another true-life story profiling the rise of influential anti-discrimination lawyer Ruth Bader Ginsburg in “On the Basis of Sex”, the Will Ferrell and John C. Reilly comic farce “Holmes & Watson”, and Reilly’s double act with British comedian Steve Coogan, tracing the final tour of a legendary comedy pairing in “Stan & Ollie”.

Dick Cheney goes from ruthless oil company CEO to US Vice President, seeing an opportunity to reshape the role and become the most powerful (and, eventually, generally despised) VP in the nation’s history. An awards-season favorite for its director and a transformed Christian Bale.

The greatest detective, Sherlock Holmes, as a brilliant but comically short-sighted dolt, is accompanied by his even less incisive assistant, Doctor Watson, as they attempt to foil a threat to the Queen’s life. Starring “Step Brothers” leads Will Ferrell (“Anchorman”, “Get Hard”) and John C. Reilly (“Wreck-It Ralph”, “Guardians of the Galaxy”) and directed by Etan Cohen (“Get Hard”).

Ruth Bader Ginsburg, not yet a US Supreme Court Justice but a young law student, teams up with her husband to overturn a century of gender discrimination. Starring Felicity Jones (“Rogue One: A Star Wars Story”, “Like Crazy”) and directed by Mimi Leder (“The Peacemaker”, TV show “The Leftovers”).

How Bale and Amy Adams became the Cheneys in ‘Vice’

Christian Bale’s ‘Vice’ a comedy, not a drama, says director

Read Next
Post Malone drops surprise single ‘Wow’
EDITORS' PICK
Is it safe to talk politics again at family gatherings? ‘The Reconciliation Dinner’ shows us what that’s like
House energy committee chair Arroyo bats for cheap electricity
Pagasa: Warm, sunny Sunday in most parts of PH
vivo’s coming to town to grant wishes with more holiday promos
EDITORIAL: To a bike-friendly future
The Best Tech Gifts For The 2022 Holidays
MOST READ
LOOK: Vhong Navarro transferred to BJMP detention facility in Taguig
The Elephant Man in the Senate
Posh village as ‘shabu’ haven
LOOK: Zanjoe Marudo bonds with Ria Atayde, her family
Don't miss out on the latest news and information.