Mariel de Leon seems to want to distance herself away from the pageant scene based on a statement she recently made on social media. 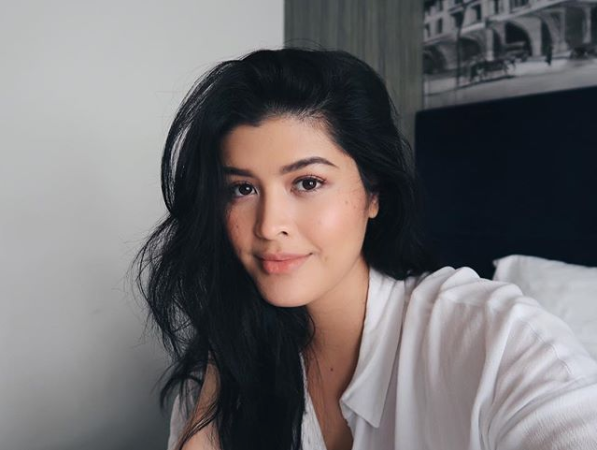 De Leon, who represented the country as Miss International Philippines 2017, explained today, Nov. 28 on her Instagram Stories why she would rather not be called a beauty queen.

“I’d appreciate it if you guys could stop tagging me in pageant posts (especially if it doesn’t even involve me),” she appealed. “I don’t like being called ‘beauty queen’. It means nothing to me. Women are not whatever ‘title’ society chooses to ‘name’ us. Women are so much more than that.”

She stated that while she is grateful for her pageant experience and the opportunities she received from it, she has “closed that chapter in my life.”

“I’m not the type to care about titles, positions, crowns or names. None of that matters to me,” she said. “What matters to me is my family, dogs, art and classical music.” 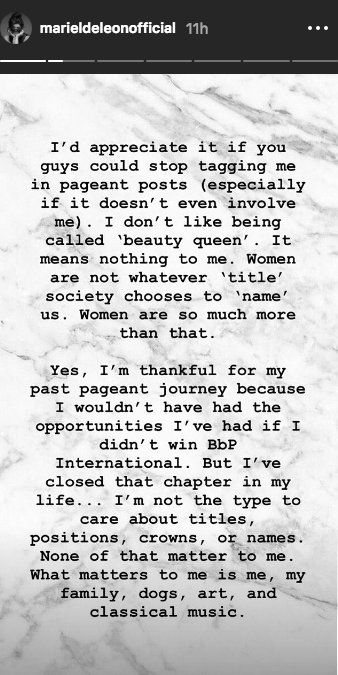 She continued, “I do not want to surround myself with toxic, negative and fake people anymore.” She did not mention if such people were also involved in the pageant industry.

“I like having a simple, quiet and private life — unless I post something on my social media,” she said. “I choose what to show you. You do not see everything in my life.” 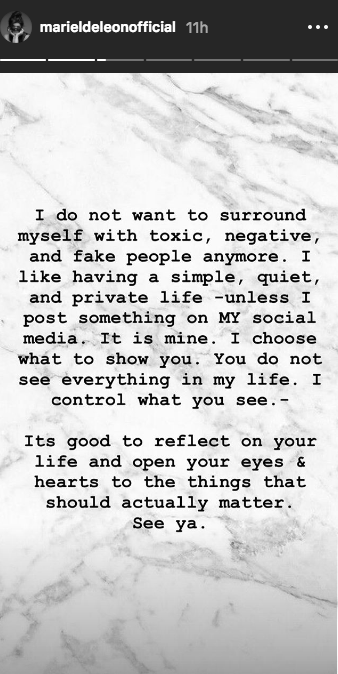 She also wrote on Twitter about some advice she found unsavory on becoming famous: “‘You need a showbiz personality! Dapat maging plastic ka (You should be fake)!’”

“That was actual ‘advice’ someone gave me,” she revealed. “If I have to be that way just to be successful in this industry… Nah. No thanks. I’m out.”

That was actual “advice” someone gave me. If I have to be that way just to be successful in this industry… Nah. No thanks. I’m out.

“Never sacrifice or change your true self just to be ‘liked’ or to be ‘famous’. It’s not worth it,” she said in another tweet.

De Leon, the daughter of veteran actors Christopher de Leon and Sandy Andolong, is known to speak her mind on various issues, at times getting heat for her candor.

Aside from her international pageant experience, she has also ventured into acting, starring in the 2017 action film “Ang Panday” opposite Coco Martin. JB