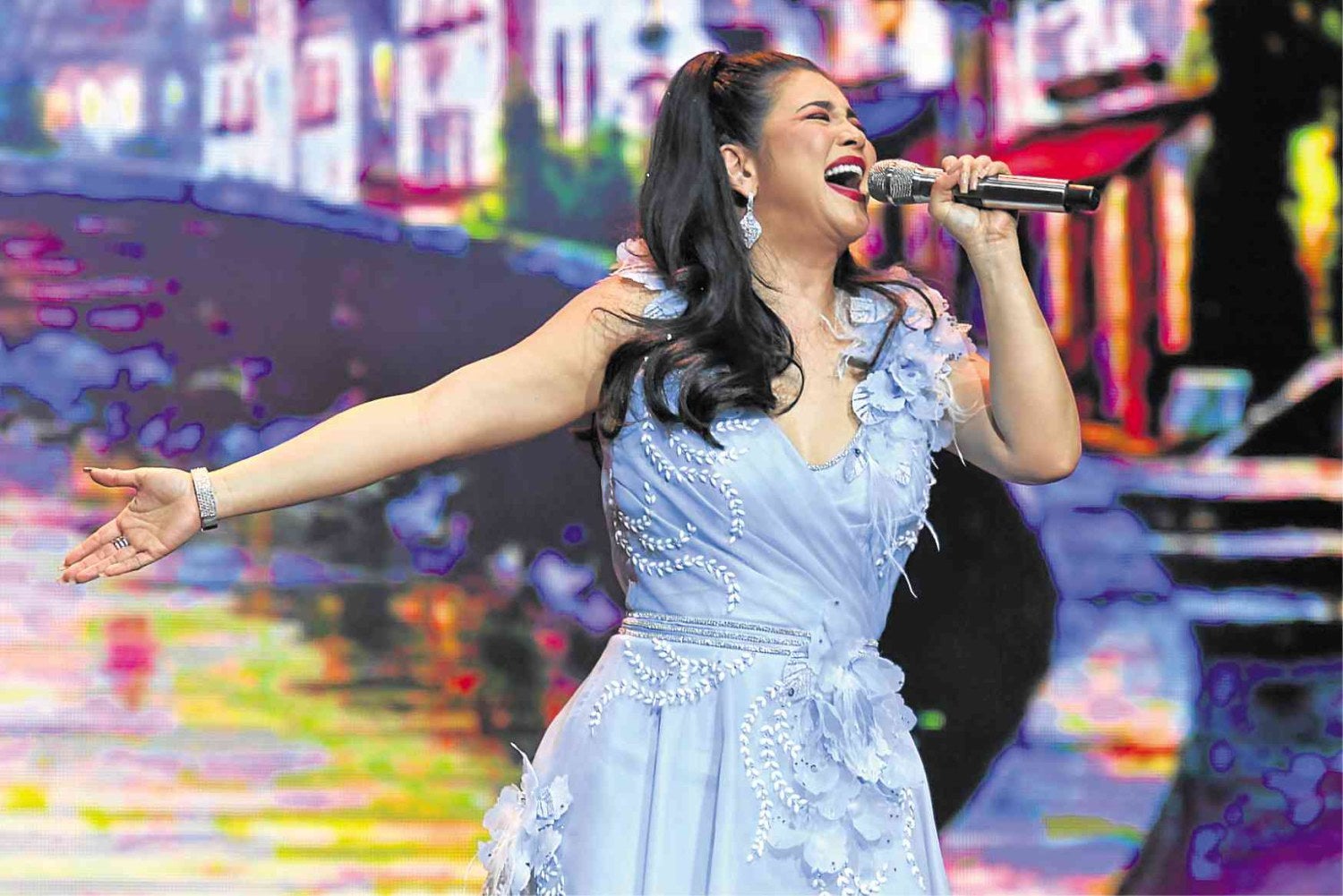 Regine Velasquez prudently took her time in the opener, “I Will Always Love You.”

After holding the last note of “Never Too Far,” the obstacle course of a ballad by Mariah Carey from the movie “Glitter,” Regine Velasquez broke into a smile, stuck her tongue out and heaved a sigh of relief.

“I haven’t done that song in a very long time,” she said from the New Frontier Theater stage on the first of three nights of her “Regine at the Movies” concert series. “I didn’t think I could still sing it!”

If there was one good thing that could be gleaned from the mercurial temperament of Regine’s voice these days, it is that it has somehow brought out in her a renewed sense of enthusiasm that was most apparent after getting through a demanding piece. 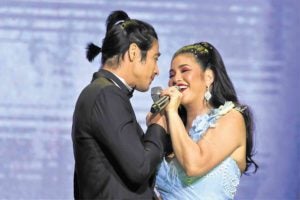 In her prime, it wasn’t unusual to see the singer looking rather blasé after making superhuman vocal feats look as easy as breathing.

This time, there was a giddiness that was almost childlike. “You know what, to be honest with you, I was feeling nervous tonight, because I didn’t know what the condition of my voice would be like,” she said, giggling. “But thank you, Lord.”

And she was indeed in fine form throughout the show, as she took on a selection of theme songs from movies old and new, local and foreign, popular and obscure.

Regine prudently took her time in the opener, “I Will Always Love You” (from “The Bodyguard”), which she started off a cappella. Her middle belts were easy and clear in “For Your Eyes Only”; rich, dramatic and with an emphasis on vibrato in “Diamonds are Forever.” “Only Hope” (“A Walk to Remember”), on the other hand, was spiritual. 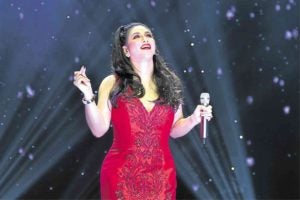 Her diehard fans have always been supportive and appreciative of her talent—but even more so these days. They hollered and cheered and clapped whenever they saw fit. And at some point, Regine had to teasingly shush the eager crowd—like a disgruntled viewer trying to quell the murmur of her fellow cinemagoers—just so she could start the song.

“Ilabas niyo na ngayon lahat ’yan … Ano, OK na kayo?” jested the seasoned singer-actress, who also reminisced about how she got her start in the movies.

Regine recalled her amusement over the 1988 Metro Manila Film Festival entry “Pik Pak Boom” winning best float, and her excitement over landing her very first lead role in “Wanted Perfect Mother.” She then asked her guest, Piolo Pascual, to join her onstage for a duet on “Paano Kita Iibigin,” which is also the title of their 2007 romantic drama.

Occasionally, the rasp she developed due to acid reflux would creep in—especially when going for extreme upper belts or when sustaining notes—but she more than managed to keep it largely at bay. The show-stopping jolts of high notes were there, albeit delivered without that abandon she used to have. In “I Don’t Want to Miss a Thing,” for instance, she took a strategic pause before hitting the glory note. But she hit it all the same.

Still, in key moments of the concert, Regine made sure to remind everyone of what she was capable of, and why she’s one of the country’s most influential vocalists. Her medley of “Moon River,” “Two for the Road” and “From Moment to Moment” by Henry Mancini was controlled, poignant and whimsical, showing that she need not do too much to captivate.

“I’ll Never Love Again” (“A Star is Born”) was a musical storytelling, which had Regine taking the audience into a roller-coaster ride of emotions. She started off soft and vulnerable. But when the music began to swell, the whispers turned into pained growls; her belts sounded as if she was on the verge of crying.

“Tagpuan” (“Kasal”), which prompted a standing ovation, was another highlight. The song was rendered languidly, but not tentatively, and was every bit as nuanced and impassioned as “I’ll Never Love.” Even Regine herself was reduced to tears. And with such performances, she only proved that even when she’s not at the peak of her powers, she can still sing circles around most singers.