‘Symphony for Our World’ fuses music with images | Inquirer Entertainment

‘Symphony for Our World’ harmonizes music with images

Music and images of nature come together in National Geographic’s “Symphony for Our World” on Nov. 30 — with shows starting at 3 p.m. and at 8 p.m. — at the Solaire Theater.

With the combination of dynamic orchestral and choral work, “Symphony for our World” will showcase National Geographic’s iconic images taken over the past 130 years.

The spectacular show will be performed by the ABS-CBN Philharmonic Orchestra under the baton of Gerard Salonga and the Ateneo Chamber Singers. The ABS-CBN Philharmonic Orchestra rehearses for National Geographic’s “Symphony of Our World.”

Beyond the visuals paired with music, the show also carries an advocacy on the conservation and preservation of the environment.

“The highlight is the message of the documentary — preservation and awareness. It’s to make everyone aware of diverse life that exists on the planet,” Salonga said during the concert’s media conference on Wednesday. 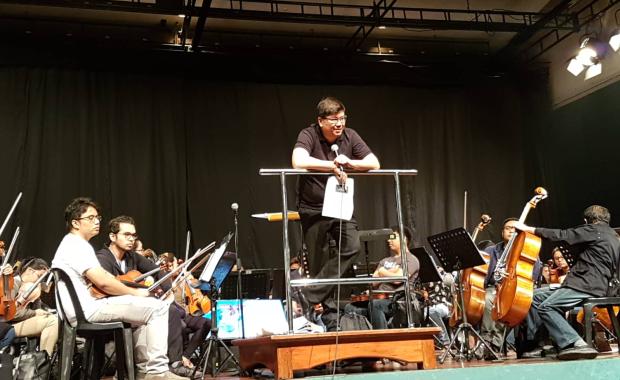 Gerard Salonga will conduct the ABS-CBN Philharmonic Orchestra in its performance of National Geographic’s “Symphony for Our World.”

The goal is to urge people to “actively participate in the conservation and preservation of all the species that we have on our planet,” he said.

Aside from the show’s advocacy, Salonga said the concert would give audiences a new experience of images of nature with an orchestral accompaniment.

Composed by Emmy- and BAFTA-nominated Bleeding Fingers Music composers Austin Fray and Andrew Christie, Salonga said: “The music is there to push the audience over the edge.”

“Symphony of our World,” a project of National Geographic and Jason Michael Paul Entertainment, has been performed in many cities around the globe since April this year. /atm