“Legendary” is a hard-won adjective. But by the time she was killed six years ago in Homs, Syria, by President Bashar Assad’s forces, Marie Colvin had earned it. At 56, she had already long been revered among fellow journalists for her bravery and determination to tell the story, at virtually any cost. 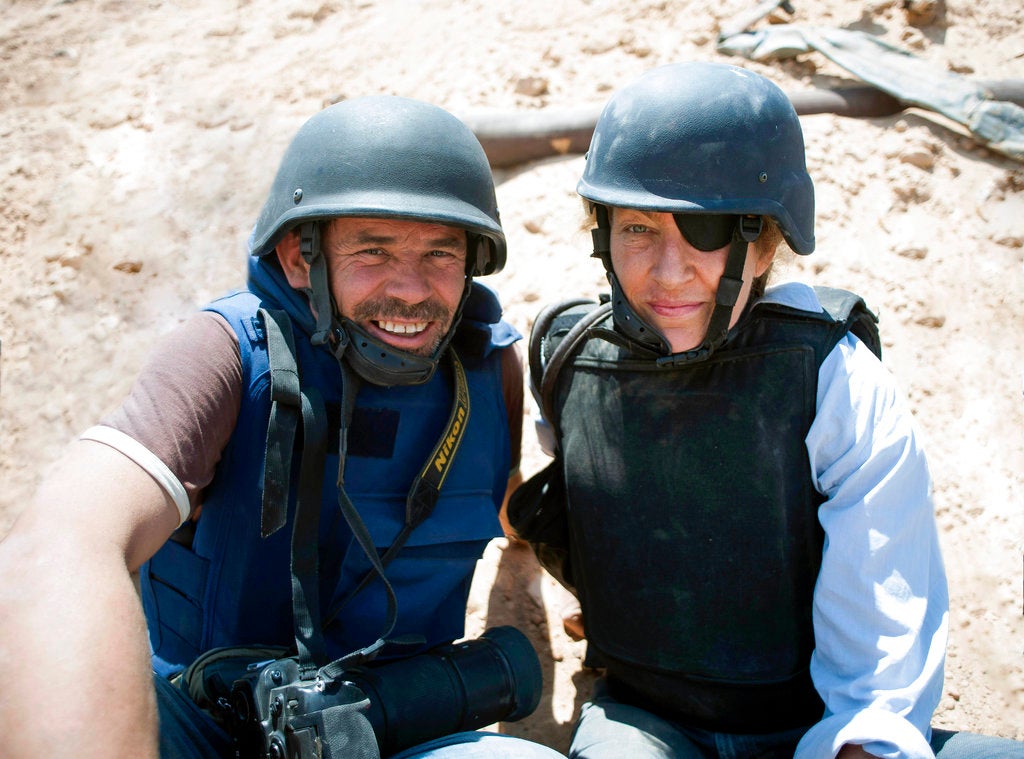 This image released by Arrow Media shows photographer Paul Conroy, left, with war correspondent Marie Colvin in Misrata, Libya. A new documentary recounts in searing detail the final days of Colvin, who was killed in shelling from Syrian President Bashar Assad’s forces in 2012 in the city of Homs, where she was documenting civilian suffering. Image: Paul Conroy/Arrow Media via AP

The New York native who wrote for Britain’s Sunday Times was also known for some other things: For her trademark black eye patch, adopted after she lost sight in one eye in a Sri Lanka grenade attack. For her taste in vodka martinis and pearls. For her famous parties. And for being a notoriously prickly person to work with, especially for photographers, whom she cycled through as quickly as the cigarettes she was constantly smoking.

But Colvin found her professional soul mate, and her final journalistic partner, in Paul Conroy, a freelance photographer and former British soldier who was with her when she died in Homs, and badly wounded himself. Conroy has never stopped telling Colvin’s story, and now he’s telling it in a searing new documentary, “Under the Wire,” an account of their last, tragic assignment.

In a striking coincidence, “Under the Wire,” directed by Chris Martin and based on Conroy’s own book, is one of three major projects about Colvin released within a few weeks. They include the feature film “A Private War,” offering a take-no-prisoners performance by Rosamund Pike, and a new book, “In Extremis: The Life and Death of the War Correspondent Marie Colvin,” by her friend Lindsey Hilsum.

What would Colvin think of all the sudden attention? Conroy, who also served as a consultant to “A Private War,” chuckles to think of it, saying that outwardly she’d brush it off, but inwardly she’d likely be proud — and happy that the attention is bringing the plight of the Syrian people back into the spotlight.

“It’s the best lifetime achievement award we could give Marie,” he said in a recent interview from his home in Devon, England, adding: “It’s very hard to describe your friend as a legend, but you have to with Marie. She was a complete and utter one-off.”

While “A Private War” is justifiably drawing Oscar buzz for Pike, “Under the Wire” has Colvin herself. Director Martin spent years assembling archive footage, including Conroy’s own, and everything else he could find. The result is a stunningly immediate account of the tragedy, including audio from the moment the missiles hit.

It begins with Colvin and Conroy’s decision to sneak into Syria in February 2012. To protests of her friends that it was just too risky, Colvin replied, according to Hilsum: “It’s what we do.”

The duo traveled over land from Lebanon into Syria, then made a terrifying journey to Homs through an underground water tunnel. Their destination: the working-class neighborhood of Baba Amr, where starving civilians were being bombarded by constant shelling.

Colvin and Conroy documented the suffering, including a Feb. 19 piece on the “widows’ basement,” a cellar where mostly women and children crowded in misery, sheltering from the bombs. It was, says her editor, Sean Ryan, her very best work.

The pair left Homs at one point but Colvin insisted they go back; there was more reporting to be done. Back in the tunnel, Conroy says he stopped and told her: “Marie, I have a bad feeling.” She told him she was going back, regardless. He joined her. “I went in with my eyes open,” he says now.

Despite the unimaginable risks, Martin takes pains to note that Colvin wasn’t foolhardy.

“The cliche is that she was a ‘fearless’ war reporter,” the director said in an interview. “But what I got very clearly from talking to people was that she wasn’t fearless. She was frightened all the time. Her achievement was that she overcame it.”

The film also makes a point of showing her fiercely competitive nature. When a group of French journalists arrives, just as Colvin’s own editor is begging her to leave, Colvin digs in her heels. “It was her story and she wanted it,” Martin says simply.

The most heartbreaking scene — in both the dramatic film and the documentary, actually — takes place in a makeshift medical clinic in Baba Amr. A badly wounded baby boy arrives; doctors cannot save him. By terrible coincidence, his own grandmother is working in the clinic and begins to wail as she recognizes the baby.

After witnessing the horrifying death, Colvin decides to go for broke. She broadcasts from Homs, describing watching the baby die in interviews on the BBC and CNN. “She was going to take the story and go for it, whatever the cost,” Conroy says.

Only hours later, missiles rained down on the makeshift media center in which Colvin was filing. She and French war photographer Remy Ochlik were killed instantly. Conroy and French reporter Edith Bouvier were wounded. There is shocking footage here of the wounded journalists, including of Conroy’s mangled leg. “I need a tourniquet!” he screams.

The film goes on to document Conroy’s harrowing escape from Homs, literally clawing his way out through mud. “I got out of the tunnel, and four minutes later the government fired rockets,” he says now. “The guys who carried me were all killed.”

Both Conroy and Martin say they could never have known how relevant their film would be, six years after Homs. That’s because they didn’t know journalism itself would come under fire.

“In this day and age, journalism as a profession is under such attack from the whole ‘fake news’ thing,” Conroy says. “So to stand there and say, ‘This is someone who lived to bear witness’ — that was Marie. She died living that work.”

Or, as Colvin herself is shown saying in the film, being a war correspondent was not about which tank was used or which type of weaponry. She didn’t care a whit about that stuff.

“Being a war correspondent is about people, and what they’re going through,” she says.

Conroy says he will tell the story of Colvin, and of the Syrian people, until their suffering is over.

“To this day I carry this weight and responsibility,” he says. “I’m not going to stop.” NVG