Michael Douglas on being cancer-free, finally getting a star on Walk of Fame 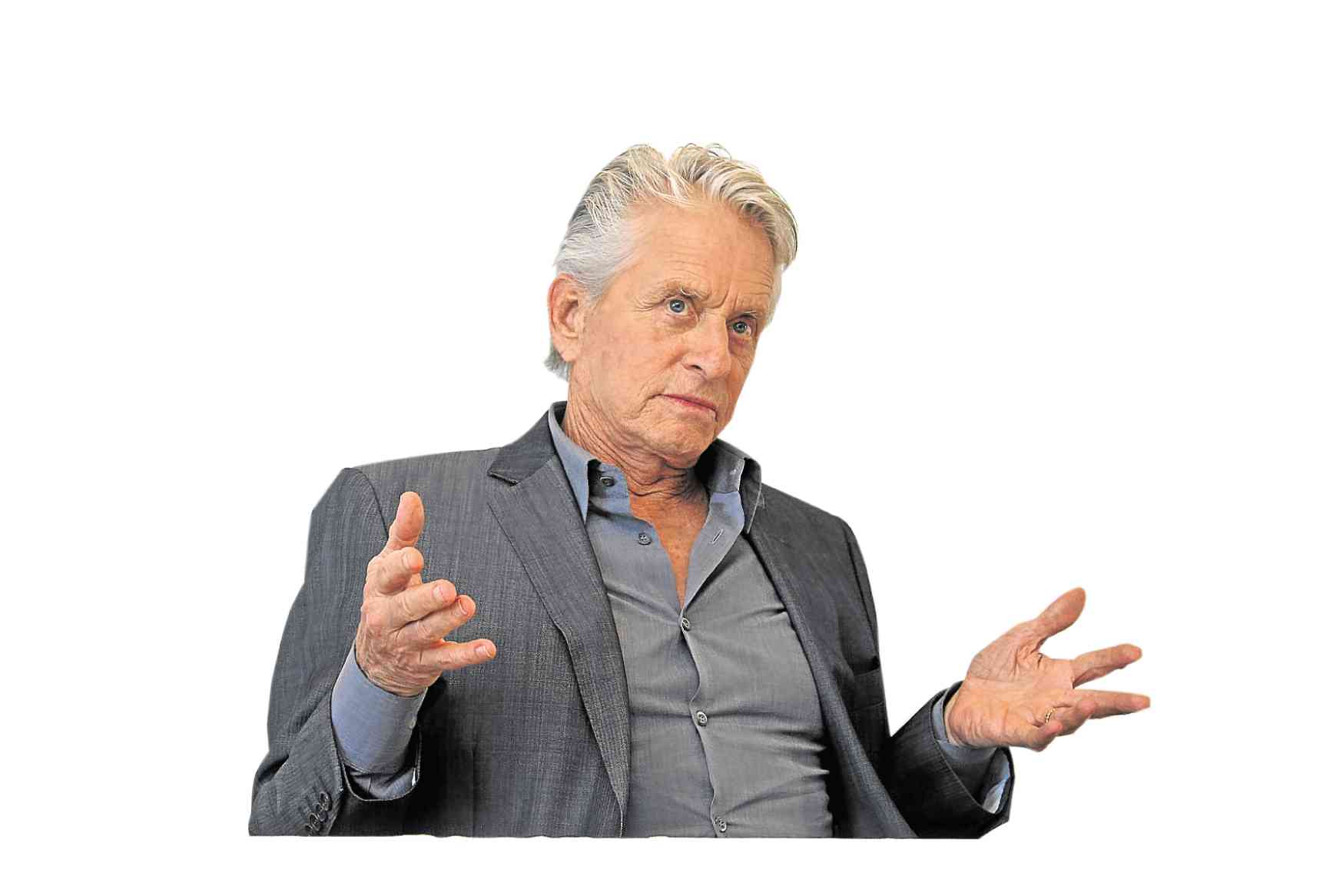 LOS ANGELES—At 74, Michael Douglas has survived a battle with throat cancer, finally got his star on Hollywood’s Walk of Fame, became a grandpa and stars in a new Netflix comedy series, “The Kominsky Method.”

Just two days after being honored with a star with several generations of Douglases present—dad Kirk (101 years old), wife Catherine Zeta-Jones, sons Cameron (his son with ex-wife Diandra Luker) and Dylan and daughter Carys–Michael sat down for an interview.

In the new Netflix comedy series, “The Kominsky Method,” Michael Douglas costars with Alan Arkin. He plays Sandy Kominsky, an actor who’s had his brush with fame and is now toiling as an acting coach. Chuck Lorre, the iconic writer-producer known as the King of Sitcoms behind shows like “The Big Bang Theory” and “Two and a Half Men,” is the creator. 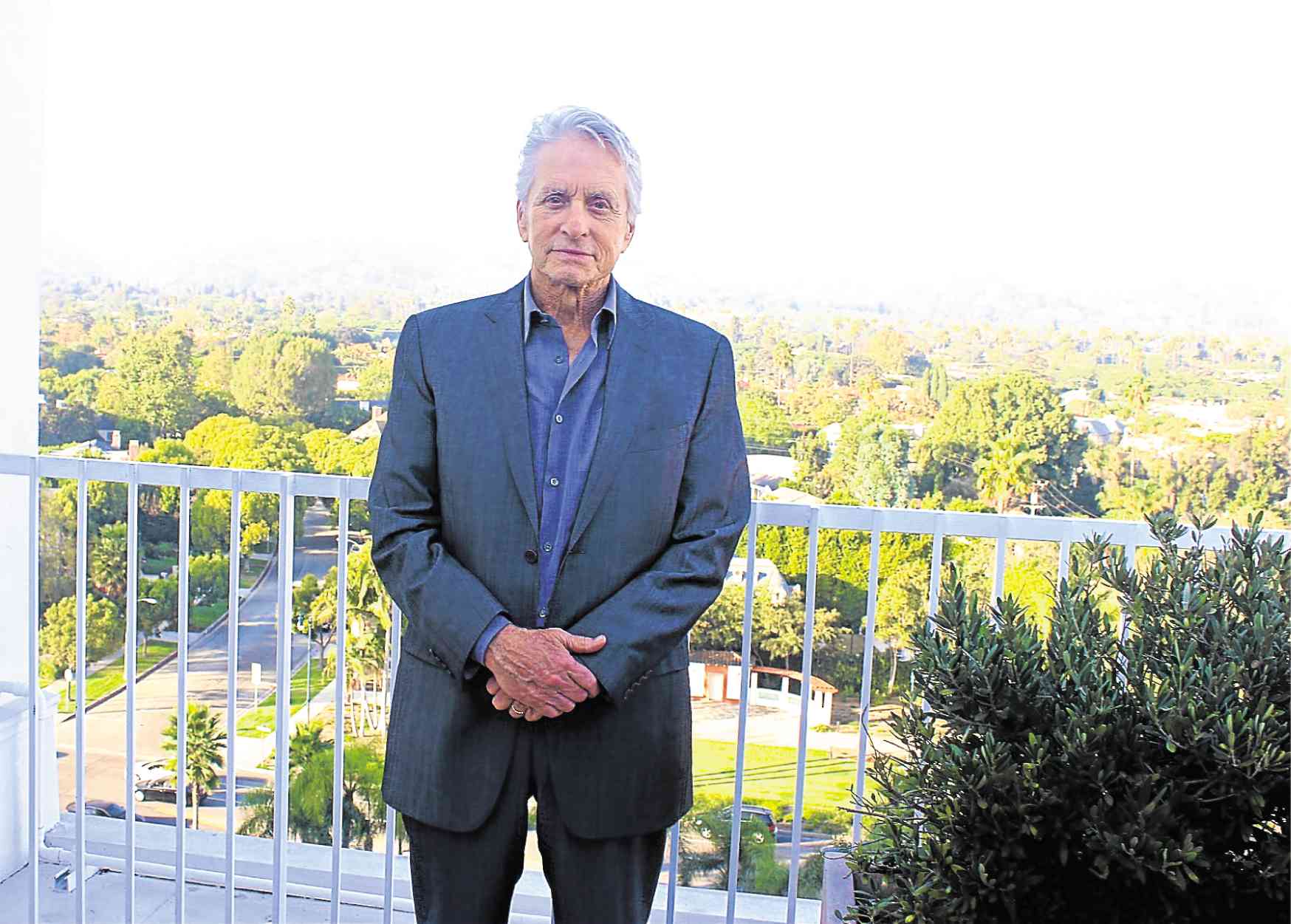 Excerpts from our chat in the Beverly Hilton Hotel’s rooftop Stardust Penthouse:

What did it feel like to finally get your star star on the Hollywood Walk of fame? People ask, “Why were you so late for a star?” But I live in the East Coast and the timing just wasn’t such.  Alan [Arkin] and I were talking and we realized, my God, this is my 50th year in the biz. And I have “The Kominsky Method” coming out so this should be a great time.

I was happy to have Kirk sitting there, looking at me and saying, “No son of mine has been in the business for 50 years (laughs).” But he was there and Catherine was there. My oldest boy Cameron was there—he had his share of adversities [he spent several years in prison for drug charges], and he’s doing well. He recently made me a grandfather.

A lot of old friends were there. So it was nice and touching. They were very sweet because I gather that they put me just six stars away from Kirk’s star.

How did you and Catherine celebrate? Catherine was excited and happy. We are of a 25-year age difference, so she is a little bit more in the future. We had a party across the street at Hollywood and Vine afterward. It was like an alumni meeting with a lot of old directors.  Andy Garcia came on by and a few other people, including producers.

And how are you, health-wise? Cancer-free.  I am seven years out, and I get checked every year.  I had a little question a couple of years ago with a tumor, which was benign and it was removed. I feel very good.

And how does it feel to have a grandchild? Lua is her name and Viviana [Thibes], her mom, is from Brazil. Lua is a Portuguese name.  It’s hard to believe [that I am a grandfather]. I knew that day was going to come sometime. I still have my daughter in the house, Carys.  A lot of times, when you are an empty nester, you are so excited to get your grandchild. But I still have Carys, who is 15.

It’s a wonderful feeling. What I was also thinking about is that all my three kids, Cameron, Dylan and Carys, want to be actors, as well as my niece Kelsey.  So there are four [acting] Douglases in the next generation.  Dad and I cover about 120 years and about 120 to 130 films in this time.

So, for him and for me, this sense of immortality—a continuity of generations going on—is special. 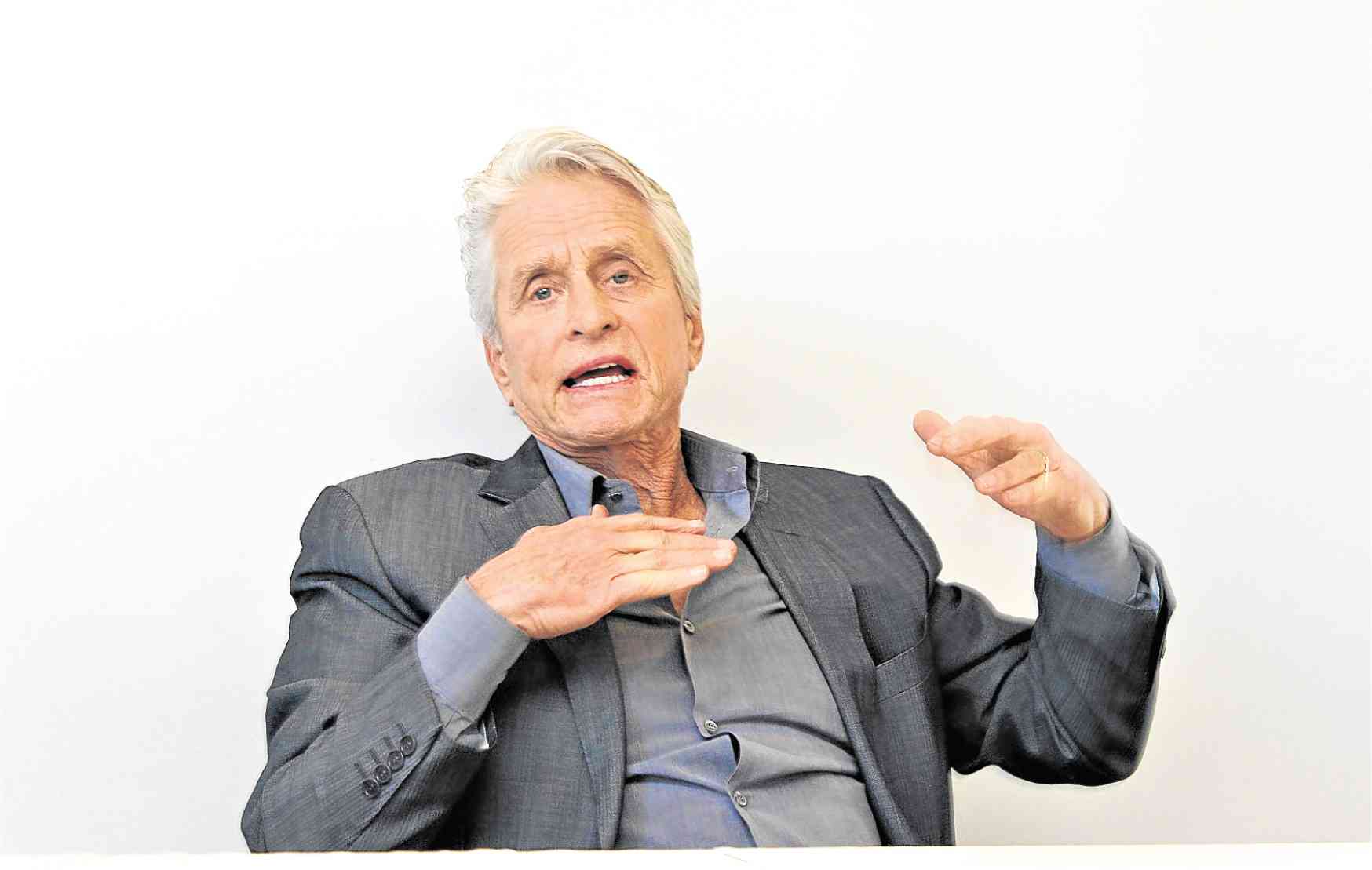 What’s it like for you and Catherine to still be raising a teenager in your home? Carys is doing really good. Catherine is a wonderful mom.  Carys is a solid girl, a great student, very pretty, a great figure . . . This is how sweet Carys is—she called and wanted to check to make sure it was OK for her to go on a date with a guy after school who is 17 and he’s got a car. I said, yeah OK.

That is how good she is.

As you know, Cameron has had a difficult time, but he is doing great. And both Carys and Dylan are going to have to do a lot of damage before I get mad. They have been great students. Dylan is off to college now, and Carys has a big career ahead of her. She’s a wonderful singer, plays the piano, very pretty.

What did you pick up from hanging out with your dad on his movie sets? The biggest advantage of being second generation is that when you start acting yourself, you have grown up and you have seen your dad with Tony Curtis, Frank Sinatra and Gregory Peck at home. You have seen their insecurities and what they worry about. You see them as real people, and it helps you to have a better understanding of the business, and you handle it better.

In one of the first movie sets I was on, I was 12 years old. My father was making “The Bad and the Beautiful” with Lana Turner. I came in and it was a dark set. I walked onto the set very quietly and my father was right in the middle of this big love scene with Lana Turner.

What is the word on “Ratched,” a web TV spinoff of Louise Fletcher’s unforgettable Nurse Ratched character in the movie, “One Flew Over the Cuckoo’s Nest”? My company found the script. We went to Ryan Murphy and he fell for it. We thought that he is probably the best person to do it with. It’s a prequel, a lead up to how Nurse Ratched became the person that she is. Sarah Paulson is playing her. She is a very good actress and already committed to the part.

Do you have friendships that have endured, like the one your character has in “The Kominsky Method” with Alan Arkin’s character? Or friendships along the lines of “Thelma & Louise”? Danny DeVito. I have been friends with him since 1967-1968. We were roommates in New York. I felt like “Thelma & Louise” driving with Danny in New York City. It was one of the most harrowing things I ever remember.  I remember he used to drive cars . . . he was a great driver. So we are still buddies. I have been fortunate enough to hang on to most friends.  I have some college friends that I still keep close with.

That was wonderful experience (on the original TV series version). I was so fortunate and Karl was the mentor of my life. He took me under his wing and he had a long history with a lot of famous actors like Marlon Brando who worked with him on films.

The positive aspect is, you choose much more how you spend your time rather than letting life hit you and go with the flow.

Catherine and the kids always tease me. I am looking up three months, six months ahead for a holiday and what are we going to do?

How have your acting skills improved with time? I feel a definite advantage of being older and taking my time. I am somebody who is sometimes fearful of pauses. One of the reasons I was happy to work with Alan and Chuck is to learn about timing, pace, pauses, what can be done. I tend to keep the momentum up. I am learning a little more about how to be more vulnerable in that time, to be a little more selfish.  And that if they have a problem, they can fix it in editing.  That part is good.

Memory is tough. Memorizing lines now takes longer. I don’t like that anxious feeling of feeling like you don’t have it locked in. It takes a longer amount of time. But hey, I am 74, man! What kind of jobs do you have?

In “The Kominsky Method,” we see certain issues when people don’t think about leaving a will. It’s a good question and I have to think about that. I haven’t gotten to that point yet. I will.

I am thinking about taking care of basic issues, as to how much my estate goes to charity versus what I give to support my kids going on, knowing that there’s going to be a difficult world ahead.

Some people specify in their wills how the families they left behind will honor them. I am not going to be honored, I am going to be ashes (laughs).

Read Next
Dingdong-Dennis starrer to be pitted vs Coco’s top-rated series
EDITORS' PICK
Leveling up your ‘lutong bahay’ with the kitchen companion you never knew you needed
SM prepares for ‘safe malling’
Notice of 2020 regular meeting of stockholders June 18, 2020
LIST: What to expect in areas under GCQ, MGCQ
Drilon wants repeal of penal provisions in proposed Bayanihan extension law
DOTr bares 2 phases of public transport revival in GCQ areas
MOST READ
LIST: What to expect in areas under GCQ, MGCQ
Hong Kong loses US ‘special status’ — what next?
Duterte approves Metro Manila’s shift to GCQ starting June 1
Bocaue Mayor Joni Villanueva passes away, Sen. Villanueva confirms
Don't miss out on the latest news and information.

TAGS: Michael Douglas, Netflix, Only In Hollywood, The Kominsky Method, Walk of Fame