Barbie Imperial seems to be revealing the real score between her and actor JM de Guzman.

The two starred as May-December romantic interests in the TV series “Araw Gabi” and their chemistry on and off the screen have made fans root for “JuanBie” to become a real-life couple. The show aired from April to October 2018.

Last Nov. 9, Imperial, 20, shared in a now-deleted Instagram post that she received a stuffed pink teddy bear, flowers and a letter from the 30-year-old actor. On the letter’s envelope was the word “Love.”

(Long-distance relationship be like… huh? Hehe thank you @1migueldeguzman. Just a bit more! Come back to Manila.)

Based on his social media posts, De Guzman is in Boracay for a project with actress Arci Muñoz.

Imperial read the contents of the note in ABS-CBN’s livestream Kapamilya Chat. After opening it, she commented, “Bakit di mo ko tinetext (Why don’t you text me)?”

After being repeatedly prompted, she read a portion of the letter aloud: “Dearest Love, I’ll go against the world just to win your heart. I’m willing to sacrifice a lot just to win you. I love you with all my heart. I’m sorry.” Besides the letter, a card could be seen in the envelope, though she did not reveal what it said. 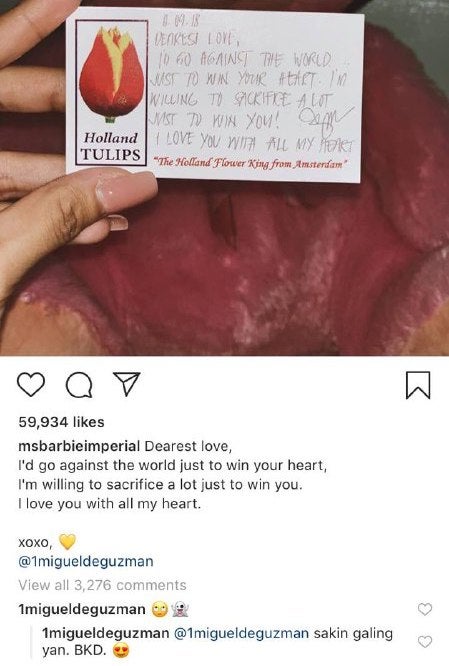 Fans of the love team were visibly thrilled and urged her not to delete the post as she did before.

De Guzman replied to her post with an eye-roll and ghost emoji. He also commented, “Sakin yan galing. (That’s from me.) BKD [heart-eyes emoji]”

Of their relationship, De Guzman denied that he and his co-star were caught kissing in his car when he would drive her home, the Philippine Entertainment Portal reported on Nov. 8. He also said they weren’t an item yet.

Imperial said last August on “Tonight with Boy Abunda” said that she would give De Guzman a chance if he courted her.