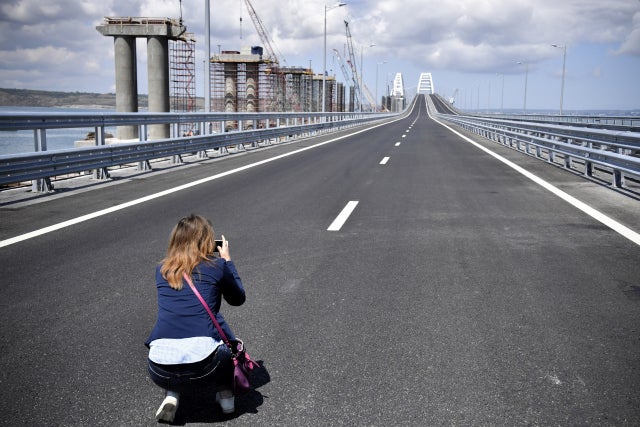 In this file photo taken on May 15, 2018 a woman takes a picture prior to the opening ceremony of the 19 km road-and-rail Crimean Bridge passing over the Kerch Straits and linking southern Russia to the Crimean peninsula in Kerch. Image: Alexander NEMENOV / POOL / AFP

A new bridge linking annexed Crimea to the Russian mainland is the unlikely backdrop to a lush state-funded rom-com that has been compared to Soviet propaganda and panned by critics.

The sexually charged “Crimean Bridge: Made with Love!”, which opened in Russian theaters last week, was penned by Margarita Simonyan, head of the Kremlin-owned news channel RT.

The film, set during the construction of a $3.7-billion bridge that opened in May to condemnation from the West, focuses on the adventures of a nubile young archaeologist.

She finds herself pursued by a PR man who has come from Moscow to oversee media coverage of the bridge, as well as by a builder who in one climactic scene lands a plane on the structure itself.

But KinoPoisk, one such Russian aggregator, insists the reactions are real.

“This film turns out to be a strange hybrid of ‘Crimea’ and ‘American Pie’,” wrote Egor Belikov for the cultural guide Afisha.

“The bridge is like an iron phallus, now and forever inserted by the Motherland into the body of this newly acquired peninsula,” he said.

Critic Anton Dolin also panned the film but said the creators had at least managed to come up with a new genre, the “romantic-patriotic comedy”.

Writing for the Meduza news site, he said the movie was “a rather weird time machine” transporting the viewer to the construction-based Soviet propaganda pictures of the 1930s.

“It’s a pale imitation of Soviet propaganda efforts, but the Soviet state had the monopoly on both what viewers could see and what actors or directors could make,” political scientist Ekaterina Schulmann told AFP.

She said sales would likely be boosted by children and students in state institutions being brought to the film en masse.

“That’s how commercial results are achieved. But the sales are not the point — the point is to say that so many people have watched this production and to manufacture some signs of success.”

The film has taken a total of around 44 million rubles ($667,000) since the end of last week, according to federal listings. Russian media reported a budget of 300 million rubles ($4.5 million).

Moscow’s annexation of Crimea from Ukraine in 2014, following an anti-Russian uprising in Kiev, was widely popular at home but provoked outrage abroad and sanctions from the E.U. and U.S.

The film has also been criticized for its depiction of Crimean Tatars, a minority group persecuted under Stalin and under increasing pressure since Moscow returned to the peninsula.

Some viewers, however, said they simply enjoyed the sun-soaked romance.

“We are not obliged to listen to your loud, depressive nonsense,” Russian author Igor Maltsev wrote of opposition critics of the film on his Facebook page.

“Normal people will go to watch a funny, good film about summer and love.” NVG