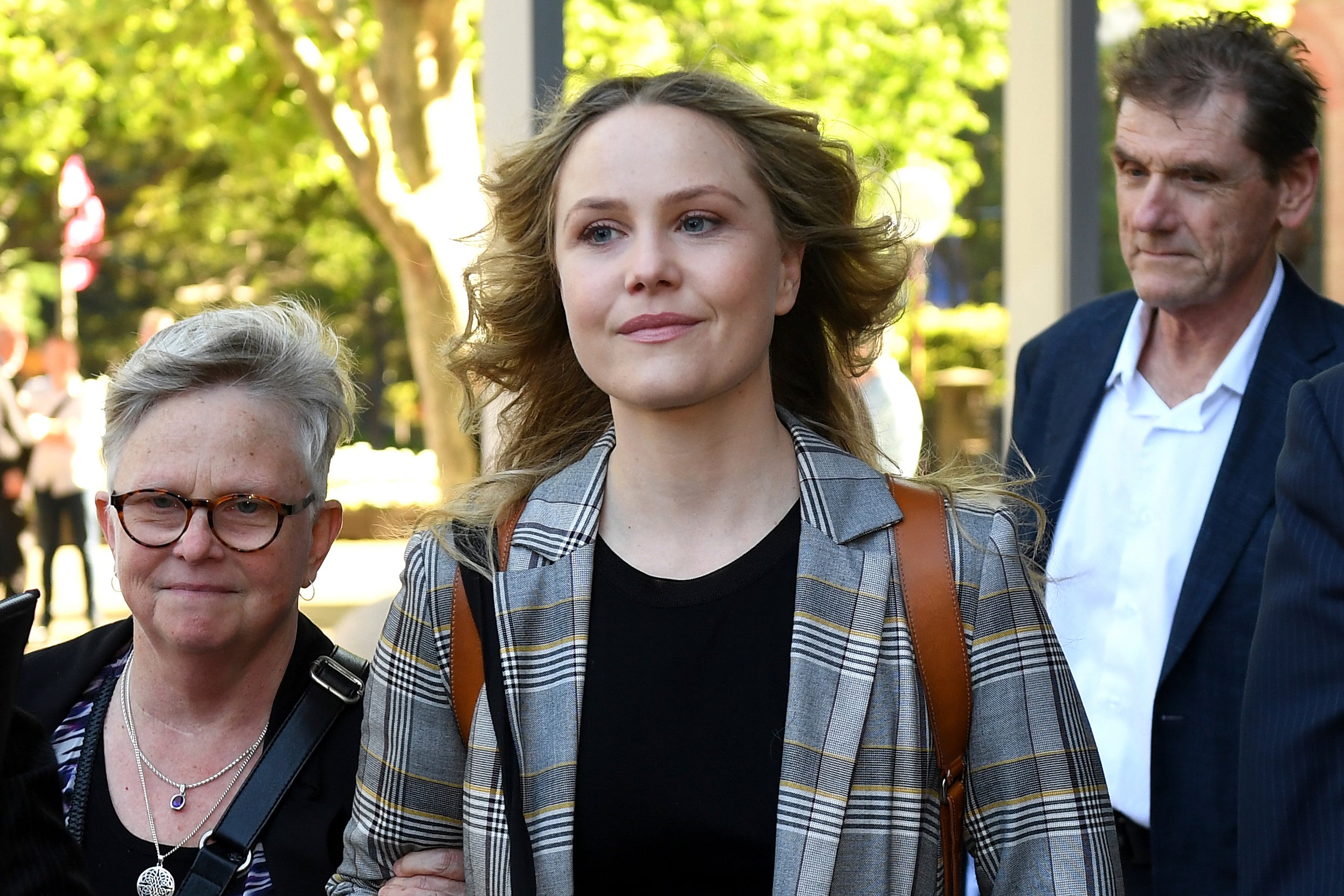 Actress Eryn Jean Norvill, center, leaves the Federal Court in Sydney, Australia, Tuesday, Oct. 30, 2018, after giving evidence during a defamation trial brought on by fellow actor Geoffrey Rush. Rush is suing the publisher of Sydney’s The Daily Telegraph newspaper for defamation over articles that accused the 67-year-old Australian actor of behaving inappropriately toward Norvill during the Sydney Theatre Company’s production of “King Lear” in 2015 and 2016. Image: Dan Himbrechts/AAP Image via AP

SYDNEY (AP) — The actress at the center of Oscar-winning actor Geoffrey Rush’s defamation trial told a Sydney court on Tuesday that he deliberately touched the side of her breast in a Shakespearean stage scene in which her character lay dead on the ground.

Rush is suing the publisher of Sydney’s The Daily Telegraph newspaper in the Federal Court for defamation over articles published in November that accused the 67-year-old Australian actor of behaving inappropriately toward actress Eryn Jean Norvill during the Sydney Theatre Company’s production of “King Lear” in 2015 and 2016.

Rush denies the claims against him and argues the articles portrayed him as a pervert and a sexual predator.

Norvill never spoke to the newspaper before the articles were published and made her first public allegations against Rush during her testimony in court on Tuesday.

The 34-year-old actress testified that she was playing King Lear’s dead daughter Cordelia when Rush, playing the distraught father, stroked his hand across the side of her right breast and on to her hip during a preview performance.

She said it hadn’t happened before, with Rush usually touching her face and sometimes her head, shoulder and arm during the scene.

“It couldn’t have been an accident because it was slow and pressured,” she told the court.

During his testimony last week, Rush denied deliberately touching Norvill’s breast, touching her lower back under her shirt when they were backstage or making lewd gestures and comments toward her.

He became emotional when he said that in the scene where Norvill’s character died, he imagined she was his “own real-life daughter and she’d been hit by a bus on the street where we live.”

While rehearsing the scene with her eyes closed, Norvill told the court she felt shocked, belittled and embarrassed on realizing that Rush was making “groping” gestures over her body to the tittering laughter of a “complicit” rehearsal room.

Rush was bulging his eyes, licking his lips and smiling as he made the gestures, Norvill told the court.

Norvill, who said she had longed to work with Rush before the production, said his allegedly lewd gestures and sexual innuendo became normalized in rehearsals, but she didn’t complain because “his power was intimidating.”

Several times while waiting to walk on stage, Rush brushed his fingers against hers and traced them on the palm of her hand, she said.

Norvill said once when he stroked her lower back, her “panic levels shot up” and she felt “unsafe and probably sad … because I think Geoffrey’s idea of friendship was different to mine.”

She said she “100 percent” disagreed that her claim of sexual harassment by Rush was a “complete lie.”

McClintock also put to Norvill that she had made up an allegation about director Neil Armfield telling Rush his touching her during the death scene was becoming “creepy” and “unclear.”

Armfield told the trial last week he had no memory of making the comment and denied using the word “creepy.”

McClintock questioned her over an exchange of nickname messages in 2014 when she referred to Rush as “God of Generic Lust,” ”Jersey Cream Filled Puff” and “Galapagos Lusty Thrust.”

When the lawyer suggested Rush was just continuing what Norvill had done in those messages by writing in 2016 that he thought about her “more than is socially appropriate,” she replied, “I hadn’t spent months sexually harassing him.”

Norvill agreed that an email she sent Rush during the final days of “King Lear” read as “quite loving,” but said she was just trying to “keep it normal” and was not being sincere.

The non-jury trial before Judge Michael Wigney is to continue Wednesday.

Rush won the best actor Oscar in 1996 for his portrayal of pianist David Helfgott in “Shine” and was nominated for roles in “Shakespeare In Love,” ”Quills” and “The King’s Speech.” He is also famed for his portrayal of Captain Barbossa in the “Pirates of the Caribbean” films.

He received his nation’s highest civilian honor in 2014, the Companion of the Order of Australia, for service to the arts. NVG

Geoffrey Rush says he was ‘distraught’ over paper’s articles