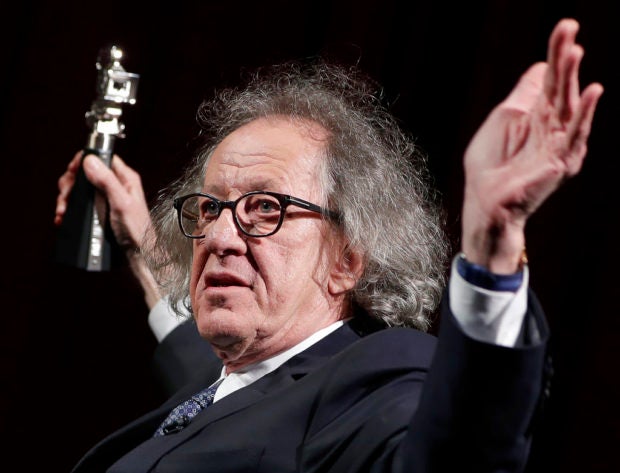 FILE – In this Feb. 11, 2017, file photo, Australian actor Geoffrey Rush poses with his Berlinale Camera Award which he received prior to the screening of the film “Final Portrait” at the 2017 Berlinale Film Festival in Berlin, Germany. Rush has pulled out of a Shakespeare stage production in the Australian city of Melbourne as he sues a Sydney newspaper for defamation. Image: AP Photo/Michael Sohn, File

CANBERRA, Australia — Oscar-winning actor Geoffrey Rush has pulled out of Shakespeare stage production in Australia as he sues a Sydney newspaper for defamation.

Melbourne Theatre Company Artistic Director Brett Sheehy said he received confirmation Monday of Rush’s withdrawal from the role of Malvolio in a seven-week season of “Twelfth Night” that begins on Nov. 12.

Rush cited his current circumstances and medical advice for having to withdraw. “I do so with the greatest regret. I know that I would not be able to provide the necessary creative spirit and the professional stamina required,” Rush said in the statement received by the artistic director.

Sheehy said the company respected Rush’s decision and the resulting casting decisions would be made “in due course.”

The Australian actor is suing The Daily Telegraph for defamation over articles published in December that accused him of inappropriate behavior toward actress Eryn Jean Norvill during the Sydney Theatre Company’s production of “King Lear” in 2015.

Rush has denied the allegation. He argues that the articles portray him as a pervert and sexual predator. Details of the alleged behavior remain vague.

His lawyer Nicholas Pullen told the Australian Federal Court in Sydney in April in an affidavit that Rush had become virtually housebound, barely eats and wakes each morning with a “terrible sense of dread” since the articles were published.

Rush “suffers lack of sleep and anxiety requiring medication” and believes his worth to the entertainment industry “is now irreparably damaged,” his lawyer wrote.

Rush met with the newspaper’s lawyers in a confidential mediation hearing in Sydney last week that suggests the case might soon be settled.

Rush was to appear in “Twelfth Night” with actress Christie Whelan Browne playing Olivia. Whelan Browne is being sued in the New South Wales state Supreme Court by actor and musician Craig McLachlan for defamation.

McLachlan, who is a household name in Australia, left a stage show and a TV series he was to star in was canceled after Whelan Browne and two other actresses — Angela Scundi and Erika Heynatz — accused him of indecent assault, sexual harassment and bullying during a 2014 production of “The Rocky Horror Show” in Melbourne.

Rush won the 1997 best actor Academy Award for “Shine” and has three other Oscar nominations. He is perhaps best known as Captain Barbossa in the “Pirates of the Caribbean” films. MKH

It takes Geoffrey Rush’s genius to play a ‘Genius’