It takes Geoffrey Rush’s genius to play a ‘Genius’ 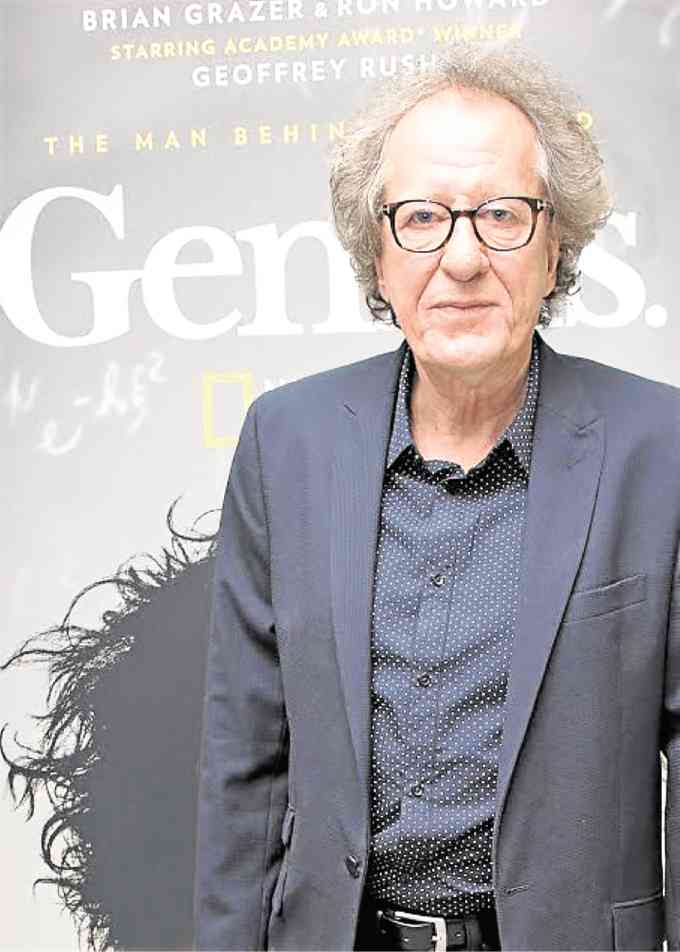 LOS ANGELES—It takes a genius to play a genius, so Geoffrey Rush turns out to be the perfect actor to portray Albert Einstein in the National Geographic series titled, well, “Genius.” Twenty-one years after winning an Oscar and a Golden Globe for “Shine,” where he played another genius (pianist David Helfgott), Geoffrey astounds as the most famous scientist in director Ron Howard’s 10-part series.

“Genius” is about the man behind the wild-haired legendary physicist, based on Walter Isaacson’s book, “Einstein: His Life and Universe.”
As delineated by the Aussie actor, the German icon is shown as humorous, charismatic, wonderfully eccentric and a womanizer. In other words, a “stud muffin theoretical physicist,” as Geoffrey was quoted as saying.

You’ve played some great characters in your career. Did you have any hesitations about playing Einstein? I knew he had an IQ of 160, that he could play the violin and be able to fluently rattle off Heisenberg’s uncertainty principle off his tongue. He had to be relatively attractive in his older age to much younger women and I thought I surely must be on the short list (laughs), at least.

Ron Howard got in touch with me. It was a direct offer. Unfortunately, when they first presented the role to me, I had to regrettably turn it down because I was already committed to another project until September last year.

They were shooting by September in Prague. Then, I thought, “Oh, this is like a character actor’s dream. I’m the right age for this role. It’s not quite like ‘King Lear,’ but it’s a big one.” They came back to me about 10 days later and said, we’ve had a good look at the schedule, and we’ve got other stuff we can shoot with the younger Einstein, Johnny Flynn, my younger doppelganger. They said, what if we started shooting your stuff in November? I said, fine, let’s go.

Were you ever interested in physics, too? When I was about 10, I was obsessed with the Mercury Space Program because, in Australia, we knew when Alan Shepard had gone into suborbital flight, then John Glenn did three orbits. This was groundbreaking.

I then followed the Gemini and the Apollo programs. So, when I was in high school, I said to the vocational guidance officer, I’d like to be an astronomer. What do I have to study? The officer said, you’ve got to do physics, chemistry and advance mathematics, which I did until my senior year in high school. But I was hopeless at it. I just didn’t have a mathematical brain.

What is the essence of playing Einstein? I was fortunate that National Geographic sent me videos of pretty much all the available newsreel footage of Einstein. Once he was in America in the 1930s and onward, there was a considerable amount of material, so there was enough for me to study on how he moved and spoke. He had a very thick German accent.

We made the decision that because the show is an English-language production, we had to find the cadence and sense of a Germanic tune, how the vowels sound, etc. No one would have understood a word I was saying if I did a forensic imitation of his accent.
What did you learn about Einstein that surprised you? I was 4 when he died, so anything I knew about him was probably what the collective unconscious knew. I wondered, “Why that hair?” because everyone during the Second World War had buzz cuts. It could’ve been an old European idea because in pre-First World War, they all had mad-scientist hair. But he took it to the nth degree.

When the Theory of Relativity was ultimately proven, they said to Einstein, everything you’ve written mathematically is empirically observable now, and it proves it. He never got the Nobel Prize for it because there was a lot of anti-Semitic feeling in the Prussian Academy (of Sciences).

It was a revelation to know that he had a greater range of moods in him. When you see all the footage, he’s the most sparkling, twinkling presence. He’s very childlike. If he was in here now, he’d be checking out the lights, the exit sign, then come back to you. He’s such a good Everyman character.

Other than his genius, what do you admire the most about him? He’s become one of those people that, if people ask me now, who would you invite from history to dinner, he’d certainly be on the list. In the Walter Isaacson book that this 10-part series is based on, there are Einstein letters that you can read.

There was a congenial, humanistic soul in this man. If he was at a dinner party, he’d probably say to everyone, “So, what have you been doing?” His level of curiosity for how people operated was a great attraction to him.

Do you share any characteristics with him? When they first offered me the role, I got my daughter—who does photography—to take a photo of me at a particular angle that matched a classic shot of him. Then, I said to her friend, who’s great at Photoshop, could you take 15 percent of Einstein and morph that into my face? I wanted to see whether I could approximate something that was correct, because I have a longer face. I’m taller and skinnier.

At the costume fitting, I said, I’m going to need very carefully placed padding so I’d look much rounder and stockier.

What’s your IQ? I did an online IQ test. I’m not telling you what my score is. It’s closer to moron (laughs). I was amazed. Colin Firth has an IQ of 160. I never saw that in him (laughs). Did he cheat? But then, when I look back at his humor, he’s bright. When Colin makes speeches, they come out perfectly structured. Geniuses see things in elegant, precise shapes.

I can’t believe it’s been more than 20 years since “Shine.” Yes, last year, we went on a “Shine” anniversary minitour of Australia with David Hirschfelder (music), Jan Sardi who wrote the screenplay, and Scott Hicks, who directed [the movie]. The National Film and Sound Archive (of Australia) has done a digital print. We were all going, wow, 20 years ago and the film still looks good. “Shine” holds up well.

Can you talk about the past 20 years? What did “Shine” bring to you? I have a huge number of frequent flyer points (laughs), but you can never use them unless you book four years in advance (laughs). They go, oh, sorry, there are no seats available. After “Shine,” I thought, there was nothing to lose.

We had no projections of the film even playing outside Australia. It was a low-budget, independent film. After that, I got offered a biopic about Liberace and I thought, oh, there’s no way I’m going to do another piano film.

I was in the too hard basket, so I made radical choices, like, the first film I did was “Les Miserables” (as Javert) with [director] Bille August, because I thought I’ve never played a cop.

I allowed myself to keep pushing for different roles, like when I was in theater, where you just didn’t know what genre or character or what size of role you were likely to do next.

Behind every actor’s low-lying anxiety, there’s always that wondering about, will the phone stop ringing? It hasn’t, but we’ll wait and see how this (“Genius”) goes.