Korina Sanchez, Mar Roxas mark 9th wedding anniversary away from each other 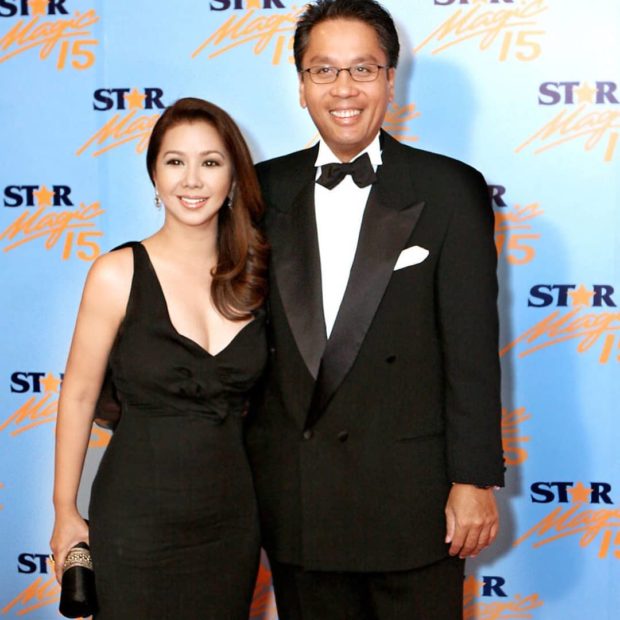 Korina Sanchez and former Department of the Interior and Local Government Secretary Manuel “Mar” Roxas celebrated their ninth wedding anniversary yesterday. Unfortunately, they had to do so hundreds of miles away from each other — Roxas was in a meeting in Japan while Sanchez had a commitment to fulfill in Hong Kong.

Sanchez took to Facebook yesterday to mark the special occasion. Uploading a screengrab of her FaceTime video call with her husband, the “Rated K” host thanked science and technology for giving her the opportunity to talk to her husband despite the distance separating them.

(On our wedding anniversary, my husband and I are away from each other. He is on an appointment in Japan, and I’m on a commitment in Hong Kong. But we still have a plan to meet. Thanks to science and technology, [we are at least able to do so through] FaceTime for the meantime. And I screwed up my screenshot again. My eyes are closed [in the photo] again.)

Huhuhuhu… on our wedding anniversary magkahiwalay kami ni husband.😫 He is on an appointment in Japan, and I'm on a…

In a separate post, Sanchez penned a sweet letter, sharing what she felt tying the knot with Roxas in midlife. She uploaded a photo of her and her husband hugging during their wedding ceremony in 2009, stating the photo says “I love all of you.”

“He was more than 50 and I more than 40,” she recounted. “Many at the time couldn’t believe we would actually do it. Sa totoo lang (Truth be told), many today still doubt it’s for real, or want to think we’re on the rocks, haha!”

9 years. Imagine. In our library, among the books, are photos of a day Mar and I, for most our lives, never thought…

“The thing about being self-made is you tend to think you are self-sufficient in every way,” she said. “We thought we were. Until we met each other. (Yeehee!)”

Sanchez chose to focus on the positive aspect of marriage in midlife, stating it is what binds them together. “While there are downsides to marrying at midlife, the uppest upside is that we have more of our evolved selves to share with another,” Sanchez noted. “I’d like to think this is precisely what keeps Mar and I together.” JB

WATCH: Korina Sanchez gives away slippers to neighbors in Cubao as ‘pa-birthday’

Korina Sanchez bets on lotto for the first time, loses

Read Next
Why Pia Wurtzbach agreed to be the sexy calendar girl of a liquor drink
EDITORS' PICK
Enforcers who abuse anti-terrorism measures will be punished – Lacson
COOCAA TV Bounce Back Sale offers up to 50% off
Smart launches new LTE-Advanced Pocket WiFi Plans starting at P699 per month
Cherry Mobile teams up with Cloud Panda PH, launches online store
Villanueva urges gov’t to ramp up aid for unemployed workers amid pandemic
COVID-19 infection in PH soars to 21,340; 714 new cases logged
MOST READ
Can Crawford survive the Pacquiao blitz?
Busted flood gate prompts probe of Bulacan dam
Something about KC that worries mom Sharon
Kim Chiu’s viral dance video has no violations, MMDA agrees
Follow @KMatrianoINQ on Twitter
Don't miss out on the latest news and information.