Aga Muhlach divides netizens with message to Sen. Trillanes, but gets thumbs up from Mocha Uson 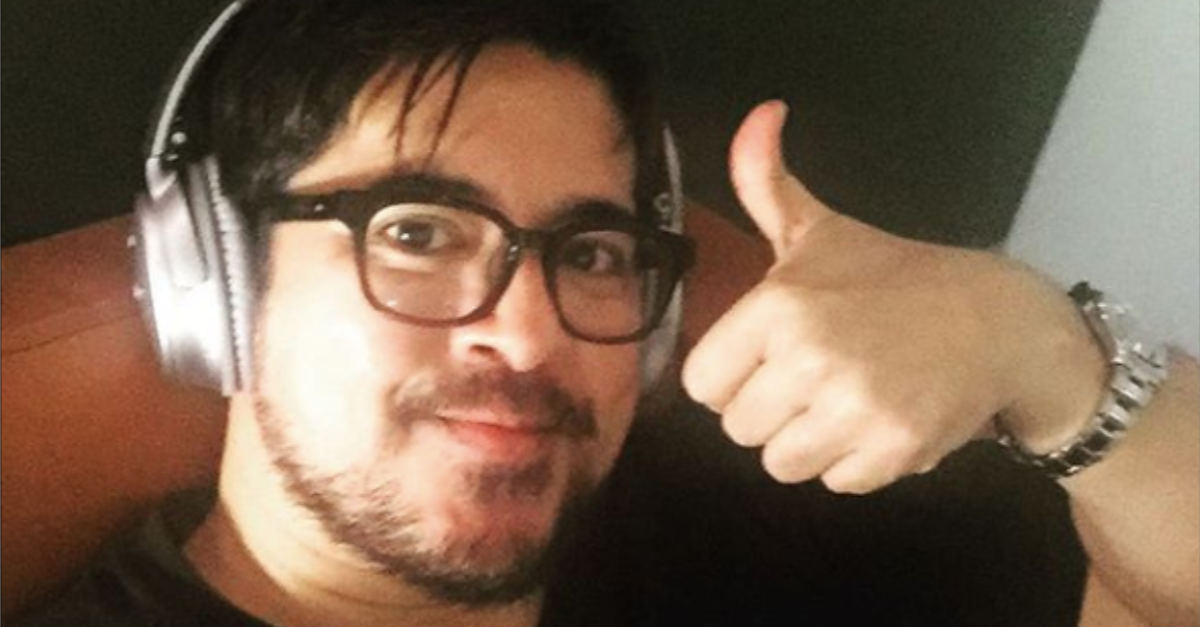 Aga Muhlach and Bea Alonzo have drawn mixed reactions for their recent statements on a politician, but Muhlach who uttered the more vocal statements drew the more intense comments.

Some netizens noticed that one of the clips had been taken down on the ABS-CBN website, particularly in the segment “Tanong Mo, Mukha Mo” where guests are made to ask a question to the person whose picture is flashed on a screen.

The clip has since been uploaded by netizens on Twitter.

Disclaimer: video is a property of abscbn, no intention of infringing their copyright. pic.twitter.com/aLteURNGqh

During the episode, Muhlach and Alonzo were shown the picture of Senator Antonio “Sonny” Trillanes IV.

Trillanes has been a vocal critic of President Rodrigo Duterte’s administration. Duterte ordered his arrest last September, stating that he revoked the senator’s amnesty on the grounds that he had supposedly not applied for it.

In the clip now making the rounds on social media, Alonzo is seen looking at her co-star intently after the picture was flashed.

When Alonzo reminded him to ask a question, he said, “Bakit ba? Ano bang gusto mo mangyari? (Why? What do you want to happen?)”

“Stop, collaborate and listen,” urged Muhlach, alluding to the Vanilla Ice rap song, “Ice Ice Baby” back in the 1990s, which is incidentally around the time when the actor was also at the heights of his fame.

Audience members could be seen applauding his statements. While it seemed there was plenty of support for Muhlach on the show, on social media, the actor received both praise and criticism.

Netizen @pinoytapsilog claimed that “yellowtards” — a derogatory term for the administration’s opposition — must have been behind the viral clip getting deleted. However, those who have criticized Muhlach have also been sharing the clip.

Yellowtards are so triggered and incensed at Aga Muhlach's opinion of Trillanes. They want the viral video clip of Muhlach obliterated from social media and a boycott of his new movie, "First Love," with Bea Alonzo. It's proof they can't handle DISSENT. pic.twitter.com/kA5XsDE7zA

Jhem Pua (@jhempua) said of Muhlach’s guesting: “I just loved Aga Muhlach even more. Simple lang ng sinabi pero may sense (What he said was simple but it made sense).”

“Also, why delete the video? Sad time for freedom of speech.”

One @TishaCM defended Muhlach: “Yellows are just [butt-hurt] that relevant actors support this [government] — the success of Duterte is the success of PH.”

“His movies helped Pinoys tide over the most trying times during Cory [Aquino] [and] all [governments] thereafter. He has the right to speak up.”

Yellows are just butt hurt that relevant actors support this govt—the success of Duterte is the success of PH. Aga Muhlach has lived thru govts since Marcos. His movies helped Pinoys tide over the most trying times during Cory & all govts thereafter. He has the right to speak up. https://t.co/wEuzS7G0bY

Those who disagree with what was said in the segment have called for boycotting the movie and unfollowing Muhlach’s social media accounts with the hashtag #BoycottAgaBeaMovie.

Abi Aquino (@andaquino) said she had planned to watch the movie but the “GGV” guesting changed her mind: “I refuse to support people who have myopic view of how democracy works. FYI, Mr. Aga Muhlach, having an opposition is part of any democracy.”

I was planning to watch #FirstLove of Bea A. & Aga Muhlach, but i’ve decided not to after watching a clip of their #GGV guesting. I refuse to support people who have myopic view of how democracy works. Fyi, Mr. Aga Muhlach,having an opposition is part of any democracy.

One @MeteorCrissy said she would rather eat out than watch the movie after the actors’ statements.

Was about to bring my mom to watch this Bea Alonzo and Aga Muhlach movie this weekend. But after learning about this eh wag na lang. Kain na lang kami sa labas. I will also turn down my BFF's invite na samahan siya to watch also this movie. Magoging busy ako. https://t.co/1XG2ZKGgzw

In response, some have further promoted the movie, such as former Presidential Communications Asec. Mocha Uson who felt that Muhlach hadn’t said anything wrong. 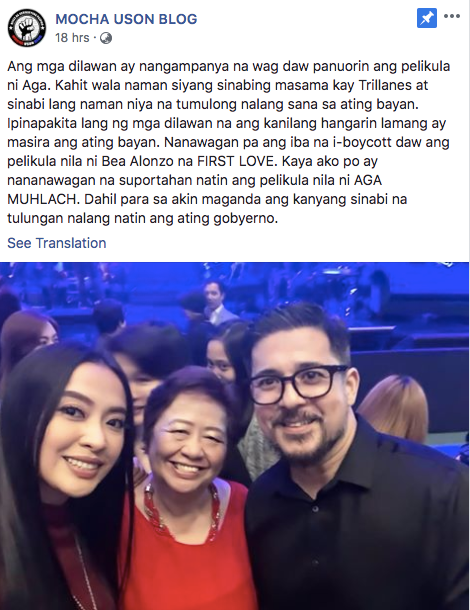 “A decent person will NOT ‘collaborate’ with state-sponsored exterminations; with corrupt officials, with no accountability; with people who caused inflation,” argued one Markus Villa (@makeapoint690).

A decent person will NOT "collaborate" with state-sponsored exterminations; with corrupt officials w/ no accountability; w people who caused inflation.

“Criticizing any of the President’s wrongdoings is part of his job as a Senator and as a Filipino citizen, so anong sinasabi mo diyan (what are you saying) Aga Muhlach?!?” said one @elyasjuan.

@TrillanesSonny criticizing any of the President’s wrongdoings is part of his job as a Senator and as a Filipino citizen, so anong sinasabi mo diyan Aga Muhlach?!?

Alonzo, Muhlach and Vice have yet to comment on the matter.

Aga Muhlach has forayed into politics before, running in 2013 under the Liberal Party for Congress. But it would appear that Muhlach also has ties with the President since Duterte himself visited the Muhlach family during the wake of the actor’s father last May. JB